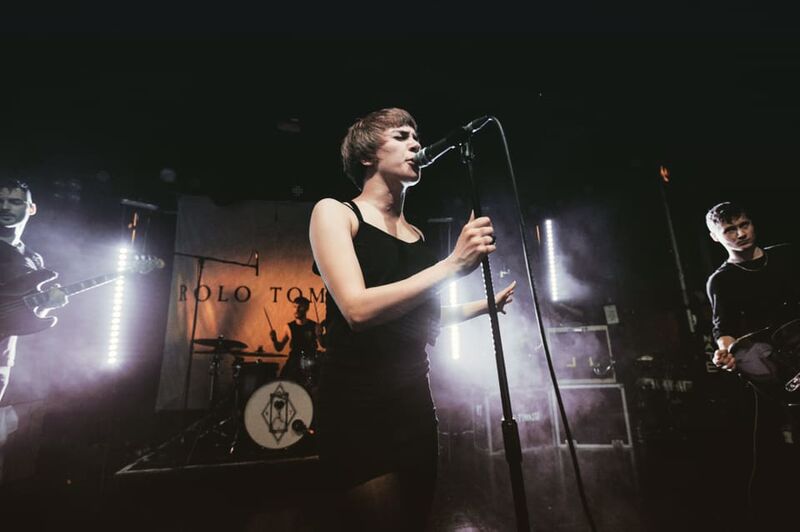 Rolo Tomassi: How A Love of Cinema Inspired the UK’s Most Innovative Metal Band

It’s no secret that guitar music is currently dying. 13 years ago, bands like Green Day and Kings Of Leon fought the good fight, briefly resurrecting the riff and bringing rock music back to stadiums – but their victory was short-lived. CDs soon faded into obscurity. Rockstars drifted out of the spotlight. And both were ultimately superseded by super producers, streaming and increasingly slick-looking Audio-Visual DJ sets. For many indie and mainstream guitar acts, it was a career-ending shift. Yet, for a band as eclectic and abrasive as Rolo Tomassi, taking centre stage was never the goal.

Over the last 13 years, brother-and-sister duo James and Eva Spence have used music as a means of making sense of the world. Forming Rolo Tomassi at the ages of 17 and 15 respectively, the siblings ignored musical trends, quietly writing songs that mirrored the world they saw – charting a sonic map of life’s highs, lows and all the indifference and discomfort in between.

As you might expect, it’s an approach that’s resulted in intensely unpredictable music. On the band’s fourth record, 2015’s ‘Grievances’, soothing soundscapes suddenly descend into guttural screams. Dream-like piano breaks seem to appear out of nowhere and jagged guitars soon collapse under the weight of an unexpectedly uplifting chorus.

In other words, Rolo Tomassi’s music engulfs and surprises the listener in a way that few metal bands really manage. Yet while it would be easy to point to a wealth of artists that could take credit for inspiring their sound, keyboardist and vocalist James Spence reveals that Rolo’s unique brand of noise actually comes from approaching songwriting differently. From a desire to write metal as if composing a film score.

From Movies to Moshpits

“I’ve always really loved films, and one of my obsessions over the last couple of records has been to write a film soundtrack,” explains James Spence. “[When I’m writing] I think back to particular bits in films – like say, scenes from The Talented Mr Ripley or Shutter Island — and remember the way the music was used there and the emotional response it got from me. And I want to create something that’s going to do that to other people.”

With his sister and lead vocalist Eva usually writing out all of the album lyrics before a single note has been played, James and his bandmates already have a storyboard to write to, an overarching concept begging for its own score.

“I think that desire to [write] a soundtrack, coupled with my sister’s lyrics which are autobiographical — frank and very self-confessed – makes [writing Rolo Tomassi records] kind of like writing a soundtrack in our own way,” he continues. “Just for a film that no one else has seen.”

Indeed, a touch of the cinematic is an essential part of Rolo Tomassi’s DNA – and as keen movie mavens might have spotted, even the band’s name is a nod to a Hollywood classic.

“L.A. Confidential was a film my mum used to put on quite a lot, and it just really stuck out,” recalls James. “It had a very intense, psychological edge to it. I remember watching it, and, the second I heard the line ‘Rolo Tomassi’, thinking: ‘This is it – this is my band name’. There’s just something about the aesthetic of it written down, the way it sounded… It was us.”

A Soundtrack To Your Escape

It’s no coincidence that Rolo Tomassi’s music also has a very intense edge to it. Fascinated with films that explored the darker underbelly of humanity, James sought to write music that channeled all the complexities and difficulties of life into something grander and otherworldly; something all-consuming.

“For me, music as an art form has always been about escapism,” says James. “Not necessarily fantasy, but something that exists outside of the banality of your nine-to-five. And you know, most of us still work regular full-time jobs, so for us, writing [music] is escapism from that too. As a fan, listening to it is an escape from that world, too… And I think the more fantastical you make music, the greater that escape becomes.”

While Rolo Tomassi’s early work was a lot more self-contained and frenetic, as the band members matured, so did their music — and this cinematic approach slowly started to leak into their sound. Put on the quintet’s last two albums – ‘Grievances’ and 2018’s ‘Time Will Die and Love Will Bury It’ – and they beg to be consumed in a single sitting, taking listeners on a journey that wildly ebbs and flows between the uncomfortably intense and the quietly melancholic.

For James, there’s nothing better than re-watching your favourite film and discovering something new — and that’s the same thing he looks for in music.

“I’ve always been a fan of music where there is more to it than just what’s on the surface… the kind of records where you get something new with repeated listens,” says James. “My favourite records are ones that you listen to from start to finish and you don’t really know where things start and things end –and that’s the way I like to bring [albums] together. When I consider the way that music should flow, I’m thinking about how things would sync in scenes in films. Especially with the changeovers in between tracks. This is a massive cliché but it’s more of a journey; something you put on and get completely lost in.”

It’s an approach that has recently bled into the band’s live shows. Despite relentlessly touring for over a decade, it’s only over the last few years that Rolo Tomassi’s audience has started to grow. Thanks to a new wave of fans discovering them, the quintet now command bigger crowds in grander venues – and the budget to bring a touch of the cinematic to their performances.

“It is really, really cool,” says James. “It feels like it’s taken a little bit of time for us to get there… but now we’re actually seeing tangible rewards for doing things our way. I feel really pleased and proud to be making music with my friends and sister and that music like ours is managing to fill venues bigger than we ever dreamed of.”

“But now, it needs to be about more than just the music,” explains James. “We started out with a very basic lighting setup which was dictated by the amount of money we had, and having played a bunch of shows this year, we’ve got a bit more money that’s disposable to expand on that. There’s been discussion of [adding] an AV element to it [our shows] as well.”

For James, this AV element is doubly important, because for him much of his inspiration comes not from what he hears, but what he sees.

“It’s why I like a lot of sci-fi films,” he says. “A lot of the visual cues within the genre, the big, wide open spaces, — like the part at the end of Interstellar where he’s falling through all the colour; the rushing intensity of all the colour. That’s a bit of a throwback to the end of 2001, or at least it borrows f***ing heavily from it. But it’s that kind of stuff… something that feels slightly larger than life and fantastical. That’s just something I look at and I can hear music.”

Categorising people, sorting them into different boxes, might be instinct to many, but refusing to do so has made Rolo Tomassi more than just a rock act. If you’re guilty of pigeonholing bands like Rolo Tomassi, you’d do well to take another look at this fence-leaping five-piece. There’s far more crossover between art forms than many might be prepared to explore — but for Rolo Tomassi, it’s their raison d’etre. Now, with their most ambitious record receiving almost universal critical acclaim, it just goes to show — daring to be different sometimes pays off.