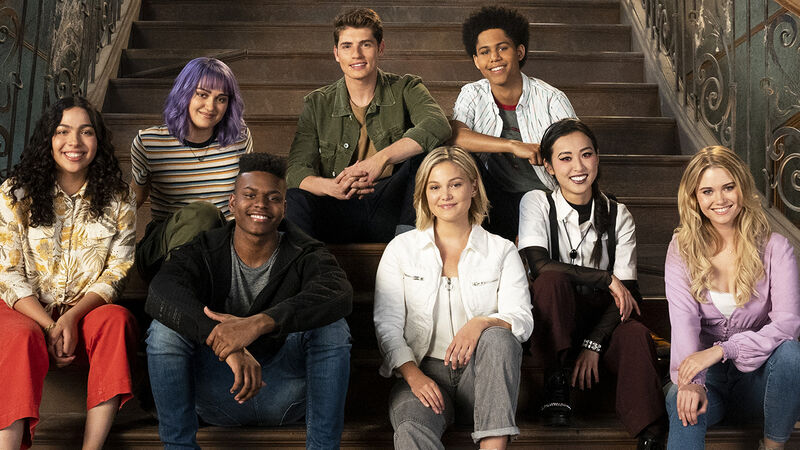 While the Marvel TV series that aired on Netflix had several character crossovers, that was something built into their DNA, since they were always meant to have the heroes team up in The Defenders. However, outside of that Netflix realm, there has never been a Marvel TV show crossover involving heroes from one network or streaming service’s show meeting heroes from another – until now.

When Marvel’s Runaways premieres December 13th on Hulu, a very notable episode will involve the title characters teaming up with Tandy Bowen (Olivia Holt) and Tyrone Johnson (Aubrey Joseph), the two young heroes at the center of Marvel’s Cloak & Dagger, which has aired on Freeform.

During a press day on the Los Angeles set of the show late this summer, the show’s Executive Producers explained how the crossover came to be, while Runaways cast members, along with Joseph, talked about what it was like to finally be filming it. In addition, Fandom spoke to Holt (who, along with some of the Runaways cast, was unable to join interviews that day on set because she was busy filming scenes for the crossover) soon after filming wrapped for her perspective.

THREE YEARS IN THE MAKING

While there was plenty of speculation from afar about a potential Runaways / Cloak & Dagger crossover before it became real, Runaways Executive Producer Josh Schwartz explained, “For us, it’s been a three year conversation. Since the show premiered, we’ve been bothering Jeph Loeb saying, ‘Can we please do this crossover?’ It’s so essential and integral to the comics. Cloak & Dagger was shooting their pilot around the same time we were shooting ours. Both shows launched around the same time. So we’ve always wanted to do it, and the idea that there are these young heroes walking around in LA and Louisiana who don’t know each other just felt too good to miss out on.”

As far as finally making the crossover happen, Runaways EP Stephanie Savage said, “This year, we really included it as part of our first pitch to Marvel, that this was something that we wanted to do, and then the conversation started to really happen. Because it’s a big deal to put two shows that aren’t even on the same network together.”

Olivia Holt said that after she and Joseph were asked so many times in interviews and by fans if a crossover might happen, finding out it finally was real, “Was so surreal. That’s the question that both of us get asked and I think even for the Runaways cast – ‘When are you guys going to do a crossover?!’ So I think that the fact that we actually made it a reality and the episode is now finished being filmed, it’s crazy. We definitely put in the work, and we’re all really proud of it and really excited for everybody to see it.”

Aubrey Joseph said that for him, “I had a feeling that it would happen just because the power of Marvel. They listen to the fans. It got to the point where we were being about a crossover in almost every single interview. They’re not just going to keep letting this happen and not make an effort.”

And while the crossover is happening on Runaways, Aubrey stressed, “Joe Pokaksi, our [Cloak & Dagger] EP who is very hands on with the show, is definitely very involved. At the end of the day, it’s his baby. And it was very cool, before we even got to shoot, we got to visit the Runaways writers room. They pitched the whole thing to us and told us what we would be doing. And Joe was right there every step of the way. Joe came to the table read. He was heavily involved and made sure we felt comfortable. But they did a very good job writing our characters into the show. You can tell they did their research about Ty and Tandy’s relationship and who Tyrone and Tandy were as individuals.”

Said Holt, “Aubrey and I are a fan of Runaways in general, so to be able to go in [the writers room] and fangirl for a little bit and then talk to us about what the crossover episode would be was so exciting and I think everyone’s going to be really thrilled with how this episode is going to turn out. It is quite above and beyond and everybody has a really spectacular story in it, and I think everyone is very proud of it.”

Given all the secrets they need to keep making Marvel’s Runaways, Ever Carradine (“Janet Stein”) laughed that when the crossover was finalized and began filming, “The best part was that it was immediately [announced], and everybody knew. Because we get to the table read and the kids are there and they’re so gorgeous and the episode is really, really great. I put my phone in my bag. I was like ‘I’m not going to be the one to spoil this.’ The next morning it was out.”

The Cloak & Dagger and Runaways casts had met previously but asked what it was like to finally work alongside Holt and Joseph, Rhenzy Feliz (“Alex Wilder”) replied, “It’s awesome. I like them a lot as humans. Olivia and Aubrey are super cool people. Having them on set is awesome, getting to know them better is awesome. Apart from that, the story we’re getting to tell with them, seeing their powers in action, seeing them get to do things is really cool too. Seeing the teams mesh, we’re teenagers at the end of the day, so it’s like the little snippets and jokes and witty humor going back and forth is all really fun too.”

Said Allegra Acosta (“Molly Hernandez”), “I think it’s going to be really satisfying when the fans see that episode because it’s super epic and Aubrey and Olivia are these amazing, super talented people. I love working with them.”

As for the Cloak & Dagger cast members perspective on coming to the set of Runaways, Holt laughed, “I believe they have like 15 series regulars, whereas it’s often just Aubrey and I on scenes on our show. It was definitely a bit of a shock when we stepped onto the set and we were like ‘Whoa, there’s so many actors!’ And on top of their amazing crew, there were so many people on set. Everybody has such an incredible work ethic, and it really made the days go really fast, which was really awesome. And everybody works so hard on that show, and I think that’s why it’s such a success, because everybody really does believe in it. And they make it look so cool. Again, Aubrey and I are such huge fans of the show, and so, to be able to watch exactly how they do it was pretty surreal for the both of us.”

Said Joseph, “I have a lot of scenes with Ariela [Barer]  and Gregg [Sulkin], but everybody in the cast is really cool and I think the way that this episode has been positioned and written is one of the biggest episodes I’ve ever been a part of.”

Joseph remarked that one interesting component of teaming up the characters is, “Our show is obviously very dark in comparison to this show. [Runaways] is a lot more light-hearted. It’s more rooted in the fantasy world, which has been a lot of fun for me cause I don’t have to come to work every day and scream and cry. I remember one of the notes they had to give me and Liv was yeah, ‘This show is a lighthearted show, so this is supposed to be a funny. Just have fun with it.’”

James Marsters (“Victor Stein”) explained, with a grin, that the only downside of having these guest stars was, “They have superpowers, which means we now have to have the special effects to film those superpowers. So you have all the Runaways, all their abilities, and then you have Cloak and Dagger with all of their special effects. ‘We’re going to be here all day, man! Here we go.”

So what’s it like actually seeing the characters interact? Said Schwartz, “It’s really fun. Cloak and Dagger are here to save the day, but they’re also here to help save some relationships as well. And so they’re dropping into our kids’ world and they’re like, ‘You guys have a dinosaur and you live in an underground mansion?’ There’s a lot for them to catch up on.”

Schwartz added that bouncing the Runaways off Cloak and Dagger, the hope was, “That we could get to see a little bit of a different side of everybody. And we are a little bit more self-referential sometimes in the humor of the show, and so pulling them into that part of it and watching Cloak have to witness Chase and Gert bickering as they make their way through the Dark Dimension was fun to incorporate. At the same time, there is an earnestness and a gravity that Cloak and Dagger bring that I think also really resonates in our show as well.”

Added Savage, “It was very applicable to the story. The mission that they’re on is extremely serious, very high stakes, and they kind of brought that gravitas.”

Virginia Gardner (“Karolina Dean”) said that when it comes to Karolina and her thoughts on Ty and Tandy, “At first she’s very skeptical because everything that’s happened to them in the past. They don’t know who they can trust anymore, any of the Runaways. These new characters are entering their Hostel, claiming to help them, but they don’t know whether they can trust these two new people or not. They end up becoming great allies for us, hopefully to the point where we can go help them out on Cloak & Dagger also because it’s a really good team that we’ve made. It’s probably my favorite episode so far.”

Holt noted, “We definitely see Tandy interact with Nico and Karolina a lot in the episode, and I think that’s going to be really nice for the audience to see. Tandy doesn’t have a lot of female relationships in her life, and the ones that she does have is mostly with her mom, and we all know how that relationship is very complicated. I think it’ll be very exciting for the audience to see Tandy interact with two female superheroes that are her own age.”

Said Joseph, of the bonds that form between the two groups, “I can’t give away the premise of the episode, but I think the thing that connects them is just helping people. One, because, we didn’t know that there were other kids who had powers like us. We thought we were the only kids in the world. So just resonating with that… I think the main thing is just the fact that they’re teenagers that are like us.

Holt observed, “I think the only thing that Tandy and Tyrone know are New Orleans, so for them to step outside their comfort zone and go to a different city and meet different kids that have powers as well, it’s like a culture shock for them. So for them to go and have that experience and to gain a lot of perspective and know that they’re not alone, I think that’s the most special part about this crossover episode. The challenge in itself was for these two kids to leave New Orleans and to see what else is out there and what else they can do to help whoever they can, and I think they ran to the right place. It’s going to be really special for everybody to see.”

All 10 episodes of Marvel’s Runaways Season 3 will be released December 13th on Hulu.