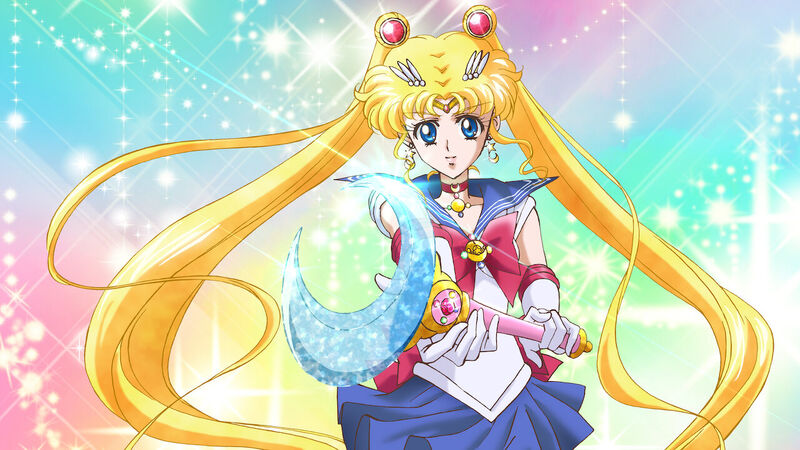 Sailor Moon, created by Naoko Takeuchi and serialized as a manga in December 1991, is objectively one of the most popular and influential Japanese manga series of all time. It tells the story of Usagi Tsukino, a 14-year-old schoolgirl (and reincarnated princess) who becomes the Sailor Senshi (aka Sailor Guardian) Sailor Moon after meeting a talking cat named Luna on the way to school.

In the beginning of the series, Usagi is presented as a clumsy crybaby who gets bad grades and would rather play video games than study for school. After Usagi meets Luna and is given a transformation brooch to turn into Sailor Moon, she hears her best friend Naru being attacked by a monster at her mom’s jewelry shop. Sailor Moon to the rescue!

Usagi proves to be a realistic and relatable heroine in the making. Although she bravely goes to Naru’s aid and introduces herself as Sailor Moon (along with some great smack talk), the monsters initially terrify her to literal tears. These tears create supersonic waves that temporarily stop the monsters in their tracks. At this moment, Tuxedo Mask—Usagi’s mysterious love interest—appears and encourages Sailor Moon to fight despite her fears. With that, Sailor Moon defeats the monster, using her attack “Moon Tiara Boomerang.” With her first outing as Sailor Moon, Usagi shows that courage is more important than fear.

If you think Usagi was fighting alone as Sailor Moon, then think again. Over the course of the series’ first eight episodes, we see Usagi befriend fellow classmates that end up becoming Sailor Mercury, Sailor Mars, Sailor Jupiter, and finally Sailor Venus. These episodes are emotionally touching because Usagi befriends schoolgirls that people have the wrong first impression of. For example, genius girl Ami Mizuno appears to be a standoffish person, but is actually just shy and observant, while “scary” tough girl Makoto is actually friendly and a great cook.

By befriending Ami Mizuno, Rei Hino, Makoto Kino, and Minako Aino, Usagi earns their trust before they fight together as Sailor Senshi. More importantly, they become positive influences on each other. Usagi becomes braver with a bigger sense of purpose, while the other girls feel more at ease with themselves and with other people. These episodes also demonstrate what is perhaps Usagi’s greatest power: her kind, loving nature. Although this might seem overly sentimental, this literally gives Sailor Moon and the other Sailor Senshi power at crucial moments.

Using the Moon Stick
for the First Time

One of the most emotionally poignant moments that demonstrate the power of Usagi’s kindness is when she wields the Moon Stick for the first time as Sailor Moon. This occurs in the sixth episode of Sailor Moon Crystal, “Tuxedo Mask,” when Zoisite (one of the antagonists) brainwashes citizens into finding the legendary silver crystal. Usagi initially feels powerless to do anything until she runs into Tuxedo Mask.

Up until this point, Usagi had no effective attacks that could stop Zoisite. This causes her to feel bad about herself, especially when she compares herself to the other Sailor Senshi. When she tells Tuxedo Mask this, he empathizes with her due to his own lack of power and his own desire to find the legendary crystal. It is at this point that Usagi remembers her desire to protect her new friends.

Just as things seem dire for the other Sailor Senshi, Sailor Moon uses her Moon Stick and the attack “Moon Healing Escalation,” which heals her teammates and the brainwashed citizens while also critically injuring Zoisite. Sailor Moon’s protective nature gave her a unique ability, and displays the power of her tender heart. This ability would come in handy in future episodes as Sailor Moon continued to battle the Dark Kingdom and eventually learn the truth about the silver crystal.

Transforming Into Princess
Serenity for the First Time

Yet another demonstration of the power of Sailor Moon’s heart comes in Season 1 Episode 9, “Serenity -Princess-,” when Tuxedo Mask dies protecting Sailor Moon from antagonist Kunzite’s attack. By this point, Sailor Moon has fallen in love with Tuxedo Mask. Naturally, seeing him die in front of her causes her immense grief. At this moment, her tears create the legendary silver crystal everyone has been searching for as Sailor Moon becomes Princess Serenity and remembers her past life.

This moment is powerful for a couple reasons. The most important is that Usagi, previously mocked for her “crybaby” nature, ends up summoning a powerful and legendary crystal with her tears. The other is that Usagi’s awakening as Serenity is given emotional weight as she remembers that Tuxedo Mask is actually her past love, Prince Endymion, and that he also died in the past to protect her. Now Usagi has lost her true love twice, and must protect the legendary silver crystal in the aftermath.

Of course, this is easier said than done, since Usagi has suffered a major trauma. Her gradual recovery from this is deeply poignant because it shows how resilient Usagi is and how much she has come to rely on her friends. In a particularly touching scene from the same episode, Usagi is in her room, alone in the dark, and her friends come to visit her. When they notice how much longer Usagi’s hair has gotten from her brief transformation into Princess Serenity, they offer to cut and style it. Although Usagi’s longer hair represents her awakening as Serenity, it can also be interpreted as representing the burden that she now carries. As a result, her friends cutting it back to its previous length demonstrates how they will help Usagi lessen the burden she has as a newly awakened princess.

Channeling the Spirit
of Her Future Self

When you consider that Neo-Queen Serenity is unconscious and Usagi is unable to transform, you’d think that Usagi would give up. Although she initially doubts herself, she remembers that there are more important things to protect than just herself. This courage is noble and resembles the bravery and courage of her future self. As a result, Usagi is able to defy the Black Moon’s power with Neo-Queen Serenity’s will, gain the power to transform into Sailor Moon, and give her friends the power to transform into Sailor Senshi again.

Fighting Alongside
Her Future Daughter

In addition to battling the Black Moon, Sailor Moon Crystal Season 2 sees Usagi and her partner Tuxedo Mask also deal with Chibiusa, a mysterious girl who initially fell from the sky on the present day earth. Given that their previous enemies came from beyond the skies, Usagi thinks that Chibiusa is an enemy for almost six episodes. It also doesn’t help that Chibiusa is clingy with Tuxedo Mask, causing Usagi to become jealous. It isn’t until Chibiusa tells Usagi that she is her future daughter and needs her help that she starts to trust her.

Prior to this, Chibiusa had been feeling lonely, unloved, and unworthy of her mother’s power. As it turns out, Chibiusa is very much her mother’s daughter, especially when her tears of grief create her own silver crystal and give her the power to transform into Sailor Chibi Moon. In addition, Chibiusa is also given her very own Moon Rod that is just like the one Sailor Moon wields. As a result, Chibiusa gets to fight side-by-side with the past incarnation of her mother and father and finally take her first steps as princess of the future earth. Likewise, Sailor Moon develops a maternal side as she begins to empathize and work with her future daughter.

Using the power of her crystal, Sailor Moon compels everyone to stop fighting and gets them to combine their powers, which summons a powerful Holy Grail. When Sailor Moon uses it, she transforms into an evolved form known as Super Sailor Moon, gaining the power to overcome the Death Busters. Not only does this prove Sailor Moon’s unwavering belief that everyone can work together, but this also later inspires Chibiusa to grow as a Sailor Senshi. In a later episode, Chibiusa would get her own Holy Grail and transform into Super Sailor Chibi Moon.