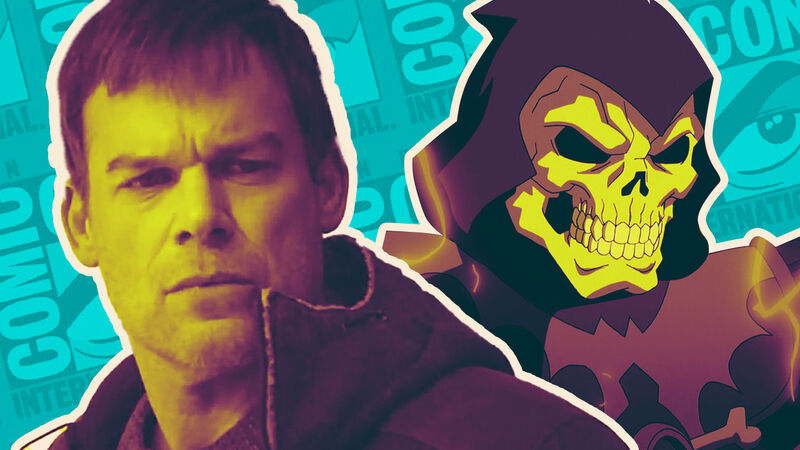 San Diego Comic-Con 2021 — or the Comic-Con@Home incarnation of it at least — is in the books, and while there were a lot of panels, there were a few that definitely stood out.

During the course of the con, a lot of new trailers, footage, and info was released on new and returning projects and we saw all sorts of spikes across our wikis at Fandom, as fans looked to dig deeper into these worlds. But what got the biggest boost during Comic-Con? Plenty of our communities saw notable spikes throughout the convention, including The Walking Dead (which had multiple panels for its three different TV series), the Arrowverse (thanks to a Legends of Tomorrow panel), Blade Runner (thanks to a panel for Blade Runner: Black Lotus), and more, though we’re focused here on a few that had some of the biggest jumps in activity.

Read on for the titles that stood out and the characters people were most interested in, which included some surprises…

Masters of the Universe: Revelation

To be fair, there was a lot of factors with this one, as the panel for the new Netflix animated series — a follow-up to the original 1980s show — was debuting simultaneously with the show itself. But the intersection of the two certainly got attention, as we saw a huge 589% increase to the Masters of the Universe community the day of the panel. Fans may have been debating the direction the new series went, but they were clearly invested in it.

The most popular page on the wiki was an interesting one – Scare Glow, the spooky villain who appears in just one episode of Revelation (in his first-ever appearance in animation). The second most popular page was for Teela, who is centerstage in Revelation, followed by He-Man in third. The fourth most visited page was for another single-episode character in Revelation, He-Ro, who has an interesting place in Masters of the Universe lore thanks to earlier stories he was intended for that never got told.

Dexter was an incredibly popular show during its eight-season run and even though there was a lot of backlash for how it ended, there clearly is still a lot of interest there as the revival season approaches. The Comic-Con panel for Dexter revealed the full title for the new series, Dexter: New Blood, and a trailer depicting Dexter in a new, snowswept setting far different from his Miami past. But if there’s a sign you can’t escape your past, it’s Dexter’s wiki, which jumped 120% the day of the panel.

What stands out here is the most visited page, which was the one for Debra Morgan, Dexter’s sister, who is very much deceased. Still, with John Lithgow recently saying Jennifer Carpenter would be back alongside him in some capacity in New Blood — which isn’t too shocking considering Lithgow’s own character, Arthur Mitchell/The Trinity Killer, is also dead and Dexter is established to imagine himself talking to dead people — it’s understandable people are thinking of Deb. After the Dexter wiki home page as the second most-visited page and then the page for Dexter Morgan himself, the fourth biggest page in the wake of the panel is also particularly notable, as it’s for Hannah McKay, Yvonne Strahvoski’s character from Dexter Season 7 and 8. As far as we know, she won’t be in New Blood, but people are clearly still wondering about Dexter’s murderous kindred spirit and if we could ever see her again…

The title to get the third biggest boost from Comic-Con on our wikis is a bit of a surprise, as it’s more of an under the radar cult series than others on this list. However, the horror anthology Slasher has amassed a loyal following during its three seasons, and with the fourth season, Slasher: Flesh & Blood, on the way and the Comic-Con panel revealing more info, the fanbase caused the Slasher wiki to jump 47%.

That’s all the more impressive considering Slasher has jumped from one streaming service to another during its run – with its first season debuting on Chiller, its second and third on Netflix, and now Flesh & Blood set for Shudder. With the anthology scenario meaning new characters will be featured in Season 4, fans were looking back at previous events for the most part, with the four most popular pages during Comic-Con consisting of Season 2 (Guilty Party), Season 1 villain and namesake The Executioner, Season 3’s The Druid, and Season 3 (Solstice).

Jumping 40% in traffic thanks to its Comic-Con presentation and trailer debut was the world’s most infamous doll, Chucky. With the Comic-Con presentation noting the new Syfy/USA Chucky TV series would include characters from across the entire Child’s Play franchise, going back to the 1988 film and several of its sequels, while also delving further into Chuck’s backstory, there was a lot for fans to dive into on the pages for those folks, to refresh themselves on the 33 years of continuity so far.

The most popular page was for Chucky himself, while his sometime lover/sometime enemy, Tiffany Valentine, was the second most visited page. A bit of a mystery still is the location of Chucky and Tiffany’s children from Seed of Chucky, and Glen‘s page was the third most popular following the panel (with Glen’s female counterpart, Glenda, also in the top ten). Glimpses at new childhood scenes in the TV series for Charles Lee Ray no doubt contributed to Chucky’s original human identity coming in as the fourth most visited page after the panel. You indeed can’t keep a Good Guy down.