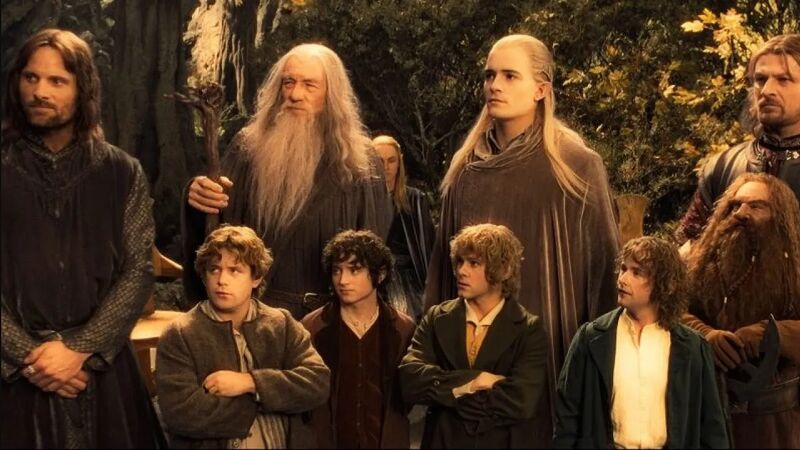 Feasting with the Fellowship

This year marks the 20th anniversary of the theatrical release of The Lord of the Rings: The Fellowship of the Ring (feel free to freak out). As we reflect on J.R.R. Tolkien’s continuing legacy and the impact of these books and movies, we can see how much their presence is still felt in our everyday lives. From memes to 4k rereleases to a new TV series to a cast reunion video with over 6.6 million views, it’s clear that fans haven’t had their fill. And speaking of getting full, the holidays are upon us. Let’s imagine we’re having the Fellowship over for our Thanksgiving meal, and they all are each preparing a dish. What do they bring, and why? Let’s dig in.

Bready, herby, often incorporated with some sausage and various veggies. I have just described both Hobbits and stuffing. Any Hobbit is going to take their food assignment seriously, and Frodo will give this underrated dish the respect it deserves and our table will be better because of it. He’s thoughtful, respectful, smart and clever, and you won’t believe him when he tells you that he put standard ingredients in the stuffing, because it’s flavor will be anything but standard.

Listen. I get it. We all get it. Everyone knows about it, so we shouldn’t need to say it, but for those who may not: PO-TAY-TOES. Yes, even if it were just up to the meme, this would be the obvious assignment and the lowest hanging fruit. But consider the reason for the iconic line in the first place. Samwise talks about potatoes that way not just because he loves them—he’s also mastered them. The Gamgees are famous for their rooted vegetables in general, but potatoes stand above the rest. While he may be simple, Sam knows what he knows, and he knows potatoes. These will be a contender for the favorite dish.

As the older and more responsible half of the fun-loving, troublemaking duo of Merry and Pippin, Merry gets the pumpkin pie. On the one hand, he’s probably got a strong sweet tooth so he’ll hold himself to a high standard, and on the other hand, as an expert raider of Farmer Maggot’s crops he’ll know where the best pumpkins are kept and under which conditions the best ones are grown. Also, pies can be finicky, so this is best left in the hands of someone who won’t crack under pressure.

While Pippin shares a sweet tooth with Merry, he lacks Merry’s maturity and poise. Because of this, Pippin is going to take care of the yams. It’s not that he’s not capable, it’s just that sometimes he gets in his own way. Yams are hardy, tough to mess up, and since Pippin’s also familiar with Maggot’s crops he’ll be able to secure the best of the best. You also know that he’ll be heavy-handed with the marshmallows and brown sugar, greatly obscuring the line between side and dessert.

Who else could we trust with the main dish? None other than King Elessar himself. Under his roguish exterior, Aragorn carries a lifetime of culinary expertise. He’s lived in Rivendell, Lothlorien, Gondor, Rohan, and all of the wilds in between, so he’s picked up a few tricks. As the greatest hunter of his era, he knows where the largest and most delectable turkeys dwell. He’ll harvest it cleanly and humanely, then use his combined knowledge from the kingdoms of men and elves to make a dish that is nigh unto perfection. This will stand against Sam’s potatoes for the favorite.

Bless his heart, but Boromir probably isn’t interested in making the best dish or having an amazing gastronomic experience. We’re going to give him something simple because he can’t be bothered to spend more than 20 minutes on prep. To him, food is fuel, especially on Thanksgiving. The Fellowship is playing a football game afterward, and Boromir is convinced that he only needs himself as quarterback and Gimli as running back to beat the rest of the group, and he’s probably right. Don’t be surprised if he just plunks down a can of Ocean Spray jellied cranberry sauce then runs out back to play catch with Merry and Pippin.

If anyone in the Fellowship is going to know their way around some leafy greens, it’s Legolas Greenleaf, Prince of the Woodland Realm. In fact, Legolas will likely end up bringing three different salads, each made of ingredients that he sang to every day during their planting and growing season and which willingly harvested themselves at his request. He will have made each dressing and vinaigrette from scratch, and will impress everyone when he reveals that the wine he brought to pair them with is 2000 years old.

For this dwarf, only one meat at a feast of celebration would have meant tragedy. He’ll prepare a ham larger than Pippin that he smoked for 48 hours over the bellows he built specifically for this dish. Every element will be calculated and precise, with five different thermometers placed strategically to ensure an even heat. He’ll collect the smoking wood from a specific grove that’s a four-day hike away, and the glaze will be measured down to the milligram. Gimli’s ham is our third contender for favorite.

More than anyone else in the Fellowship, Gandalf knows that simple things can have a large impact. It doesn’t get more simple than bread. He’s had centuries to refine his process, and like his fireworks, Gandalf’s rolls will have gotten better with age. He already specializes in fire and flamecraft, so we know that they won’t ever be overcooked. Nor will they be undercooked. They’ll come out of the oven precisely as he means them to, and if he happens to mutter some incantation over the yeast or flour as he makes them, we’ll just count ourselves lucky. Next to Aragorn’s and Gimli’s meat and Sam’s potatoes, these will earn a place in the “favorite” conversation.

That’s part of what you could expect from Thanksgiving with the Fellowship. You could also expect the day to be full of song, mirth, games and stories. Sam would be embarrassed to be included in the favorite dish conversation, and Merry and Pippin would be indignant at their exclusion. When the time came to go around the table to express gratitude, Gimli’s answer would be straightforward, Boromir’s answer would be honest and heartfelt, and Gandalf would say one vague thing that possibly hinted at a different, even more vague thing.