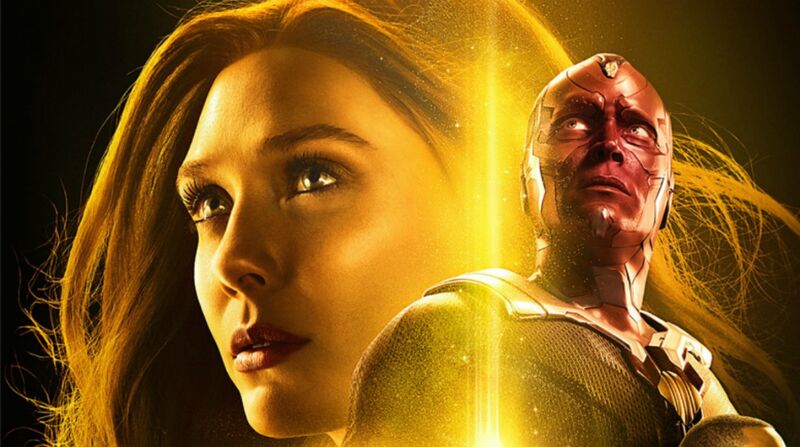 Stop us if you’ve heard this one: a super intelligent robot falls in love with a witch. A witch who can fly, who can manipulate energy forces, and who got her powers from an Infinity Stone — the same Infinity Stone that is giving said robot life and sentience. No, you haven’t heard that one? Then let us take you on the comic book love story of Scarlet Witch and Vision.

Scarlet Witch and Vision’s Romantic History in the Comics

Scarlet Witch AKA Wanda Maximoff was introduced in X-Men #4 in March of 1964. For many years, Wanda and twin brother, Quicksilver, had no idea that their father was the leader of the Mutant Brotherhood, Magneto.  The pair eventally left the Brotherhood and joined the Avengers, similar to how their MCU counterparts did in Avengers: Age of Ultron.

The Death of Their Children

Wanda and Vision fell in love and got married, believing that their love was born out of their individual free will. They discovered in Avengers Forever Vol. 1 #10 that they were actually brought together to prevent Wanda from having children by the villain Immortus. Immortus believed that if she married a robot, this would prevent her children from shaking the foundations of reality.

Wanda did conceive children however, twins, Tommy and Billy. Unfortunately they were created from energy from the dark realm of Mephisto. Mephisto then reabsorbed their energy and the twins ceased to exist. At first Wanda’s memory of her children were repressed but once reminded of them, her powers began to spin out of control.

At one point during Excalibur Vol. 3 #12, Doctor Strange had to use the Eye of Agamotto on her to put her into a catatonic state so she couldn’t use her powers. She broke out of this and changed all of time and space in the comic book storyline House of M.

As for Avengers: Infinity War, Wanda and Vision’s love story has been a little different. As of Captain America: Civil War, the pair have gotten close, but they weren’t romantically involved yet. According to a recent interview with Elizabeth Olsen and Paul Bettany (see above), Wanda and Vision have been meeting in secret since Civil War. Their relationship will be a focal point of the film, especially since Vision is powered by one of the Infinity Stones that Thanos is after. Will their love survive what’s ahead for the MCU?