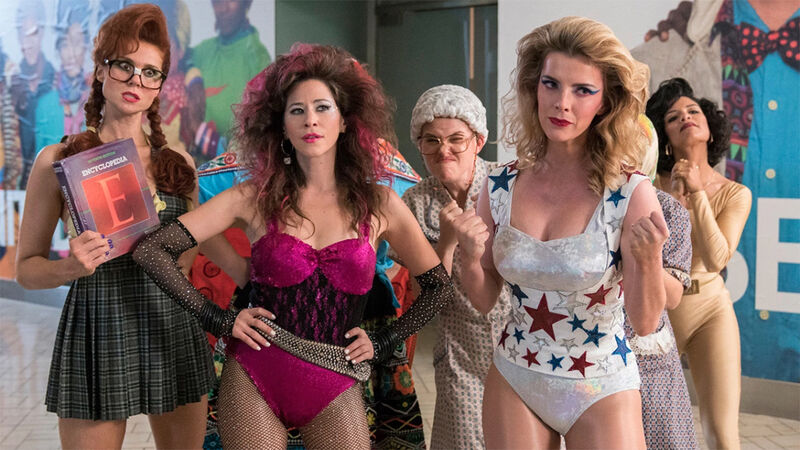 Season 2 of ‘GLOW’ Clotheslines the Competition This Summer

If you live in a hot place, summer is a time to be outdoors soaking up in the sun. And if you don’t, it’s a time to be sitting in a cinema checking out superhero movies. Or alternatively watching the World Cup. But this year there’s an alternative — as June 29 GLOW returns.

The wrestling comedy — which stars Alison Brie and Marc Maron — launched on Netflix last June, and was an immediate smash-hit. We’ve already watched Season 2, and if anything, it’s even better. For the following reasons…

With Cherry off shooting her cop show, Episode 1 of Season 2 introduces a new wrestler in the shape of Yolanda. Or Yo-Yo for short. She wins the job while giving Sam a lapdance. The ‘Gorgeous Ladies of Wrestling’ don’t exactly welcome her with open arms, and turn nasty when she adopts Cherry‘s ‘Junkchain’ persona. However, she wins them over via some killer dance moves, with Yolanda poppin’, lockin’ and breakin’ in the ring. She’s GLOW‘s first openly gay wrestler, has bags of attitude, and is a welcome addition to the crew.

Season 2 takes wrestling to the next level, the ladies performing (and stealing) some seriously impressive manoeuvres. The aforementioned Yo-Yo fights Cherry in the Battle of the Junkchains. Liberty Belle tussles with Welfare Queen in a surprisingly emotional fight. Science takes on Magic in a hilarious match-up. There’s a genuinely brutal brawl that ends with a serious injury. And an almighty ‘Battle Royale’ that brings the series to a close.

Love is in the Air

The ladies are becoming more popular, receiving visits and fan mail from their (handful) of adoring fans. And that’s not the only love happening in new GLOW. We won’t say who gets together to keep this spoiler-free, but sexual tension continues to underpin Ruth and Sam’s relationship, while there’s even a wedding this season. Though you’ll never guess who it involves.

Everyone knows that 1980s music is amazing, and GLOW makes the most of the sounds of the era. Season 2’s soundtrack includes “It’s Like That” by Run DMC, “Smalltown Boy” by Bronski Beat, “You Make My Dreams” by Hall and Oates, “Don’t You Want Me” by The Human League, “Kayleigh” by Marillion and “Nothing’s Gonna Stop Us Now” by Starship. There’s an awesome training montage to powerful Frank Stallone anthem  “Far From Over.” The girls also record a couple of songs of their own, a Madonna-esque pop number, and a charity song that has to be seen/heard to be believed.

There’s more drama out of the ring than in it this season. The show is threatened with cancellation which causes Sam serious stress. Ruth and Debbie’s love-hate relationship gets ever-more complicated. Tamme’s life away from wrestling is explored in an emotional episode. Drugs are taken. Harassment occurs. Deportation is threatened. Sexism and racism hit the girls hard. Bash goes on a pretty dark journey. And the show continues to examine how many of the ladies struggle to have both a career and a family.

It isn’t all serious however, with Season 2 of GLOW even funnier than Season 1. That’s largely down to the brilliant scripts and hilarious performances. But also because of the promos, sketches, adverts, PSAs and music videos that are peppered throughout the series. Indeed the highlight is a 30-minute episode of the real G.L.O.W. show, replete with a very ’80s title sequence, a slasher spoof, ‘Griefercise’ with Liberty Belle, a bestiality skit, and the introduction of ‘Glowbot’ and Zoya’s identical twin Olga. Making it the funnest episode of the funniest show hitting screens this summer.

GLOW returns to Netflix on June 29.