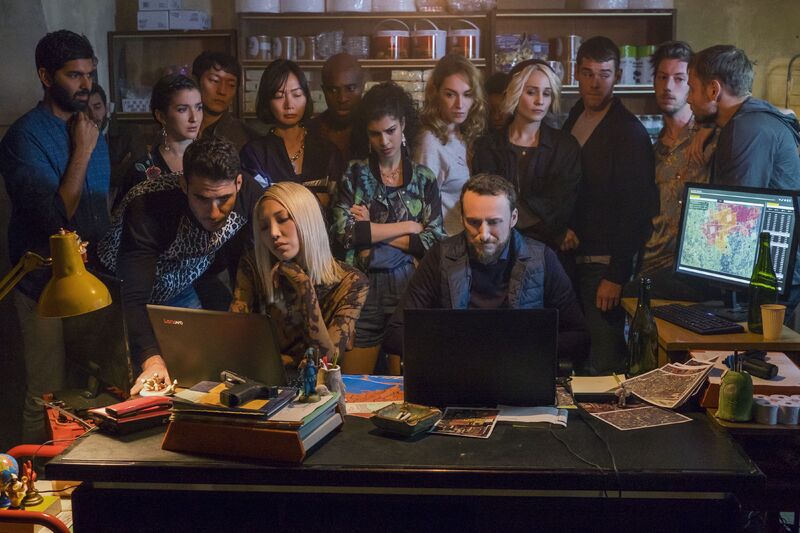 Why Sense8 is a Perfect Show for the Isolation Era

As the world continues its seemingly interminable state of lockdown, streaming services and Blu-rays have become sanity preservers, providing entertainment to keep the housebound occupied. While our isolation provides the perfect chance to marathon-watch the likes of Game of Thrones or Westworld, there’s one show that’s fittingly designed to remind us of our connections to the wider world – Netflix’s late, lamented, and historically ambitious sci-fi series, Sense8. If you’ve never watched it, now is the ideal time to get your binge on.

The series centres on a group of eight disparate individuals, played by a multinational cast – Icelandic DJ, Riley; Kenyan matutu driver, Capheus; Korean kickboxer, Sun; Indian chemist, Kala; Mexican actor, Lito; German thief, Wolfgang; and Americans, Will, a police officer, and Nomi, a white-hat hacker – who are awakened to a psychic link between them. This allows them to step into each others’ lives and share skills or knowledge from afar.

It’s the brainchild of the Wachowskis, creators of the influential and ahead-of-its-time, The Matrix, and J. Michael Straczynski, creator and (near-singlehanded) writer of the equally noteworthy space opera series, Babylon 5. Without their involvement, Sense8 could have easily turned into a typical genre show, with case-of-the-week dramas and a barely evolving status quo. Instead, it’s an ode to humanity itself.

This is immediately apparent from the opening credits sequence, which eschews any focus on the central cast, bar their names, setting out the scale of its ambitions from the get-go and signalling its prescience. Instead of training the lens on individuals, the filmmakers assemble footage taken from the show’s entirely on-location shoots, and treat us to a global travelogue – slices of cultures, cities, landmarks, and people from around the world; a clip-show of lives lived, our worldwide connectivity, and the thriving hearts of communities.

The credits alone are a lesson that whether you’re living in London or Nairobi, Seoul or Mumbai, people are, by and large, driven by the same needs and desires. There’s a sameness that should connect us. Prior to this international crisis, escalating division threatened peace, and intolerance seemed to be growing. Who knows yet what will happen once the crisis has passed, but many people are taking the opportunity to reassess and really look at what’s been going on in the world. “Kindness is sexy,” reads a homemade cardboard sign glimpsed towards the end of the opening titles.

Watching the show in the current global climate, the credits alone are a glorious refresher of what bustling cities look and feel like (how easy we forget in our socially distant ‘new normal’), and the beauty of what it’s like to really live alongside one another. And then there’s also the beguiling, and often overlooked, interweaving of people with nature that underlines the importance of our relationship with the planet itself, reminding us of our place in it, and our responsibility for it.

The globetrotting cinematography is a treat for our travel-starved eyes, and powerfully presents a concise, resonant way of reconnecting to the world we miss, encouraging us with a newfound enthusiasm to look at people and places with fresh eyes. But it’s the writing and themes of Sense8 that make the series essential lockdown viewing.

The evolution of the characters – known as ‘sensates’ for their abilities, and their telepathic link, termed a ‘cluster’ – as they awaken to their powers, finding strangers from a world away in their thoughts, or themselves telepathically teleported to unfamiliar locations, mirrors the fears and insecurities many people may experience in real life when encountering people from different cultures. But as the link between the group develops, each sensate realises their humanity is a shared constant that helps them to feel, almost, one. They begin to help one another.

Theirs is a symbiotic relationship but it’s also a metaphor for the way we should also behave. The common experience of being human should be enough to foster empathy in the majority of us and compel us to act altruistically. As these slowed-down, uncertain times compel us to stop and think of others while the world shines a spotlight on the helpers (the key workers, healthcare professionals, the volunteers) and those in desperate need (the vulnerable, the dying, the families losing loved ones daily), behaviour and priorities are undergoing a shift. Sense8 knows the importance of love and compassion — and now the rest of us are starting to wake up.

Straczynski explored the power of connection and understanding in his comic book series, Rising Stars, but these are brought front and centre in Sense8. Whether gay or straight, trans or cisgender, whatever their ethnicity, whatever their class, the sensates realise they are one and the same, that connection and empathy is integral to the human experience. Whatever our backgrounds, we all have the same emotions and the same human needs – we hunger for love, understanding, security, compassion, sex, and Sense8 unflinchingly acknowledges these similarities and asks us to, too.

As our isolation in these unprecedented times continues and many of us begin to reevaluate, Sense8 reaffirms the importance of such lessons. To watch Sense8 in the current climate is to amplify its messages tenfold. As we acknowledge that we are lucky to be able to stream television at this time, we remember also that it is a privilege that many around the world won’t be afforded. Sense8 proves a strangely powerful reminder of the injustice of inequality, at a point in history where everyone is experiencing the same crisis but won’t necessarily be able to ride it out in the same comfort.

Beyond its window into the thriving world we’re all currently cut off from, and its potent reminder that we have more in common than separates us, Sense8 remains worthy of a lockdown watch – or rewatch – because it still stands as one of the best shows Netflix has ever commissioned. It’s densely plotted, with any one of the core eight characters having enough going on to anchor their own show.

Sun’s personal tale is a revenge thriller that could stand shoulder to shoulder with the edgiest of Korean cinema – fitting, given actor Bae Doona had previously appeared in Park Chan-wook’s Sympathy for Mr Vengeance – while Lito’s arc of being a closeted action star is prime telenovela fuel. Wolfgang’s story would fit alongside the grittiest of European crime films, while Will’s urge to crack an unsolved murder is a staple of cop movies. Yet here, we have all those arcs and more, woven together with a strand of high-concept sci-fi that delves into the very origins and evolution of the human race.

Sadly, Sense8 never quite found the audience it deserved when it originally dropped on Netflix. While the first season drew warranted acclaim upon its premiere in June 2015, long gaps between seasons – it took until Christmas 2016 to release the feature-length special Happy F*cking New Year, another five months for Season 2 proper – coupled with Netflix’s model of launching whole seasons in one go, saw viewers dwindle to levels that did not justify the cost of production. While those gaps were necessitated by the show’s intensive location shooting and arduous editing, the series was cancelled by Netflix after its second season, although passionate fans rallied to secure another movie-length special as a finale, titled Amor Vincit Omnia – appropriately, “love conquers everything”.

Ironically, the very same factors that make Sense8 such a perfect show for the lockdown era would also make it impossible to produce currently, even if Netflix hadn’t cancelled it. When even smaller-scale series, such as the CW’s Arrowverse quintet, have stalled production due to the COVID-19 crisis, a show predicated on its global shoots, international casts, and use of real-world locations rather than closed sets would have no chance of being filmed right now.

Sense8 remains Netflix’s cruellest cancellation, robbing the world of a much-needed, continuing expression of universal humanity. But at least we have the entire show to revisit at a time when it couldn’t be more relevant or powerful. When we re-emerge from our shared isolation, we’d all do well to take on board Sense8’s lessons of empathy and the importance of connection as we face what’s next, together.

You can stream Sense8 on Netflix.