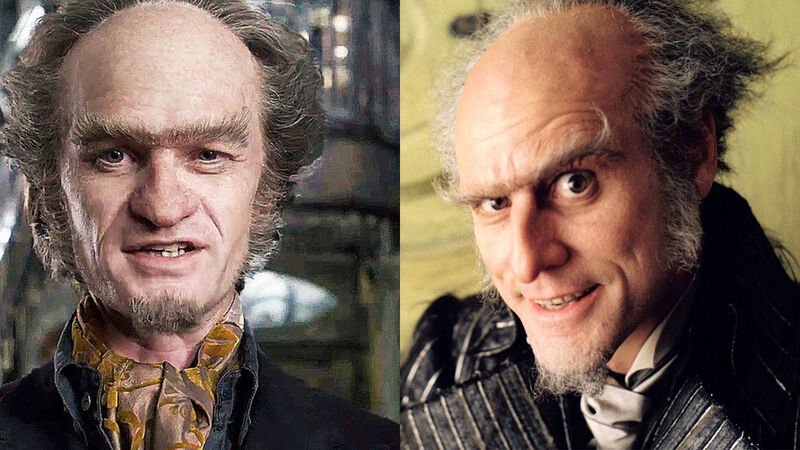 ‘A Series of Unfortunate Events’: Who Makes the Better Count Olaf?

Season 2 of A Series of Unfortunate Events is upon us – and Neil Patrick Harris returns as the odious Count Olaf. But before the Netflix series began transferring the Daniel Handler novels to the screen, there was the 2004 movie starring Jim Carrey. Which begs the question: who makes the best Olaf?

Does Jim Carrey It Off?

Jim Carrey is an actor born to play a character like Count Olaf. He’s known for his rubber face and high-energy, slapstick performances. His back catalogue of screen roles includes Ace Ventura, Dumb and Dumber’s Lloyd Christmas and The Mask. All of which exploit his very unique talents.

A larger-than-life creation, Olaf is a villain, albeit a very fallible one. The books, although dark, come with a sense of humour that renders Olaf as comical as he is heinous. The story sees the money-grubbing ‘actor’ adopting a series of disguises designed to fool the authorities so he can get his hands on the Baudelaire orphans and, ultimately, their huge inheritance.

In the role of Olaf, Jim Carrey is menacing. He brings his trademark zaniness to the role, but there’s a dark side to the actor that comes through in his portrayal of Olaf. It’s a similar characteristic that you can see in his screen version of Dr Seuss creation, the Grinch. Carrey’s Olaf feels like a real threat, which brings a hefty dose of dramatic tension to the film. Carrey’s performance effectively balances dark humour with palpable peril making Brad Silberling’s version of ASOUE more than simply a comedy. There’s a dash of horror in it, as well as elements of thriller. The film adapts the first three books and ends with the onstage wedding between Olaf and Violet – which genuinely feels quite frightening and tense.

Ultimately, though, Carrey is always Jim Carrey. While he’s indisputably well cast for a role like this, he never lets us forget that we’re watching Jim Carrey.

Neil Patrick Harris For the Win

The Olaf-Violet wedding occurs during the opening episodes of Barry Sonnenfeld’s Netflix series and has a different, less sinister tone than the film version. It feels more farcical, which mirrors the general approach to the series, and Neil Patrick Harris’s portrayal.

Neil Patrick Harris’s back catalogue includes teen-genius doctor Doogie Howser, MD and Barney from How I Met Your Mother. He isn’t as narrowly defined as Carrey when it comes to comedy, with Harris coming to the role less as a screen persona, more as a talented comedy actor. Which means we’re better able to separate the actor from the role, instead of blending both together.

Harris brings his comedy chops and inherent likeability to Olaf, heightening the absurdity of the story rather than drawing out the menace. He’s extremely watchable — and gets to adopt more disguises than Carrey since the entire series of books is adapted.

Harris’s costumes are more imaginative, bringing more for the eye to feast on, and the different personas he adopts are funnier and more entertaining. To the point where you’re eager to see the next one, and Harris’s transformation into each new persona. He takes on a series of different accents and personality traits, from the eyepatch-wearing, Irish-accented fisherman Captain Sham in Season 1 to interior designer Gunther’s supercilious Karl Lagerfeld-alike from an undetermined European country in Season 2. Each guise is always peppered with a healthy sprinkling of Olaf, of course. The point being it’s very obviously Olaf, even if the majority of the adult characters in the story can’t tell.

Harris also showcases his musical talents in the role – we see him singing and dancing as he performs musical numbers integrated into the series. Which brings an extra, fun dimension that’s missing in both film and book.

Ultimately, three seasons of A Series of Unfortunate Events have been greenlit, allowing Barry Sonnenfeld to complete adaptations of all 13 books with NPH in the role. In the case of a possible film franchise starring Carrey, it never got further than the first film, which adapted the first three books. That speaks volumes about which Olaf audiences prefer.

Neil Patrick Harris is clearly having a ball, and is a joy to watch — which makes him our pick for best Olaf. NPH FTW.

A Series of Unfortunate Events Season 2 is available on Netflix from March 30.