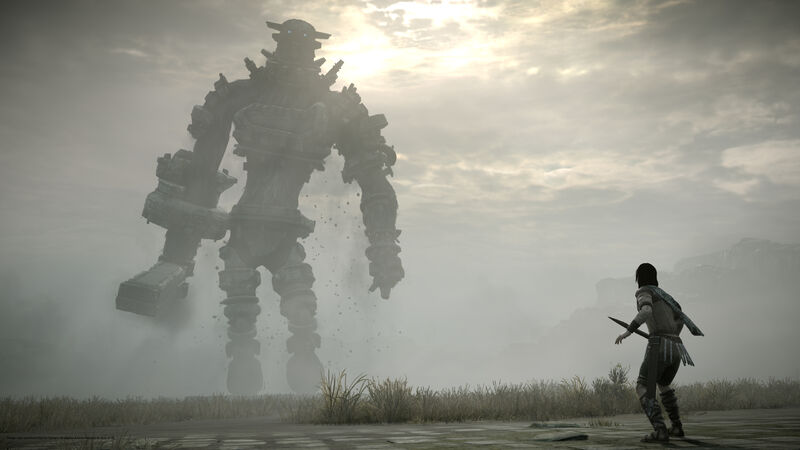 ‘Shadow of the Colossus’ Review: Becoming the Monster

The moral quandary that lies at the heart of Shadow of the Colossus’s story takes no time to announce itself, with distinct discomfort. When you spy the first of the game’s 16 titans, a minotaur-like behemoth, you’re in absolute awe of its scale. Surely it’s impossible for this child, with a sword like a knitting needle, to conquer such a magnificent creature. Know what you’re doing, though, and the giant will be dead inside three minutes.

It, like every colossus here, is a puzzle that can be solved swiftly if you’ve got the necessary experience.

Collapsed, defeated, it breathes its last as the music swells not into a victorious fanfare, but something more melancholic. And as black tendrils emerge from its body and attack your triumphant hero, knocking him to the dirt, so the question strikes just as true as any sword into an illuminated weak point: what if I’m the bad guy here?

It’s a question answered by the game’s ending – but the whole journey through, you’ll pause before delivering each deathblow. From turtle-like monsters hiding out amid geysers to serpentine dragons that burrow beneath desert sands, these “bosses” rarely attack unless provoked. As you ravage the Forbidden Lands’ roster of fantastic beasts, there’s never cause for celebration, progress only ever achieved with unease as to what comes next.

And so, come the credits, our hero has become something else, his path of destruction his own undoing. He engenders little sympathy. This is no significant spoiler: Shadow of the Colossus is well over a decade old now, and this ground-up remake of Team Ico’s 2005 masterpiece for the PlayStation 2 retains the geographic, mechanical and narrative motifs of the original game, transformative (and Ico-cueing) ending included. Its legend is widely documented, digested and recycled, to the point where its reputation precedes it.

Many a player in 2018 will know all about this game’s linear and compact story, and its protagonist’s blinkered selfishness, whether or not they’ve ever raised a controller in its company. To see it return for a third time, however – following an HD remaster in 2011 for PS3 – is to feel familiar emotions stir with fresh impetus, reawakened by a wonderfully measured and respectful remake.

What once pushed the PS2 into late-lifecycle tricks to achieve the vision of its director, the feted Fumito Ueda (who also helmed 2001’s Ico and 2016’s The Last Guardian), can now breathe easily on hardware eminently capable of rendering its undulating landscapes of swaying grasses and sheer rock faces, sunbeam-splintered clouds and, of course, its singularly realised megafauna.

Bluepoint Games – who worked on the PS3 remaster, and more recently the PS4 port of Gravity Rush – have built upwards from the PS2 code. While everything looks far prettier, crucially, this remake has retained the essence of the original. Everything aspect of your journey from the paths from a central, hunt-commencing temple to the mammoth quarry in question,  are as you recall them from grainier, blurrier times.

Health-restoring shrines are where you left them the last time you visited these lands, lizards slinking in and out of their age-cracked facades. Agro, your horse, is the same twitchy, unreliable companion, at times as easy to steer as a warship through a mazy canal of custard, but you wouldn’t dream of changing him for an Epona or Roach.

(This is also a story of a boy and his horse, which hits its crescendo before the game’s denouement.) Impassable mountains still tower with ominous, world-edging dominion, and every colossus lurches as they did the first time you guided an arrow into a fleshy underfoot or exposed knee joint.

Concerns that crisp, contemporary visuals would strip this world of its atmosphere-supplementing barrenness prove unfounded. Shadow of the Colossus remains a game of magical otherness, of genuinely refreshing loneliness, a true single-player masterclass in a time of often-misguided ‘games as a service’ market ambitions. Its environments may be painted in deeper greens and richer yellows now, but that places the game in line with one’s memories of it, rather than beyond them and into a kind of aesthetic dissonance.

Structurally, much about Shadow of the Colossus remains curiously PS2-like. Its open world is smaller than today’s equivalents, with Agro capable of racing from its central point to any extremity in a handful of minutes. Its moment-to-moment play, too, is illustrative both of Ueda’s design by subtraction philosophy – don’t include distractions when they add nothing of note – and the restrictions of what could be added as additional content, at the time. A few pieces of fruit to eat, some lizards to catch, that’s about it, ostensibly – secret spaces do exist, but you’re never signposted to them.

Shadow of the Colossus was born as a very curated adventure, with specific beats presented in a very deliberate order. To make the same game from scratch today, no doubt, would be to negotiate countless meetings about side-quest pursuits, collectibles with debatable significance, and the spectre of DLC. How we’ve grown as an industry, one step forwards but a few more blindly sideways.

Playing through this remake is reminiscent of when the PS4’s Ratchet & Clank came out. That 2016 reimagining of the original game, another PS2-era title, brought memories, rose-coloured as they so often are, and naturally liable to papering over cracks, into reality. This wasn’t the Ratchet & Clank you actually played, but instead, the warm remembrance of a time captured anew, in delicious high-definition.

Shadow of the Colossus is that sensation, again. In the mind’s eye, this was always the Forbidden Lands. The textures were never so sharp on screen, but our imaginations refocused them, likewise the luscious fur and rugged protrusions of the climbable colossi. We had the artwork, and that’s what we mentally overlaid atop the game models. Now, all of that detail, that life, has been lifted from print and brought to life on screen, and it’s just the greatest rush to see the highs of the past moving and shaking, fighting and falling like they did in our dreams all those years ago.

Is Shadow Of The Colossus Any Good?

2018’s Shadow of the Colossus inevitably carries over some divisive elements of past incarnations. Both horse and boy can be a handful to accurately direct, at times, and the climbing controls are an acquired taste, fiddly by Uncharted and Breath of the Wild standards. A couple of the colossi feel less indigenous than others too, trading scale for aggression in a way that keeps you on your toes but never feels as impressive as encounters with the more spectacularly proportioned amalgams of biology and architecture.

A modest concession to modernity is made with the inclusion of a robust photo mode, complete with a range of filters. Of course, the tech under the hood is also of the here and now, with a new lighting engine doing wonders for the Forbidden Lands’ long shadows and two different performance modes available, locking at 30 and 60fps respectively, on the PS4 Pro.

This is the Shadow of the Colossus that you thought you played over a decade ago, unfolding before your eyes. Every second as sad, as spectacular, and as exceptionally unique as it ever was. And worthy, indeed, of creating more memories with.