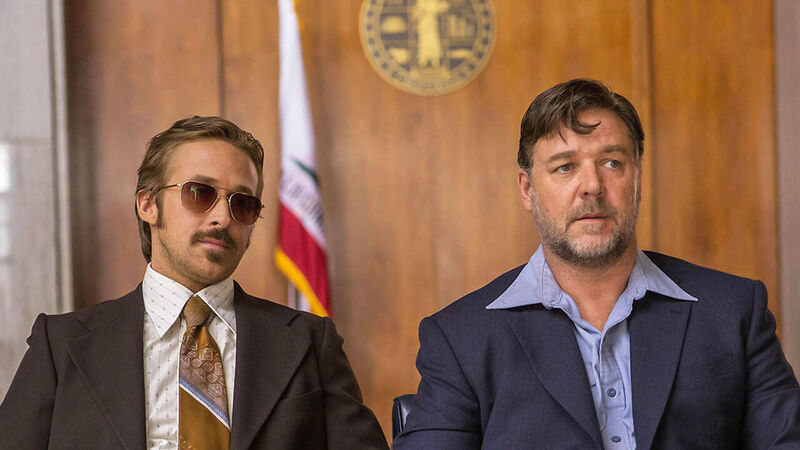 This Friday, May 20, The Nice Guys will be released into US cinemas, giving Shane Black fans another dose of what they’ve been craving. Black has a distinct cinematic voice, a mastery of the quippy tough guy archetype and a razor sharp sense of sardonic humor. His films have gone on to become action classics, including Iron Man 3, which he wrote and directed. But there’s more to his filmography than just a great Marvel movie, so read on to find out which of Black’s films are essential viewing. First, this delightful trailer:

A true classic of machismo cinema, Predator is one of the few of movies where Shane Black was mostly in front of the camera. Black plays Hawkins, a member of the elite special forces team that accompanies Dutch (Schwarzenegger) into the heat and humidity of the jungles of Central America. Hawkins is the team’s radio operator, a jokester with comically large glasses who had the displeasure of being the first cast member to die at the hands of the Predator. Though his role in the film is minor, Predator is an essential entry in Black’s filmography. Not only because he did uncredited work on the script, but because he’s coming back to the franchise in a big way — by directing the next sequel. This new film, titled The Predator, is set to be released on March 2, 2018. Fred Dekker (who directed The Monster Squad, written by Black) will write the screenplay.

There’s no denying it — Lethal Weapon is one of the most iconic buddy cop movies of the latter 20th century. It’s just nowhere near as fun as everyone seems to remember. Written by Shane Black and directed by Richard Donner (Superman, The Goonies), this surprisingly dark and testosterone-soaked flick gives us Mel Gibson in one of his most unhinged roles. Gibson plays Riggs, a special forces veteran who ended up working the narcotics beat at the L.A.P.D. On the verge of suicide, Riggs is acting out. After an outburst on the job, he’s transferred to homicide and partnered with Roger Murtaugh (a very grumpy Danny Glover). The conflict between the two men isn’t played for as many laughs as it is in the sequels. This is a film where they hate each other’s guts. So it’s got more than its fair share of darkness, but it’s still a clever and funny action classic that deserves its place in the pantheon. Oh, and like Iron Man 3, it takes place during the Christmas season.

Despite its use of the downright stupid “oh, I bumped my head and now I remember stuff” canard, this is a darn fun movie. Geena Davis plays Samantha, a small town schoolteacher who can’t seem to remember anything before she washed up on a beach in New Jersey eight years prior. Samantha gets a bump on the noggin, and shortly after realizes that she’s got superhuman fighting skills. Samuel Jackson, in top monologuing form, plays a private investigator hired to find details of Samantha’s past. The two get tangled in a spy plot, and explosive hijinks ensue. It’s not a particularly smart or subtle movie, but Shane Black’s dialogue is great, and Geena Davis will make you believe she can kick some serious ass. It’s directed by Renny Harlin (Die Hard 2, Deep Blue Sea), so the action is masterfully staged and executed. Harlin was a master of 90’s action movie explosions — the kind that make you miss practical effects. Oh, and like Lethal Weapon, it takes place during the Christmas season.

This wickedly funny LA detective caper stars Robert Downey Jr. at the height of his pre-Marvel renaissance. Quietly released in late 2005, this loose adaptation of a Brett Halliday novel begins when burglar Harry Lockhart (RDJ) accidentally stumbles into an acting audition after his accomplice has been shot by the police. When his emotional outburst lands him the role, Lockhart is paired up with private investigator Perry van Shrike (Val Kilmer) for research. As luck would have it, the two get rolled up into a murder mystery that reunites Harry with a childhood friend (Michelle Monaghan). This is a damn funny and energetic movie with killer dialogue, and a cavalier attitude toward the rules of cinema. If you see one Shane Black movie to prepare for The Nice Guys, make it this one. Oh, and like Iron Man 3, Lethal Weapon, and The Long Kiss Goodnight, it takes place during the Christmas season. Noticing a trend?