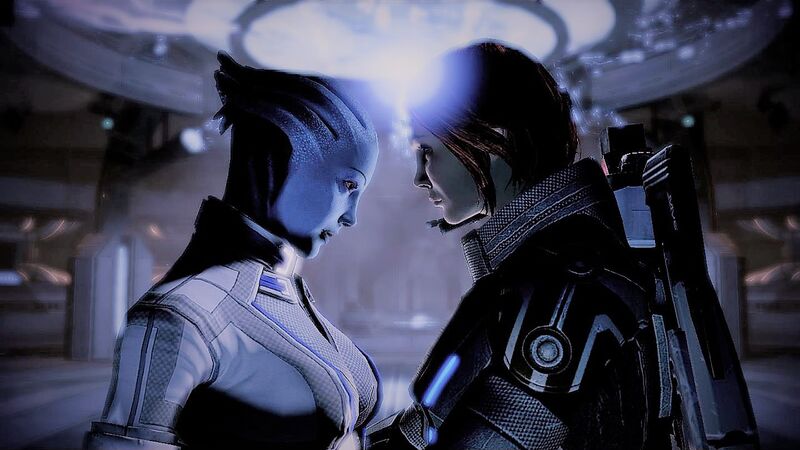 BioWare has been making games forever. And for just as long as they’ve been making games, they’ve been telling stories about people who fall in love. The studio’s pioneering style of long-form choice-and-consequence storytelling lends itself well to capturing the dynamics of interpersonal relationships. As a result, the characters in games from Baldur’s Gate to Mass Effect are memorable, relatable, and, very often, lovable. From five gamers who love games about love, here’s a list of five great lovers in BioWare games we love to love.

And if you don’t love spoilers… stop reading.

Bastila and You – Knights of the Old Republic

Okay, big ol’ spoiler warning here for Knights of the Old Republic. Seriously, this is gonna bum you out big time if you don’t know the big twist. You’ve been warned.

So, Bastila and the protagonist share a strong bond in the Force. If you so desire, you can pursue a romantic relationship with Bastila as the story progresses, but things take a turn when you discover that you are the powerful Darth Revan. You can either go down the path of the light and try and save Bastila from her trip down the Dark Side, or you can make her your apprentice as you become the ruler of the galaxy.

No matter what, the bond between Bastila and Revan is strong, and it’s endearing to see how much they’ll risk for one another. Maybe it doesn’t blossom into romantic love, but that’s up to you to decide.

Mass Effect took BioWare’s penchant for romance to a new level. What would happen if your romantic choices carried over to the next game, and then the one after that?

I have played through the Mass Effect series several times. The overall end point has been criticized and debated for a few years now, but it’s the smaller details that still resonate with me. One of those side stories that worked well with the continuous story/save transfers was Shepard’s relationship with Liara.

Liara T’Soni started out in the first game as an intelligent but somewhat naïve researcher who aids Shepard in his (or her) mission. From there she evolves over the course of the series, not just into a powerful ally in her own right but as one of the major influencers of the galaxy in her role as the Shadow Broker.

Your relationship through the games carries weight. From new, budding romance, to separation due to tragedy, to reconnection as allies and friends, and towards the end it can rekindle with a deeper connection. By the last game, if you’re still together, you look back and reminisce while (perhaps futilely) planning for your future together. It’s bittersweet to think of it as the player because we know what is coming, but it’s heartening that their relationship has given each other hope.

Dragon Age: Origins has its flaws, but character development isn’t one of them. It’s a game full of multifaceted, fun characters, many of whom you can romance. Alistair is a delightful surprise, and he is perhaps the game’s most dynamic character. If romance is a game option, I usually try to seduce everyone because hey – this is wish-fulfilment. In order to woo Alistair, however, the player had to stay faithful.

Alistair begins the Dragon Age series as an obnoxious do-gooder. But, his self-deprecating humor and desire to do the right thing are endearing. He’s surprisingly likable, and a great romantic lead. Some of the things he says are horribly cheesy but he’s so earnest that it’s cute. His wisecracks, commentary, and swoon-worthy appearance pushed me to multiple playthroughs. Playthroughs where I tried the other romantic plots felt hollow (except Morrigan‘s, but she’s pretty great too). BioWare gave life to this adorable boy-next-door type that’s basically Captain Ferelden with “the taint”. I never understood the concept of video game waifus until Alistair, but now I can definitely say: he’s my husbando.

I never expected to be praising the acting ability of Freddie Prinze Jr., but the former teen heartthrob has grown into a very skilled voice actor. Freddie’s skills are obvious in every scene featuring The Iron Bull in Dragon Age: Inquisition. He’s a fun bruiser that is a great addition to the team. And he gets even better if you strike up a relationship with him.

Bull’s love knows no bounds, so whether you play as a male or female Inquisitor, you can strike up a relationship with the one-eyed warrior. Things start fun and flirty, being more of a friends-with-benefits arrangement. It leads to some great bedroom scenes that are a great mix of funny and heartfelt.

And if you take your relationship more seriously in the game, Iron Bull has a surprisingly warm payoff, despite the more shallow way he first treats your relationship. It’s a really nice arc and one that both the developers and Prinze deal with well.

In a game that’s got Minsc and Boo, it’s hard to believe that there could possibly be a more memorable character, but there is one. Jaheira, a half-elf Harper, is with the player character from very nearly the beginning of Baldur’s Gate, along with her husband, Khalid. When he dies tragically at the hands of Jon Irenicus in the sequel, Jaheira is at first consumed by grief and a lust for revenge. Suddenly a relationship you thought you understood is in a place to be entirely re-written.

I stumbled into love with Jaheira, and as a fourteen-year-old boy, that surprised the heck out of me. I wasn’t interested in her, I was chasing Imoen, the obligatory damsel in distress (who, it turns out, is kinda your sister… awkward). By choosing to comfort and anchor Jaheira after her loss, and sharing her love of the beauty of nature (she is a Druid after all), I accidentally laid the foundation for a much deeper connection.

For an isometric RPG sprite, Jaheira offers powerful lessons about love. Simply by spending time with a person, you show that you care for them.  And if you support them in their goals, reflect the very best version of themselves, and share in their triumphs and sorrows, you open the door to something much greater than mere friendship. Jaheira demonstrates that love doesn’t necessarily happen only once your life, but each love is once-in-a-lifetime.