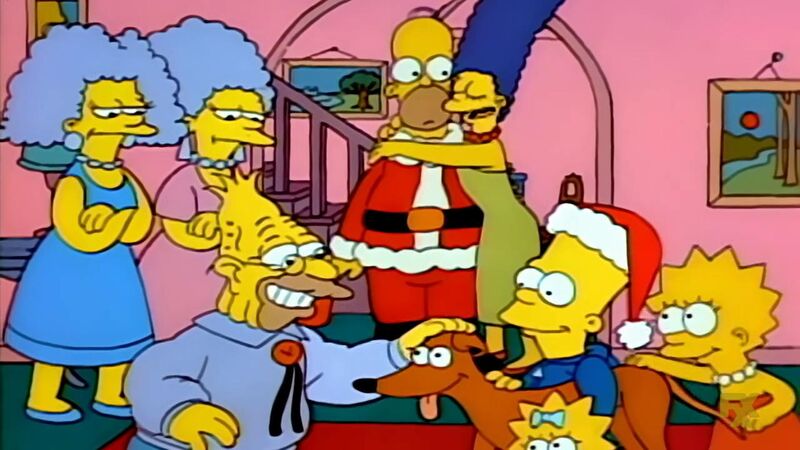 Exactly 30 years ago, on Sunday, December 17, 1989, The Simpsons Christmas special titled “Simpsons Roasting on an Open Fire” aired for the first time. And it’s not an overstatement to point out that the episode — which you can revisit now on Disney+ –changed television forever.

Today, critically-acclaimed cartoons are everywhere. And when something like Rick and Morty’s 2013 Christmas episode involves a giant, nude, dead homeless man wearing a Santa hat floating over North America, and Morty’s grandparents revealing their polyamorous relationship, no one bats an eye. At the tail end of the 1980s, however, a line like, “I’m Bart Simpson, who the hell are you?” could send shockwaves through the cultural mainstream. And sell a lot of t-shirts.

You might remember laughing until you cried while watching “Simpsons Roasting on an Open Fire,” and that the early episodes of The Simpsons were a little rougher than the meticulously crafted stories that were soon to come. Watching the special now, however, what stands out most about “Simpsons Roasting on an Open Fire” is not its relative (for the time) crudeness, but its complete lack of cynicism about the holiday season.

On the other hand, the plotline of “Will our family have enough money for Christmas presents?” is treated as a perfectly reasonable problem, not a symptom of the over-commercialization of the holiday or a turn away from its religious roots, in the manner of A Charlie Brown Christmas. Maybe compared to the TV landscape at the time, that idea seemed both honest and subversive, but it’s not so different than Clark Griswold’s obsession with giving his family a perfect, partly superficial, Christmas celebration in National Lampoon’s Christmas Vacation, which was released just two weeks before “Simpsons Roasting on an Open Fire” aired in 1989.

Even in these early scenes for The Simpsons, their unique take on the holiday still revolves around trying to keep other family members happy. Bart gets a tattoo of the word “mother” on his arm, but he doesn’t do it just to shock his parents. Bart envisions his mom fawning approvingly over the tattoo saying, “It’s the best present a mother could get, and it makes you look so dangerous.” When he’s caught by his mom midway through the tattooing (he only gets as far as “moth” before he’s dragged out of the tattoo studio), Bart objects, “But I thought you’d like it.”

Along the same lines, when Bart discovers that his dad has taken up a job as a mall Santa after Bart’s tattoo removal wipes out the family Christmas savings, he’s surprised but not ashamed. In fact, Bart sounds almost in awe of his dad when he says, “You must really love us to sink so low.”

Lisa doesn’t have much to do in this episode, but in her biggest moment she also defends her father. After Marge’s older sister Patty admits to trashing Homer in front of everyone because he’s late returning home for Christmas Eve, Lisa admonishes her aunt, saying, “Well, I wish you wouldn’t because, aside from the fact that he has the same frailties as all human beings, he’s the only father I have. Therefore, he is my model of manhood, and my estimation of him will govern the prospects of my adult relationships. So I hope you bear in mind that any knock at him is a knock at me, and I am far too young to defend myself against such onslaughts.”

Homer pleads for understanding from his son, even though it’s for the lost cause of betting his $13 mall Santa paycheck on the 99-to-1 odds that Santa’s Little Helper will win the dog race. While Homer says the dog’s name is an omen for good fortune, Bart notes — correctly — that it’s just a coincidence. “Come on, boy,” Homer says. “Sometimes your faith in me is all that keeps me going.” It’s a heart-breaking admission of vulnerability from a parent, especially in the Cosby Show heydey when even bumbling dads were still strong and decisive.

Bart also voices what is probably the most revolutionary idea that The Simpsons brought to television. When Homer decides to try to boost his meager paycheck at the dog track, Bart says, “If TV has taught me anything, it’s that miracles always happen to poor kids at Christmas.” Then when Santa’s Little Helper not only fails to come in first place, but trots across the finish line long after the rest of the heat, Bart says, “Doesn’t seem possible, but I guess TV has betrayed me.”

It was a revelation that still feels instructive in today’s pop culture landscape, which is that we shouldn’t necessarily count on movies or television to show us how to think or act or create our expectations of what reality is like. The Simpsons uses its first Christmas episode to make the case that television — even sentimental holiday programming — isn’t benevolent, and it shouldn’t have to be. It’s just entertainment.

At the same time, “Simpsons Roasting on an Open Fire” never expresses a wholly dark view of the holidays, and the episode ends on a positive note. Homer accepts Santa’s Little Helper when the dog leaps into his arms outside the racetrack. When that’s the only Christmas gift Homer brings home to his waiting family, Marge says, “This is the best gift of all: Something to share our love, and frighten prowlers.” Then the family sings “Rudolph the Red-Nosed Reindeer” with Bart’s schoolyard additions and Homer’s increased frustration. It’s sentimental, but not sappy.

Between Lisa’s erudite and blistering takedown of adult tut-tutting, and Bart’s meta commentary on the disappointing moral lessons of television, our first time with the Simpsons family feels like they’re reaching out to the audience. Their direct appeal explains (along with the fact that it was hilariously funny) why The Simpsons quickly became a sensation and why it remains popular on TV 30 years later. “Simpsons Roasting on a Roasting Fire” says to us, “Don’t judge our family, and we won’t judge yours.”