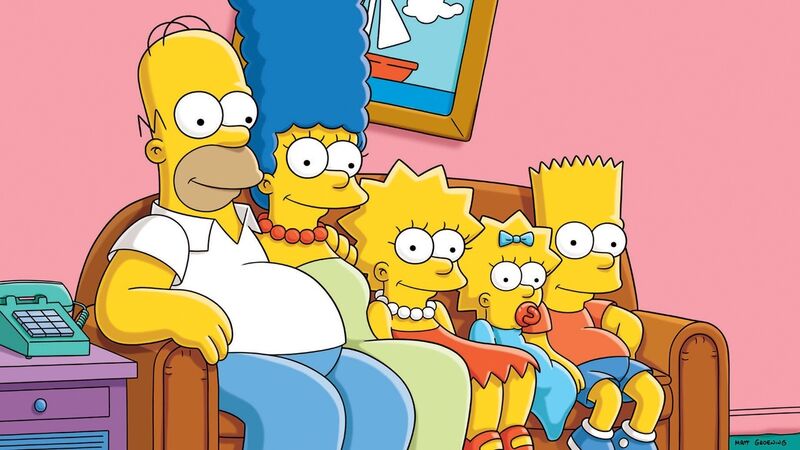 Times ‘The Simpsons’ Made Us LOL With Jokes About TV

With 2019 marking the 30th anniversary of FOX’s iconic animation series, The Simpsons (Watch Now on Disney+), it’s the perfect time to highlight one of the elements that’s helped make this show a staggering, groundbreaking success – the lampooning of TV itself.

Right out of the gate, it was clear The Simpsons was special. There was a super smart and savvy meta-aspect to the series that merged Homer’s love of TV with the fact that he himself was a part of a TV show, swirling the entire family’s life into a sort of satirical strew of televisual tip-of-the-hats.

TV’s “warm glowing warming glow,” as Homer once described it, has always been at the heart of this series, which itself is a light skewering of what we all recognize as a traditional sitcom family. Here’s a look back at some of The Simpsons’ very best and brightest jokes and gags about TV – from parodies to — well — poochies.

AN ITCH YOU CAN’T SCRATCH

Show-within-a-show (within-a-show) The Itchy & Scratchy Show was already a tongue in cheek tweak on the time-honored violence in cartoons, but when ratings for the shorts started to dip, a new character – a hip and cool dog with an attitude named Poochie – was brought in to freshen things up.

Snarking on real shows like Cheers, The Brady Bunch, Family Matters, and countless others that tried to save their skins by bringing in a young rascally character, The Simpsons, which would face its own criticisms for never changing the formula over the years, zeroed in on why altering key ingredients often doesn’t work.

Even the way The Itchy & Scratchy Show show dealt with the poorly-received Poochie was a punch up from the TV cliche playbook – the vanishing character. While not as drastic as the sister on Family Matters who once went up the stairs and never appeared again, TV shows have occasionally had to course correct by killing off a character in between episodes. From Valerie Harper’s matriarch on what would become The Hogan Family to even more recent shows like Roseanne and Two and a Half Men.

Anyhow, Poochie was obliterated out in the cosmos. Perhaps a victim of Thanos’ snap.

Sometimes though, The Simpsons would just bring us to tears with a straight-up spoof. COPS in Springfield, featuring Chief Wiggum and his boys in all their madcap buffoonery (running from mummies, watching drive-in movies in a helicopter) was the perfect way to send up FOX’s hit series COPS while also giving Springfield’s finest a chance to stupidly shine. The Simpsons would hit us with hundreds of TV spoofs over the years, but some of their first involved fellow FOX programming.

The entire Simpsons clan got their own VH1 Behind the Music-style documentary in Season 11’s Emmy-winning “Behind the Laughter,” where they got to step out of their own show, as actors playing parts, for one of the most meta-escapades the series has ever done. Addiction, bankruptcy, injuries, tell-all books – the Simpsons would plummet down the celeb-reality rabbit hole with a triumphant chapter about the trappings of fame.

In “The Simpsons Spin-Off Showcase,” from Season 8, the show put a few more cracks in the fourth wall by presenting a meta-smorgasbord for possible Simpsons spinoffs, as ultimately a critique of lazy, uncreative cash-grab offshoots of hit shows. Cop adventures, three-camera sitcoms, and variety hours were the targets here as The Simpsons always tends to provide a clever running commentary about the dark side of pop culture domination – while in the midst of dominating pop culture.

Not a skewering, just representing a love of TV, The Simpsons has aped other shows’ opening credit sequences to hilarious effect. From King of the Hill to All in the Family to a song that sounds a lot like the Cheers theme (“Happiness is just a Flaming Moe away…”), The Simpsons always catches us off guard with a perfectly placed parody of a famous TV sequence.

Falling just outside of what’s considered official show canon, The Simpsons has offered up multiple “clip shows,” both as a way to experiment the format while also riffing on the lazy and stale idea of clip shows in general. In Season 7’s “The Simpsons 138th Episode Spectacular,” host Troy McClure not only showed viewers old scenes from the show when it was nothing more than a collection of animated shorts on The Tracey Ullman Show, but also an alternate ending to “Who Shot Mr. Burns? Pt 2.”

As a break out phenomenon in its own right, the series’ “Couch Gag,” which all started with the final few seconds of the opening credits featuring the family cramming themselves onto a couch in order to watch TV (which itself was a bit of medium salsa commentary about how everyone rushes home from work and school to ignore each other while watching television), has evolved into a running visual joke that spans different animation mediums and genre parodies.

Within this, The Simpsons has lovingly called out countless other TV shows – from Monty Python’s Flying Circus to The Late Show with David Letterman to Quantum Leap to recent shows like The Big Bang Theory and Adventure Time.

The Simpsons’ annual “Treehouse of Horror” anthology episodes mostly contain movie parodies – usually horror movies – but they do sometimes contain terrific TV nods. Commonly, references to famous Twilight Zone episodes, like “The Little People,” “The Masks,” and “Little Lost Girl,” or even other anthology horror and sci-fi shows (like Amazing Stories). That’s probably because the Treehouse episodes are, themselves, a tremendous time-out twist on The Twilight Zone.