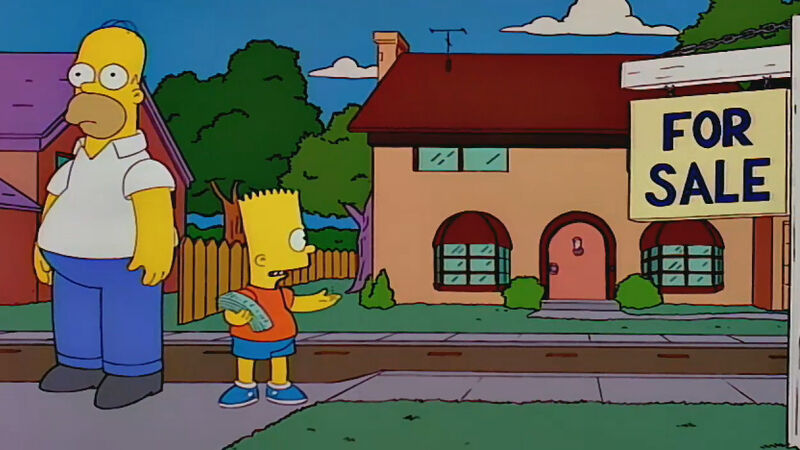 Reasons Why You Would Hate Being Homer Simpson’s Neighbor

You have to empathize with Ned Flanders. Aside from the fact that Homer Simpson was at least partly to blame for his wife Maude’s death, the Simpsons are possibly the worst next-door neighbors you can imagine. Sure, they seem lovable, goofy, and — on their best day —warm-hearted. But while the Simpsons’ boorishness and selfishness is amusing from a distance, you would be living a nightmare if their sitcom antics could have an actual impact on your life. Even if you were determined to avoid all contact with the Simpsons next door and go through your day in peace, here’s how they could still turn your life upside-down. (And you can watch all their misadventures now on Disney+)

The Simpsons family are often at the center of the biggest events around Springfield — sometimes because of their own actions, and sometimes infamy seems to fall in their laps. If a celebrity (or an impostor) just happens to drop by, or Bart, Lisa, Homer, Marge, or even Maggie do something newsworthy, you’re going to get — at a minimum — Kent Brockman and a TV satellite truck camped out by your mailbox. The trucks have to keep the engine running to power all the broadcasting equipment, plus they’ll be setting up daylight-brightness camera lights that will make your front yard look brighter than a sports stadium.

When the Simpsons are truly in trouble, they enrage literally all of Springfield. And when that happens the Angry Mob shows up at their door. The mob is usually brandishing torches and homemade weapons, even though they hardly ever follow through with an attack, dispersing after a short while. Nevertheless, when the whole town crowds around your neighbor’s front door, that means plenty of furious citizens tramping through your yard, blocking the whole street until they can be convinced that their anger over the Jebediah Springfield statue/Gummi Venus de Milo/Little League Baseball is pointless and silly. Just hope you don’t need to leave the house anytime soon.

Who shot Mr. Burns? Maggie Simpson, of course. She also smashed Homer in the head with a hammer after she saw it on The Itchy and Scratchy Show, she could fend off a monkey with a broken bottle, and she sniped at Fat Tony and the other mobsters with a long rifle from her bedroom window. And before you think you might be safe in your home from an infant who can barely shuffle around on her knees, remember the elaborate pacifier heist she planned at the Ayn Rand School for Tots. No one is safe from Maggie Simpson.

The most important industry in Springfield seems to be Montgomery Burns’ nuclear power plant. While most nuclear plants are well shielded and generate less radiation than a coal plant, we’ve seen enough horror stories about how the Springfield Nuclear Power plant operates to think that you wouldn’t want to live anywhere near those cooling towers. The only reason not to immediately move after Blinky the Three-Eyed fish swam through your local river would be if the news of toxic waste everywhere caused your property value to plummet. What’s more, there’s a good reason to think that the Simpson home has even more radiation than the rest of the town. After all, Homer is the safety inspector at the plant, a place so riddled with safety violations that German investors were forced to sell the plant back to Monty Burns for half what they paid for it. Homer’s clothes are probably as lethally radioactive as the protective suits worn by those hapless firefighters at Chernobyl.

The Wreck of Their Home

The opening credits of The Simpsons represent a typical evening for America’s favorite family: Bart writes his last line in detention and skateboards home, Lisa sax solos out of band practice, Homer leaves work, and Marge takes Maggie grocery shopping. In the first two decades of The Simpsons, Homer was merely surprised to see Marge pulling in the driveway before opening the door and running inside to the couch gag. Since the intro was revamped for the show’s changeover to HD in 2009, Marge now actually hits Homer with her car, throwing him through the door where he leaves a Homer-shaped hole. So on a typical day, the wife almost kills her husband with her car, and they destroy the door to their garage. Every. Day. The last thing you’d want is to let your kids play in the front yard when the Simpsons might be rushing home to watch TV.