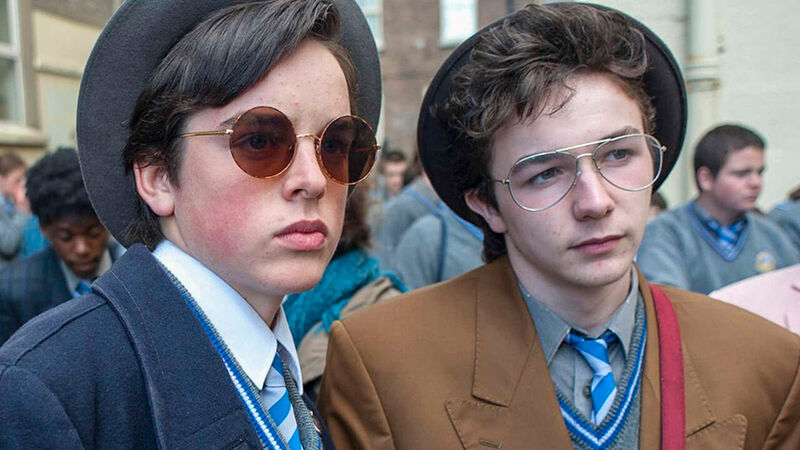 ‘Sing Street’ and the Power of Bittersweet Stories

Filmmaker and musician John Carney always seems in danger of making a movie that’s just too sweet. Sing Street, released earlier this year, looked to be the movie that threatened to contain the whole sugar bowl. Carney’s 2007 indie hit Once is a heartwarming Oscar-winner that spawned a real-life romance between its stars. That makes it sound sweet enough to shatter teeth, but Once doesn’t just tug on heartstrings. It probes something deeper. Carney has a knack for this, and that’s an important part of why his films have found wide audiences and pleased critics. And yeah, Sing Street is very sweet. But Carney understands the sentimental and saccharine in ways that only a musician can. In Sing Street, he finds ways to temper that sentimentality with a sobering edge and really good music.

Sing Street bubbles with conflict from the start. Set in Dublin in the mid-eighties, the film introduces us to sensitive 15-year-old Conor Lalor (Ferdia Walsh-Peelo) as his parents (Aidan Gillen and Maria Doyle Kennedy) fight in the next room. It’s not a funny little squabble — they yell and swear and hurt. To ease their financial desperation, his unstable family takes him out of his nice private school and enrolls him in Synge Street: a Catholic school that feels more like a juvenile detention center than a school. Bullies both young and old swarm around Conor.

But when Conor sees the beautiful Raphina (Lucy Boynton) standing across the street from his new school, he simply has to say something to her. Inspired by the new video for Duran Duran’s “Rio”, he finds the courage to ask Raphina to star in a music video. She agrees, but there’s a problem — he doesn’t have a band. Conor pulls one together with surprising convenience and, wouldn’t you know it, they suck. They suck just like every new high school band sucks. But Conor finds purpose in music and a muse in Raphina. Even in their first piddly tune, there is promise. Calling themselves Sing Street, this dweeb outfit goes from poorly aping Duran Duran to writing hooky, original songs of teenage rebellion and first love.

And while Sing Street would be a good movie without Conor’s songs, those songs could be what carries it to the Academy Awards. Original songs from Carney’s Once and Begin Again received Oscar nominations in 2008 and 2014, respectively. Once took its Oscar home, and later became an acclaimed Broadway musical. I’ve got reason to believe that Sing Street’s “Drive It Like You Stole It” and “Up” will be strong Oscar contenders, but they’re sure to face steep competition from Disney’s Moana. This upcoming animated feature from the directors of Aladdin and The Little Mermaid features original music by Lin-Manuel Miranda. Who’s he? Oh, he’s only the creator of massive cultural phenomenon Hamilton. No big deal.

But its eventual recognition (or lack thereof) at any awards ceremony isn’t any real barometer of quality. Sing Street is still a testament to the power of pop music on film. It knows its wheelhouse, and it knows the kinds of characters we frequently see in movies about popular music. Jack Reynor (Transformers: Age of Extinction) plays Conor’s older brother like a burnout Lester Bangs, spouting bon mots about the nature of rock music and how no woman can truly love a man who listens to Phil Collins. Conor’s bandmates receive just enough screen time to establish a group dynamic, but fade out in the second half of the film. The film’s romance takes center stage, as it should.

Not just anyone can make a good movie about musicians and the importance of music. It takes someone like John Carney, who understands the making of music and the self-importance of talented performers. He understands how some men happen into art because they want to impress women, and he knows the sexist implications of that truth. He can wrap an audience up in a romance, even when the film’s romantic leads aren’t sharing the frame. That’s especially apparent in the film’s biggest musical sequence, in which Conor’s imagination runs wild during a video shoot. It’s an Irish kid’s vision of an American high school prom, right out of Back to the Future. It’s breathtaking to see Conor’s dreams dancing on the screen, but Carney knows it’s about more than that. It reminds us why Conor is so sold on the fantasy: he needs it to survive.

Between the eminently listenable soundtrack and knockout musical sequences, it’s a safe bet that Sing Street will get the recognition it deserves come awards season. It’s one of the year’s best feel-good movies, but not because it’s candy-sweet. Like any great romance, it achieves optimal levels of bittersweet.