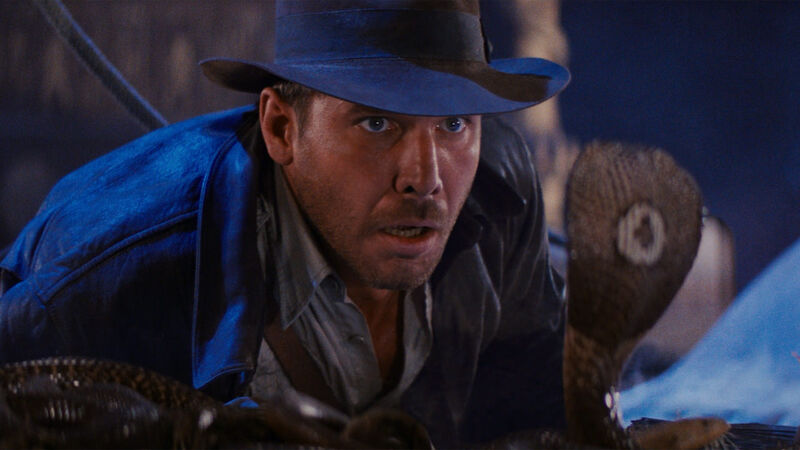 Snakes elicit strong reactions from people. Whether that reaction is love, hate, or a healthy respect depends entirely upon a person’s culture and personal fears. February 1 is Serpent Day, a day to reflect upon our fears – more specifically, to our fear of snakes. These often misunderstood reptiles help keep rodent populations in check and are symbols of wisdom and power. To celebrate Serpent Day, we reflected upon our favorite snakes in pop culture.

Harry Potter and the Chamber of Secrets is a creature feature, and a pretty fun one at that. It’s crawling with spiders and infested with doxies. It also has one of the best fantastic beasts in the entire series: The Basilisk. It’s fifty feet long and packs deadly venom. But what snake needs venom when it can kill with just a look? Anyone who locks eyes directly with a Basilisk will fall dead. Anyone who sees the eyes indirectly (e.g., in a reflection) is instantly petrified. Needless to say, having one crawling around your wizard school is a huge problem — especially when it’s under Lord Voldemort’s control.

On screen, the Basilisk was a much more formidable foe. Its design is utterly iconic, with a dragon-like face and frilled head. The effects used for the Basilisk were a huge leap ahead of the effects in The Sorcerer’s Stone. Though not all of the CG holds up well by today’s standards, the shots that used the full-scale animatronic are pure monster-fueled fun. The few minutes of screen time the Basilisk gets is worth about six viewings of Anacondas: The Hunt for the Blood Orchid.

A part of everyone loves a movie about snakes or a movie with Jon Voight. At the very least, the flick can guarantee to provide bad acting, hilarious snakes, or in the case of Anaconda, both. This “horror” film gives viewers what may be Jon Voight’s best (worst) acting performance. He sort of portrays a “stranded Parayguan snake hunter” with a perpetual frown and a penchant for hilariously creepy moments. In most of his roles, it’s near impossible to not just see Jon Voight. In this one, it’s near impossible to avoid chuckling whenever he is on screen. As for the snake itself, the anaconda’s graphics are perfectly awful. Despite coming out four years after Jurassic Park made dinosaurs look dang near real, Anaconda gives its namesake a digital treatment more fitting of previous decades. It is truly amazing that the 2nd and 3rd and 4th and especially the 5th (crossover with Lake Placid series) installments didn’t manage to get any better (maybe by design?). Cheers to this hilariously awful franchise!

Danielle Ryan on Snakes on a Plane

There are few movies as completely insane as Snakes on a Plane. In an attempt to please a rabid internet fanbase, producers on the film made major changes to the production. They upped the violence, sex, and swearing, and gave us all the “I am sick of these [expletive] snakes on this [expletive] plane!” catchphrase. Like the internet, Snakes on a Plane is an exercise in excess.

The plot is bonkers. A surfer in witnesses a Yakuza hit and is on a plane to testify against the killer. To stop him, they release a whole bunch of snakes onboard his flight to Los Angeles. To make the snakes go crazy, they spray all of the leis full of pheromones. Samuel L. Jackson is one of two secret agents trying to protect the surfer witness. After both pilots are killed, a passenger lands the plane using skills he learned playing video games. There are gratuitous sex scenes, crazy violence, and one snake even eats a passenger’s beloved pet Chihuahua.

Snakes on a Plane is the kind of awful movie that’s still a blast to watch. It’s completely trashy and doesn’t ever try to take itself seriously. For viewers tired of three-hour-long, super-serious superhero movies, these snakes are the perfect remedy.

Now, when it comes to snakes in a game…nothing quite beats the simple pleasures. As a result of crazy success with the Super Nintendo’s Donkey Kong Country Animal Buddies (Rambi, Expresso, Winky, Enguarde and Squawks), Rare decided to add more of them to Donkey Kong Country 2: Diddy’s Kong Quest. This new lineup included Squitter, Clapper, Quawks and Rattly the Rattlesnake.

Rattly’s story (yes, he has one) details a quiet life on his home island, Crocodile Isle, until the Kremling Krew moved there after the events of _Donkey Kong Country_. Seeking gleeful revenge upon his enemies—or at least a good thwomp on their heads—Rattly joined the Kong Family and assisted Diddy and Dixie in their search for Donkey Kong.
His abilities were extremely useful in each of Donkey Kong Country 2’s difficult, high-elevation levels. He could bounce, attack guarded Kremlings and was the only buddy that could perform a super-jump. Cool, right?

Unfortunately, Rattly hasn’t appeared in another Donkey Kong game since the Game Boy’s Donkey Kong Land 2. Maybe, after getting what he wanted, he decided to take it easy on Crocodile Isle. That, or he turned bad and died in Donkey Kong Country 3. Life’s hard without limbs.

Indiana Jones is the toughest hombre around. Nothing scares him. Hell, he took on the Nazis with only a whip and still beat them. No one kicks butt like Indy and no one does it with the same devil-may-care attitude and gruff charm.

But even Indiana Jones is afraid of snakes. Big time. Why? For the same reasons we all are: they are slick and slimy and sneaky and dangerous. They’ll slide up on you and before you know it you’re poisoned or dead. Snakes are so creepy that even Indiana Jones is spooked by them. It takes a lot to give this man the heebie-jeebies.

Indy’s fear of serpents is a great character trait for a couple reasons. One, it humanizes him in a fun and relatable way. He’s not so different than you and me! Two, it reminds the audience just how scary those little buggers can be. If they frighten a hero who has gone toe to toe with Hitler, aliens and heart-snatching cults then they should frighten you too.

A pair of 8-bit snakes named Rattle and Roll are the main characters in one of Nintendo’s greatest forgotten classics. In Snake Rattle ‘n’ Roll you play as one of the two serpents as they eat their way through level after challenging level. You must devour enemies called Nibbley Pibbleys and grow your body similar to the golden age PC game Snake. Once you’re at your max length, ring a bell and move ahead.

Snake Rattle ‘n’ Roll is one of those obscure games that deserves way more love than it typically gets. An asymmetrical game similar to Q*Bert, this title is set in a strange and bizarre world much like the NES cult classic Marble Madness. If weird and unconventional retro games were as universally praised as Mario and Sonic, Snake Rattle ‘n’ Roll would be a beloved treasure. Rattle and Roll are two cool little snake dudes that starred in their own Nintendo game. They’re pretty rad.

In respect of snake day, it’s only fitting to honor the snake Hiss from Disney’s animated Robin Hood. An underling of Prince John, he is utterly definable as the lackey who is contented with the scraps of power his master leaves. He is underhanded and manipulative, but utterly subservient when his master takes notice of him. This is interesting, as he is the more intelligent and quick-witted of the two.

As many lackeys go he is sly in his differences. He does not strive to take power, merely wanting what wealth his master will give him. Never the direct enemy of Robin Hood, it is his desire for wealth that drives him to follow his master’s ambitions.

Hiss is not overtly power hungry, not overly intelligent, or dim, even when compared to Prince John, and not overly wicked. His core strength is not hypnosis but his ability to assess those he hypnotizes. It could be stated that his power to hypnotize is so great because of his ability to understand the people and situations in which he does so. As most secondary villains go, he stands alone. A memorable and distinct character, he is often the opposition of common thoughts on snakes.