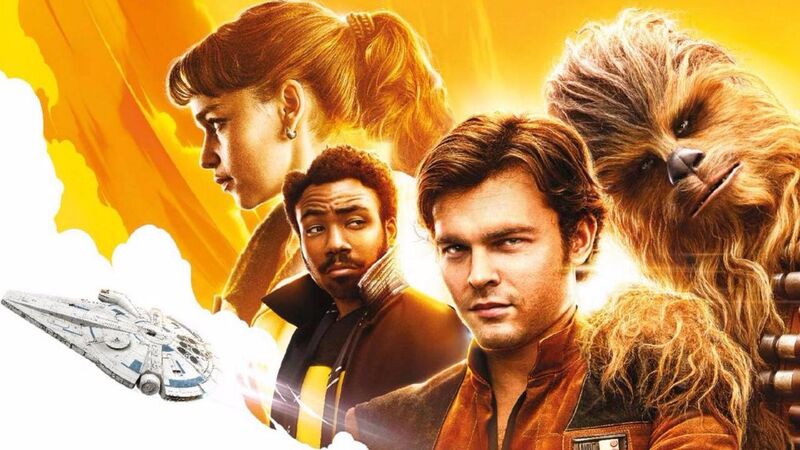 8 WTF Moments From the ‘Solo: A Star Wars Story’ Trailer

After weeks of speculation that the Solo trailer was about to drop, it’s finally here. Yes, we knew in advance it was coming — but that didn’t dampen our enthusiasm for it. In fact, the weekend’s Super Bowl teaser only stoked it. Without further procrastination, here are the top moments from the trailer that left us wide-eyed.

1. Callback to ‘Return of the Jedi’

Yes, Solo is a standalone film — but that doesn’t mean it’s totally divorced from what’s gone before. On the contrary, just as Rogue One told the story immediately preceding Episode IV, which kicked everything off, so Solo is also a prequel. It goes back in time to tell the backstory of Han Solo, the scoundrel we’ve known and loved. And at the beginning of the trailer, there’s a nod to the film’s origins in a glimpse of a scene that has echoes of Return of the Jedi’s speeder bike chases.

As Han Solo attempts to evade capture in a rudimentary landspeeder vehicle, he’s pursued by a scout trooper on a boxy looking hover-bike that’s a cross between a ROTJ speeder bike and Rey’s speeder from The Force Awakens. The bike crashes amid a hail of sparks and the trooper goes tumbling.

Oh, my. That’s some shot of the interior of the Millennium Falcon. Its shiny white walls are like something from a show home. Compared with the “hunk of junk” we know from later in the series, it’s something to behold. It’s evidence that Han’s claims that the ship was really something special in its day hold up. Can’t wait to see more of it.

As Emilia Clarke’s Qi’Ra emerges from the Falcon, droid trailing behind her, she looks every bit as royal as her Game of Thrones counterpart, Daenerys Targaryen. We don’t know much about her character yet, but she’s even got a droid sidekick (L3-37) in this shot, replacing her GoT advisor Tyrion Lannister. That cape, though, is reminiscent of a Praetorian guard, or even Vader himself. There’s definitely a hint of Dark Side about it.

There’s a fleeting glimpse of the kind of imagery we associate with the Mos Eisley Cantina on Tatooine. It’s the place where Luke Skywalker and Obi-Wan Kenobi first meet Han Solo in Episode IV, who is busy trying to evade capture by Greedo on Jabba the Hutt’s behalf. Another homage paid to the original trilogy, then.

Here, Han looks at home, silhouetted in a dimly lit room surrounded by a ragtag bunch of creatures.

It’s great to see Lando Calrissian back behind the controls of the Falcon — this time with droid co-pilot, L3-37, as opposed to Nien Nunb, his co-pilot during the Battle of Endor. Of course, the ship used to belong to Lando before Han Solo won it from him during a bet. Here, he and his co-pilot share a cool two-fingered salute before making the jump into hyperspace.

Is Solo going to build in a romance between Han and Qi’Ra? We only ask because there’s an electric moment of chemistry between the two in the trailer. She says to him as the two stand face to face: “I might be the only person who knows what you really are.”

His response is to laugh somewhat nervously, before saying: “What’s that?”

His smile, the way he looks at her, and his effort to turn on the charm alongside a slight sense of discomfort are all reminiscent of his dynamic with Leia — and Qi’Ra certainly seems to have got the measure of him here. A lot like Leia, in fact.

It’s brief — but it’s there. As Han Solo stands facing masked foe Enfys Nest, who is armed with a stick, Han unclips his holster and readies himself to draw. Remember that classic moment in Raiders of the Lost Ark where Indiana Jones loses patience with his sword-wielding opponent? Yeah, this is like THAT. In Solo, the young Han is played by Alden Ehrenreich. The older version, of course, is played by Harrison Ford, the man who brought both characters to life.

This time, to The Empire Strikes Back. The final moments of the trailer recall a memorable scene from Episode V. Just as the makeshift Millennium Falcon crew think they’ve evaded trouble, with Han Solo assuring them: “I thought we were in trouble there for a second, but it’s fine; we’re fine,” they immediately fly into more danger. Namely, a huge tentacled creature. Out of the frying pan and into the fire, you might say.

The last time the Falcon came up against a similarly gigantic creature was when they flew into an asteroid field and hid unknowingly into the mouth of a giant space slug — from which they only just escaped.

Solo: A Star Wars Story hits screens on May 25.