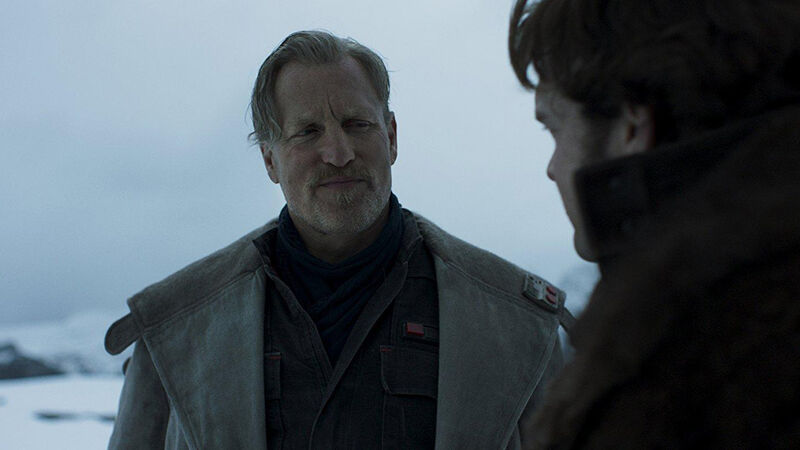 There’s been confusion surrounding Woody Harrelson’s character in new ‘Star Wars Story’ Solo. Over his name. His intentions. And whether or not he’s a hero or villain.

As the character is something of a mentor to Han Solo, speculation suggested that Harrelson was playing Garris Shrike, a father figure to the character, who first appeared on the page via The Han Solo Trilogy. But Harrelson then revealed — on The Tonight Show With Jimmy Fallon — that he’s actually playing a brand-new character, called Tobias Beckett.

As for whether he’s a good guy, there’s evidence to suggest yes. And quotes that hint at the opposite…

Who is Tobias Beckett?

Beckett is a thief, smuggler and all-round scoundrel, who teaches young Han the tricks of his trade in the movie. Though speaking to Entertainment Weekly, writer Lawrence Kasdan suggests the friendship isn’t entirely Beckett’s idea.

“Han sort of forces himself into Woody’s life,” explained Kasdan. “It starts a relationship that has enormous impact on what kind of person Han will be.”

Director Ron Howard goes further, claiming Beckett is the biggest single influence on Solo. “He really shapes Han more than anybody,” Howard stated when speaking to EW. “As Han comes to realise that in a lawless time he needs to try to come to terms with some kind of moral code.”

The film’s story revolves around Beckett putting together a criminal team to carry out a daring heist. One he hopes will raise his status, and make them all rich in the process.

Lawrence Kasdan and son/co-screenwriter Jon Kasdan both re-read Treasure Island before starting work on Solo, because they wanted the Tobias Beckett and Han Solo relationship to resemble that of Long John Silver and Jim Hawkins.

In Robert Louis Stevenson‘s classic adventure story, Silver is a pirate with one leg and a parrot on his shoulder. He befriends young Jim Hawkins and takes the boy under his wing. But Silver is also clever, cunning and opportunistic, and doesn’t hesitate in turning on those around him when treasure is at stake.

Will Beckett turn on Han in similar fashion during Solo? The jury’s still out on that one, but he does rather ominously say this during one of the trailers: “Let me give you some advice. Assume everyone will betray you and you will never be disappointed.”

Which could very well apply to Tobias and Han. Meaning Beckett will be one to keep an eye on when Solo hits screens on May 24 in the UK and May 25 in the US.

Chris Tilly
Chris Tilly
FANDOM Managing Editor in the UK. At this point my life is a combination of 1980s horror movies, Crystal Palace football matches, and episodes of I'm Alan Partridge. The first series. When he was in the travel tavern. Not the one after.