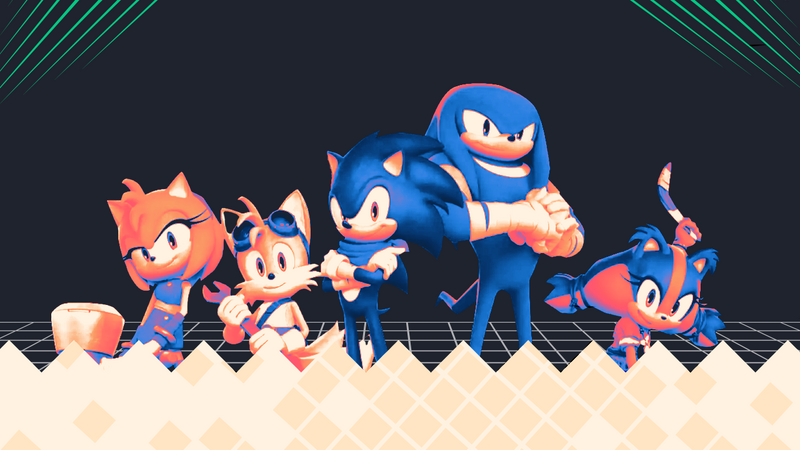 At nearly 30 years old, Sonic the Hedgehog has boosted his way across most mediums. With his face already emblazened across sweatshirts, adorning lunchboxes and covering comic books, this month Sonic finally makes his live-action debut on the big screen. Yet, as fans will know, our beloved hedgehog is no stranger to starring in non-playable adventures.

While video games are the Blue Blurs’ natural habitat, his television legacy lags not far behind. In 1993, the Adventures of Sonic the Hedgehog cartoon became a huge hit, paving the way for four further installments, including the originally named Sonic the Hedgehog, Sonic Underground, Sonic X and most recently, Sonic Boom.

Produced by SEGA America for Cartoon Network, Sonic Boom altered its protagonists’ looks and styles, while cutting down the extended Sonic family to the core cast of Tails, Knuckles, Amy, Doctor Eggman, newcomer Sticks the Badger, and the hedgehog himself.

The series premiered on November 8th, 2014 —  and things weren’t looking great for the spikey-haired speedster. Coming out three days after the launch of Sonic Boom: Rise of Lyric on the Nintendo Wii U, the show unexpectedly faced an uphill battle, thanks to its struggling video game counterpart. Deemed an abysmal outing for Sonic and co. that warranted largely negative reviews, the game currently sits at a shameful critical consensus of 32 on Metacritic.

Yet, despite its playable brethren being a series low point, against all odds, Sonic Boom the show is an absolute joy.

When it hit TV screens, the cartoon received reasonably positive reviews, yet in 2014, the Sonic Boom name was already sullied. Thankfully, streaming services stepped in to save the day. As the years have passed, more and more people have been discovering the kids show via Netflix, Hulu or even internet memes, with many now realizing just how clever the writing on Boom was.

Finding a devoted fanbase across both young and adult audiences, many fans online find themselves wondering why it was canceled.

Sonic Boom only ran for two seasons but undoubtedly made the most of the time it was given, squeezing in more zingers than most kids show manage in a lifetime. We tracked down the writers of this hidden chaos gem to find out more about their time on the show, and how they penned a cult classic.

“Looking back on it, my time on Sonic Boom was sort of a blur,” says story editor Alan Denton, “Most shows do maybe 20 to 30 episodes per year but on Sonic Boom, we did 52 episodes in each of our seasons– 104 total.”

“I’m very proud of Sonic Boom,” says head writer Bill Freiberger with a smile. “I think we created a very funny and entertaining series that can be enjoyed by a wide variety of people.  I consider myself very lucky to have been able to work with such a talented group of people on a labor of love.”

Anyone that has spooled through an episode or two can see the affection poured in by the writing team. As further story editor Greg Hahn puts it: “[working on Sonic Boom] was a childhood dream come true!”

“I was a fan growing up,’ Hahn continues. “I played Sonics 1 – 3 pretty religiously as a kid, and I watched a hell-of-a-lot of Adventures of Sonic the Hedgehog on Saturday mornings. To be able to write for and story edit a show about one of the most influential characters in all of video games — it’s still hard to imagine!” he tells Fandom.

“Another thing I always shake my head at when looking back, is how intricate the stories in Sonic Boom are,” reflects Denton, “Next time you watch an episode, try counting the number of scenes. Like, literally count them. Pound-for-pound, we were squeezing way more story into the 11-minute format than we needed to.”

Something that set the overlooked animated show aside from its peers was its writing phase, according to Denton.

“I think ultimately, though, what made a huge difference was the fact that we weren’t writing this show in the SEGA or Cartoon Network corporate offices,” he says.

“Instead, we were writing it in Bill Freiberger’s pool house. There weren’t executives or an animation team or distractions or anything like that. I mean certainly, Bill had to deal with all that stuff in his capacity as head writer but when breaking the stories and creating the scripts, it really was just three guys in a pool house in the San Fernando Valley trying to make each other laugh.

“And I think that is a big reason why the show feels so organic and different from a lot of other kids TV shows to air before or since.”

Another element that helped keep the show feeling fresh was the way it balanced its humor. Its use of language was never trivialized, as well as being genuinely funny and quotable. As any writer will tell you, comedy is extremely difficult to pen, and finding that sweet spot that will appeal to both kids and adults is a sacred art. So what was the Boom team’s trick?

“My goal was to write a kids show that didn’t talk down to kids,” says Freiberger, “My hope is that in twenty years, when our young fans come back to the show as adults, they’ll still find it fresh and funny.  I would love for them to laugh at the jokes they didn’t get the first time around.”

Hahn agrees: “If we came up with something in the writing process that got a laugh in the room then we knew it was funny! And we didn’t have to dumb it down for kids because we don’t really believe in doing that.”

Many jokes hit so well, that they even made their way to the forefront of the internet. Be it Knuckles discovering that Sonic’s middle name isn’t actually “The” or Eggman convincing rival Shadow that Sonic has been slandering him, through a clearly stitched-together video of unrelated quotes.

For both Denton and Hahn, a particular moment regarding a stakeout involving Vector the Crocodile and the blue speedster remains a highlight. Where the latter commented that on TV “there’s usually two lines of dialogue and then they see their guy”. Following this, the reptile states that “life’s not like TV” before gasping and shouting “there he is!”.

“It’s just such a good, clean joke, told as concisely as possible. I was so proud of it, I made it my pinned tweet for two years.” says Denton.

Sonic boom needs to come back xD
This was so perfect pic.twitter.com/LIdPgh4RGb

One of our personal favorite moments is the ongoing segment surrounding Stick’s obsession with government conspiracies, and rogue forces trying to control her mind. This was echoed by the head writer.

“My favorite character to write was Sticks,” agrees Freiberger, “I often said that she spoke the ‘author’s message’.  The fun thing about her was that she had these crazy paranoid beliefs about technology, the media and government that always turned out to be correct in the end.”

Denton adds that: “Another joke that seems to score well with people is Knuckles’ speech on the nuances of feminism.There’s a scene where Amy is setting up for a soccer kick, saying something to the effect of: ‘Can the young woman beat the guys and prove once and for all that a female athlete is just as capable as a male?”

Hahn states that while “the feminist Knuckles joke might go over younger audiences head, there’s a parent or older sibling in the room who can appreciate something a little more irreverent.”

This type of writing is why Sonic Boom feels like a breath of fresh air compared to its childish competitors. However, when ending its season 2 run on November 18th, 2017, a renewal never followed, with the writing team all subsequently confirming their departure.

It was an undoubtedly sad end for a show with such potential. Still, despite fans being left wanting more, the 104 episodes amassed do outrun any other adaption of Sonic prior (Sonic X’s 78 episodes comes closest). So, there’s that at least.

While nothing is currently on the horizon, many fan campaigns have seen programs resurrected after cancellation i.e. Brooklyn Nine-Nine, Family Guy, Futurama, Community — etcetera. Streaming services are now rolling out content like never before, meaning there’s always a chance that a cancelled classic could make an unlikely return. Unfortunately, though, this is something that the writers believe is unlikely to happen.

The final update was given by SEGA director of animation Yukio Kusumoto (via ComicBook) in October, confirming the network is “thinking about doing something new.”

From catastrophe to cult classic

Still, the team couldn’t be prouder of what those two seasons achieved.

“With the constantly evolving world of streaming, it’s hard to really say where any show will end up in the long run,” says Hahn. “It’s already starting to develop this weird, almost cult-like status. We didn’t make your typical TV adaptation of pre-existing IP – we made the weird sitcom version and that’s kinda cool”

“I think the best way to share Boom is in the joke compilations that I see people post on Twitter or Youtube or Imgur,” Denton says. “I don’t re-watch many episodes, personally, but when I’m getting nostalgic, those compilations are what I go back to. I think seeing them all end-to-end really highlights the essence of the show at its best.”

And for head writer Freiberger he ” just wants people to watch and enjoy Sonic Boom.I hope they laugh a little, get a kick out of the stories, and have some fun with our versions of the characters.”

A simple ask, and since the show’s untimely exit, it’s a scenario that has become true for many. If you find yourself being underwhelmed by Sonic’s debut on the big screen, take a chance with Sonic Boom — it may just surprise you.