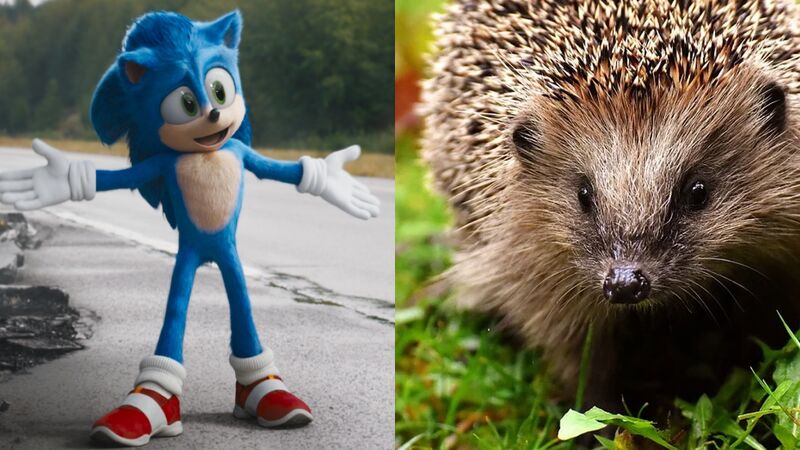 What Does Sonic The Hedgehog Get Right About Actual Hedgehogs?

After what seems like a bazillion years, this weekend finally sees the release of the Sonic The Hedgehog movie. It’s been a chequered journey from there to here. A trailer that prompted much ridicule. A return to the drawing board. A new trailer. Actual excitement for the coming film. It was the eyes. No, the legs. The legs were just too… human. But wait, this is a film about a hedgehog that can run faster than the speed of sound. Who exactly is expecting reality here?

And so the question, ‘what does Sonic The Hedgehog teach us about actual hedgehogs?’ entered our mind. And it never went away. The very nice lady Fay Vass has been working for the British Hedgehog Preservation Society for the last twenty years. We had an idea. You’re about to read that idea. Who better than Fay to dispel any myths perpetrated by the spiky blue blur? Nope. We can’t think of anyone. Fay it is, then.

MYTH ONE: HEDGEHOGS ARE EXTREMELY FAST

“Actually,” says Fay, “people are often surprised by how fast hedgehogs can move. They can move at 4mph, which isn’t quite Sonic The Hedgehog speed – but it’s pretty fast for a small, short-legged mammal.” Fay’s right. That’s faster than we were expecting.

It’s not Cheetah speed (at 75mph the fastest mammal in the animal kingdom), it’s not even human speed (Usain Bolt did 100 metres in 23.37mph in 2009), but it’s positively nippy compared to the three-toed sloth (0.003mph), the koala (0.24mph) and the Loris (1.2mph). What we want to know, is who’s collating this data? Is there an animal kingdom Olympics we know nothing about?

IN CONCLUSION: Not correct – but not incorrect either.

MYTH TWO: HEDGEHOGS AND FOXES CAN BE FRIENDS

Sonic’s best friend is a fox; to give him his full name, Miles ‘Tail’ Prower (a pun on ‘miles per hour’, gettit?) But what is the relationship between hedgehogs and foxes in reality? Fay sighs. “Well, the hedgehogs natural predators are badgers, dogs… and foxes.” So that’ll be a no then?

“I think a hedgehog and a fox could share an area with no problems — if the fox was well fed. The hedgehog wouldn’t be his preferred meal because it’s a prickly one and he’d have to work quite hard to learn how to open it up. I don’t think the two of them could establish a meaningful relationship though…” Reader, we didn’t dare ask how a hedgehog would co-exist with an echidna.

IN CONCLUSION: False. But sometimes not depicting reality is preferable to young and weak-stomached audiences.

Sonic The Hedgehog has loads of mates. There’s Charmy (a bee), Tails (a two-tailed fox), Espio (a chameleon), Rouge (a bat), Vector (a crocodile), Knuckles (an echidna), Blaze (a cat), Amy (a hedgehog – and also Sonic’s girlfriend), Cream (a rabbit), and Cheese (we have no idea). Bet that made choosing his ‘top six’ difficult on MySpace. But what about real ‘hogs?

“Hedgehogs are extremely solitary creatures,” says Fay. “They even avoid other hedgehogs, other than when they need to come together to mate, or if they’re rearing young. Even then, the male has nothing to do with rearing the babies…” Sonic. It’s 2020. We’re ashamed of you.

IN CONCLUSION: False. You can often find hedgehogs alone on a Friday night, listening to My Chemical Romance, crying.

Crazed scientist Doctor Ivo ‘Eggman’ Robotnik is the main antagonist in the Sonic The Hedgehog series. He wants to conquer the world and imprison the animals. We’re sensing some loose parallels here with the real-world human impact on hedgehogs and the environments in which they live. Rough estimates put the hedgehog population in England, Wales and Scotland at about one million. In the 1950’s it was 30million.

“There’s no doubt that humans are the biggest threat to hedgehog’s existence,” says Fay, solemnly. “We’re eroding their habitat with developments like housing and new roads; our pesticides poison the hedgehog’s natural food source of beetles, bugs and grubs; there’s all sorts of problems with cars and with lawnmowers too…” Oh god.

“Another problem is the carving up of human living spaces,” continues Fay. “Gardens are good habitats for hedgehogs, but because of solid walls around them, they can’t get in. Part of what we’re trying to do at the moment is encourage people to put a CD-case-sized hole in their fences, so hedgehogs can have free passage…” Anyone else feeling really bad about themselves right now?

IN CONCLUSION: Correct. A thousand times over.

SEGA being a Japanese company would suggest that Sonic is a Japanese hedgehog. <Confused emoji face>. Do hedgehogs even exist in Japan? “They don’t!” says Fay. “There are hedgehogs all over the world though – in the UK they’re called Erinaceus europaeus or the West European hedgehog.”

There are in fact seventeen different types of hedgehog across the world; in Europe, the Middle East, central Asia and Africa, while they’ve also been introduced to New Zealand. Our favourite is the long-eared hedgehog, native to the Middle East. Fun fact — they can actually eat scorpions, which is totally badass.

IN CONCLUSION: No hedgehogs in Japan – though the trend of hedgehog cafes – where you can go drink a latte in the company of a prickly, wee one – is booming. The jury is out as to whether that’s cruel though…

“They definitely don’t like rings,” says Fay, trying not to laugh as she says that ridiculous sentence. “They’re not collectors, really. They don’t hoard food; they build their fat reserves up for their hibernation. They keep their fat on their body. They will collect things like twigs and leaves for their nests, especially when it’s baby season. You’ll often see them pulling up grass from lawns.” But no Discount Card at H. Samuel? Fay’s laugh says it all.

IN CONCLUSION: This is all getting a bit silly.

Admit it. The worst thing about Sonic games are the underwater levels. F**k The Labyrinth Zone. F**k The Chemical Plant Zone. What’s the point in making a videogame which is all about speed and then making a bunch of levels where you have to move slowly and precisely? Ugh.

“Actually, hedgehogs are great swimmers,” says Fay. WHAT? “No, really. They only get into trouble when ponds have steep edges and they can’t get out. But hedgehogs love a swim…”

IN CONCLUSION: This has blown our mind, it really has.

For more information on British Hedgehog Preservation Society and the work they do, visit https://www.britishhedgehogs.org.uk/