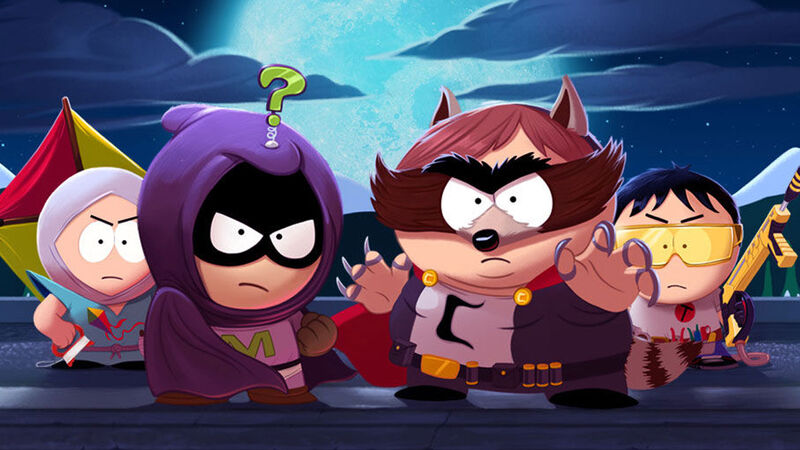 ‘South Park: The Fractured But Whole’ Review: A Real Gas

If there’s anything that South Park creators Matt Stone and Trey Parker have taught us over the years, it’s that no topic is ever too controversial for their beloved cartoon. With the seminal series tackling everything from police racism to the art of queefing, it’s this wonderful unpredictability that’s earned the show a legion of devoted fans.

It was fittingly unexpected then, when Stone and Parker stepped on stage at E3 2012 and revealed that they were writing a South Park game. Yet, as much as we all love video games, if we’re honest, we were a bit wary about the news. With the show’s episodes famously cut together just hours before they’re meant to air, and game development often taking several years, we doubted whether it was even possible for The Stick of Truth to feel as topical as the series.

Somehow though, it did. Stone and Parker managed to not only write a game in which aging jokes felt surprisingly relevant – but more importantly – they made an interactive experience that perfectly captured the subversive and ridiculous sense of humor that makes South Park, well, South Park.

Now, three years later, the duo are shipping another game. But after falling victim to more delays than you can shake a (fake) magic stick at, have they managed to pull off the impossible a second time?

Before we get into that though, lets start with what’s changed for the ridiculously named sequel. After poking fun at The Lord of the Rings and countless fantasy tropes in The Stick Of Truth, The Fractured But Whole sees Stone and Parker taking aim at everyone’s latest pop culture addiction: super hero movies.

Picking up where its predecessor left off, a brilliant opening scene sees swathes of ye olde-looking kids clashing wooden swords in the street. With bugles blaring across the neighborhood and rival kids hiding under a hilariously fake-looking cardboard dragon, players find themselves donning their wizarding robes as the town’s new kid once again. Yet, before players can get into the fantasy-themed fray, Eric Cartman appears with other ideas.

Dressed up as his racoon-inspired alter ego – the Coon – Eric declares that he has an important mission that immediately requires everyone’s help. In a brilliant moment, the kids then all reluctantly agree to go and get changed and play super heroes instead.

Like with a lot of the show’s standout moments, The Fractured But Whole is at its funniest when it fully embraces the fact that its characters are just children. Whether its bemused drivers scolding you mid-battle for playing in the road, or Cartman just completely misunderstanding how babies are made, it’s the mix of the outlandish and the childish that makes South Park so appealing.

While ribbing super hero cliches elicits its fair share of chuckles too, we found that the jokes which strayed away from the comic book cliches had us laughing the hardest. Still, it’s not just the target of Matt and Trey’s japes that has changed this time around.

With The Stick Of Truth’s dialogue being its biggest strength, this sequel aims to address that game’s biggest failing: its battle system.  While the last game’s turn-based scraps were perfectly serviceable, the overly basic Paper Mario-esque combat quickly lost its charm. Thankfully, it seems like new developer Ubisoft San Fransisco is all too aware of this.

Now, battles play out on a Fire Emblem style grid instead. With your party and your foes staggered around a fairly generous-sized grid,  this new combat system offers a surprisingly tactical turn-based experience. With some characters attacking diagonally, others utilizing ranged abilities and many fights even littered with moving environmental hazards, The Fractured But Whole’s combat always keeps players on their toes.

In a nice touch, a handful of battles in the game mix things up further by introducing special objectives. For these cool little fights, instead of simply defeating a bunch of sixth graders or say, humiliating Kyle’s cousin, victory requires a (usually) refreshing and sometimes hilarious win condition. Whether its making it out of a strip club alive, or lighting massive piles of weed on fire, these little touches add a bit of South Park-flavored fun to what can otherwise be quite similar-feeling battles.

This is where our problem with The Fractured But Whole rears its ugly rectum. While The Stick Of Truth’s combat dragged, overall the game felt like an interlinked series of top quality South Park episodes. Unfortunately, though, The Fractured But Whole sadly feels less consistent. Coming in at around double the length of its predecessor, it’s not hard to see why.

While new developer Ubisoft San Fransisco has clearly put a lot of effort into making a battle system that feels consistently compelling, its difficult not to feel like the marriage of South Park and RPG is more forced this time around. With the game clocking in at well over 20 hours, these moments just feel disappointingly fleeting. Thanks to an overly bloated tutorial and a few repetitive (but almost mandatory to level up) side quests, some sections of the game reveal a very evident clash between the writers’ desire to stay true to the show and the developer’s desire to make the game a decent length.

Is South Park: The Fractured But Whole Any Good?

Yet, despite these complaints, The Fractured But Whole is still undoubtedly one of the funniest video games ever made. Packed full of more hilarious moments than most gaming franchises manage in a decade and boasting a surprisingly deep combat system, this is undeniably a great little game.

It’s a shame that a focus on quantity rather than quality means The Fractured But Whole’s writing doesn’t quite reach the giddy highs of its predecessor, but for those looking for a grin-inducing gaming experience, this sequel still delivers in spades.