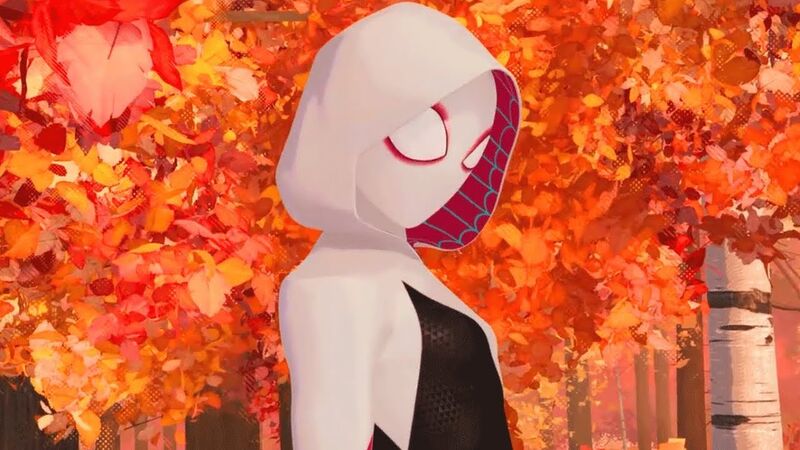 Spider-Man: Into the Spider-Verse throws together a whole team of Spider-People from different dimensions as they fight to save reality itself from collapsing. One of the most distinctive characters in the film sports a striking white, black and pink costume; Spider-Gwen… A.K.A Gwen Stacy. Except this version of Peter Parker’s high-school girlfriend wasn’t killed by the Green Goblin. Let’s get into what you need to know about Spider-Gwen.

The History of Spider-Gwen

Debuting in Edge of Spider-Verse #2, Spider-Gwen was an instant hit with fans. The much loved character quickly received her own solo series taking us through her adventures on Earth-65. The history of the Marvel universe is a little different there than main 616 universe, but still has some similarities. Instead of Peter Parker, the radioactive spider bit Gwen Stacy. She uses her spider-powers to fight crime, stop supervillains and occasionally save the universe. But in a twisted parallel of Gwen’s own fate in the 616 universe, it’s Peter who tragically dies in the beginning of her superhero career.

On Earth-65, Peter is constantly hounded by bullies who make his life completely miserable. Instead of channelling his anger into fighting crime, he begins experimenting on himself – eventually becoming a version of The Lizard. But one of the chemicals he uses has a horrific effect on his body, killing him at the end of his fight with Gwen. The entire city calls for the vigilante to be apprehended, blaming her for killing Peter.

We all know what happens when someone’s bitten by a radioactive spider! A visit to the hospital and some antibiotics. Unless you’re in the Marvel Universe that is – then you grab a costume and begin crime-fighting. After the bite, Gwen had most of the same abilities as your typical Spider-Hero; wall-crawling, superhuman strength, superhuman speed and superhuman reflexes. Also, since she’s the daughter of a Police Captain, George Stacy, she’s picked up her fair share of investigative abilities. Just in case Spider-Gwen wasn’t cool enough as it is, she’s also the drummer in her band; The Mary Janes.

Her costume is radically different to the other alternate Spider-Heroes that we’ve met during Spider-Verse and beyond. The suit’s shoulders and chest are white, with a pointed black design stretching from her torso to her legs. The best part of the suit is undoubtedly the hood that sits over her mask. It has a pink webbed design on the inside that matches the pink outline of her mask’s lenses. It looks fantastic. Plus, have you noticed the green ballet shoes on Into the Spider-Verse’s Gwen? Nice touch.

The Importance of Spider-Verse and Spider-Geddon

She was one of the many Spider-Totems recruited by Spider-UK to fight off Morlun and the Inheritors during the Spider-Verse event back in 2014. Morlun and his family basically wanted to eat anyone with Spider powers, how romantic. But the 616 version of Peter Parker didn’t want to use her in the fight, having already felt the heartbreak of losing Gwen once already. Ultimately, he realized that she was an incredibly talented hero and that they needed her help. The pair agree to keep an eye on one another, since they’ve both lost their own respective Peter and Gwen. In the series, Gwen teamed up with a number of other heroes like Spider-Ham, Spider-UK and Spider-Noir. After the Spider-Verse storyline, Miles Morales and Spider-Gwen had a brief relationship that started in Spider-Man #12. Seeing the pair as a couple in their respective costumes is incredibly sweet. Could that be in their animated future?

When the Inheritors returned during 2018’s Spider-Geddon, Gwen has to stand up against a former ally to ensure the villains can’t threaten the existence of reality again. She and the rest of the Spider-Totems try and talk Superior Octopus into destroying his cloning facility, because the Inheritors are looking to use it to stay immortal. This is the version of Otto Octavius that had swapped brains with Peter Parker before growing himself a new, younger body… Of course. Just an average day as a Spider-hero!

She’s Already Earned Herself A Spin-Off

Into The Spider-Verse was an immediate hit with the majority of critics after press screenings, and Sony are incredibly confident with this new animated direction for their Spider-Franchise. The film has already been given a direct Spider-Verse sequel and another spin-off before the general release date. So, what’s that going to give us?

It seems like we’re getting an all female Spider-Team taking on the universe. While there aren’t any specific plot details, the rumor is that Gwen will be joined by Spider-Woman, Spider-Girl, Madame Web and Silk on the big screen. The spin-off will have a screenplay from Ben Hek while being produced by Amy Pascal. It’s also presumed that Phil Lord and Christopher Miller will be involved somehow… they produced Into the Spider-Verse after all.

Spider-Man: Into The Spider-Verse swings into theaters on December 14.