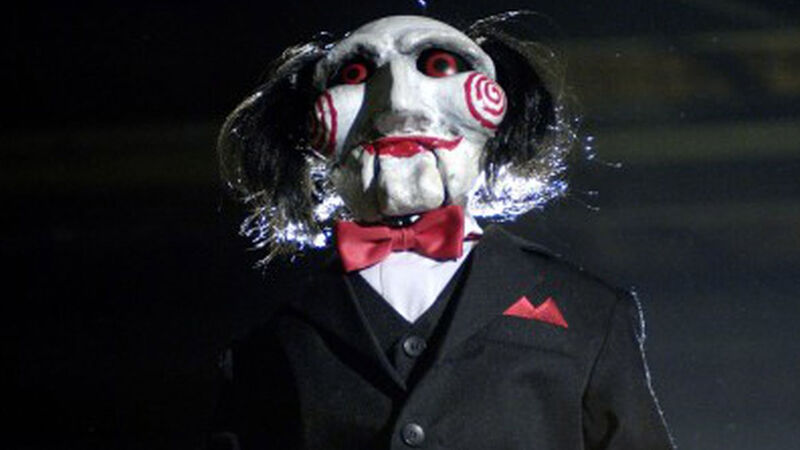 After eight movies, and with notorious trap master John Kramer, AKA Jigsaw, being dead and gone (but not too gone) for over half of them, you’d think there wasn’t any gas left in the tank for the Saw saga. But then Saw mega-fan Chris Rock approached Lionsgate with a whole new story idea, a way back into the franchise, and now Spiral: From the Book of Saw is about to land in our laps.

To prepare us all that might awaits us in this new Saw installment, which stars Rock and Samuel L. Jackson, we’re playing the role of Jigsaw here and digging up some past sins and sinister elements from the long-running series. Saw movies not only have their own grimy look, devious design, and iconic theme music, but they have a handful of telltale twists that have become a harrowing hallmark for the series.

From dead bodies not being dead to time itself not playing by the normal rules, here are five terrifying traits that let you know you’re definitely in a Saw movie… (suffice to say, the first eight Saw movies are spoiled below!)

Jigsaw is a mindful maniac whose main goal is to give the wretched souls of this world a second chance at life. To win back their right to exist, hopefully reborn with a newfound appreciation for everything, these sinners are kidnapped and forced to do something horrible to themselves, or others, so that they might emerge on the other sign refreshed and rehabilitated (missing blood and parts, usually).

Only a few people can get on Jigsaw’s wavelength right away though. Either via cassette tape or video, and using Billy the Puppet as his proxy face, Jigsaw will bury important information in his game instructions, often via wordplay. In the first Saw movie, he tells Dr. Gordon to “follow your heart.” Dr. Gordon and Adam were able to then connect that phrase to a heart drawn on top of a toilet tank and unearth some items for their game.

Other players haven’t been as lucid or astute, however. For example, the gang in Saw II could have all cooperated and figured out that “the numbers are in the back of your mind” meant that the combination digits were etched on the back of everyone’s neck and then escaped relatively unscathed. Most infamously though, the blunder’s row in Saw V, known as the Fatal Five, were very clearly told “today, five will become one with the common goal of survival.” Meaning each test gave everyone an opportunity to survive if they worked together, except this quintet’s inherent selfishness doomed them and in the end the remaining two had to go through even more suffering because the final bloodletting crucible required five people to guarantee making it through.

Even in the eighth movie in the series, 2017’s Jigsaw, the titular trapster told two players that the “key” to their survival lay within a shotgun and a single shell. And that was to be taken literally, as the key was in the shell. If the shell was fired, the key would be destroyed and the players would be doomed. Did they crack this code and heed the warning? Of freakin’ course not!

One of the most famous go-to twists for Saw films involves the passing of the torch. What began as a devious bit of deception in Saw II — the reveal that original Saw movie survivor Amanda, who’d lived through her reverse beartrap test in the first movie, was now a disciple of Jigsaw — would become a stalwart staple. We’d come to find out, as the movies piled up and the need for shocking swerves grew, that she wasn’t the only one Jigsaw had earmarked as a successor.

As the series’ main madman, it’s unique among horror franchises that Jigsaw arrived to us with a terminal diagnosis and no supernatural way out. From the first movie, he wasn’t created to last. And that gave him an extra mission. On top of setting up elaborate tests for lowlifes, he had to make sure there’d be someone to carry on his work after his death. And, as ridiculous as it became for the series, with the unveiling of so many alternate Jigsaws, it made sense that John Kramer – the O.G. Jigsaw – would want to cover his bases and pick more than one person to follow in his footsteps. Since, you know, these were unsavory characters to begin with and might not turn out to be the most apt pupils.

After Amanda, Saw IV and V would reveal that Amanda wasn’t the only student of the game, as it turned out Jigsaw roped/forced crooked cop Mark Hoffman into being his henchman. Much later, in the seventh film, Saw: The Final Chapter (AKA Saw 3D), we’d find out that Dr. Gordon never died offscreen in the first movie, as was much-debated, and had stuck around to be the ultimate Jigsaw apprentice. Then, in 2017’s Jigsaw, there was yet another Jigsaw trainee we never knew about, a medical examiner named Logan, who’d been brought into the fold very early on and kept secret, presumably, from everyone else. Will Spiral unleash yet another Jigsaw worshipper on the world? We’ll have to wait and see, even as we look suspiciously at, well, everyone in Chris Rock’s vicinity.

This is a big one, which amounts to narrative format manipulation for the sake of outwitting the audience. The secret apprentices came as a shock to viewers but also to other characters in the movie who never knew one of their own was a stealth Jigsaw. The timeline trickery tends to be just for fans, though the very first time we saw it, it’s worth noting it also affected one of the characters.

Another huge twist introduced in Saw II, on top of Amanda being in on the entire house of traps, was this concept of “what you’re seeing isn’t taking place when you think it is.” In Saw II, this worked to fool both viewers and Detective Eric Matthews, ultimately becoming his undoing as he didn’t realize he was watching a game play out on monitors (with his son as one of the participants) that had already occurred, rather than was happening live, as he had believed. Later on, the series would revisit this trick, though it would now mostly just be to hoodwink us unsuspecting Saw stans.

In Saw IV, we’d find out that the entire story, aside from the few minutes of Jigsaw autopsy at the start, was taking place at the same time as Saw III. In 2017’s Jigsaw, this idea was brought back in a huge way, hitting us with the double-trouble time warp/secret apprentice twist that hadn’t been used since Saw II and IV, wherein the entire Jigsaw test, using five people, that we were watching thoughout the film actually took place years earlier. To try and hide this from suspicious Saw fans, secret apprentice Logan was leaving real life corpses around in the modern day world in order to emulate the way people died in his own previous test, helping to make us think it was all happening in the present.

Though perhaps not as oft-used as some of the other examples on this list, this one is still worth looking out for. Another ruse that Jigsaw brought back is actually the franchise’s first big shock ever: the dead man is not dead. That first movie’s ending, despite being one of the saga’s more straight forward and less convoluted slices of smoke and mirrors, is arguably the best twist of the entire run – revealing that the corpse on the floor in the middle of Dr. Gordon and Adam’s test was actually Jigsaw/John Kramer the entire time. He’d faked a gunshot wound to the head with prosthetics and was actually inside the bathroom with them with a front row seat to their test. His slow rise to his feet at the end of the film, standing tall in front of Adam, who’d now be chained in that room until his death, was a big thrill that helped make the series a standout.

Also in the first movie, in a separate scenario, as part of Amanda’s test she was instructed to retrieve a key from a dead cellmate – only to find out that the guy was actually alive and she’d have to gut him anyway. So the movie was sort of tipping its hat to the ending a little, giving us a dude who was supposed to be deceased and then turned out not to be.

Over a decade later, Jigsaw would return to this idea, of the mystery “dead” man, showing us a big testing ground, with five people, one of whom was passed out. And then, because he woke up too late to save himself, he’s supposedly killed by the first test. Everyone is helmeted so we couldn’t see who this guy was but at the film’s conclusion, it would turn out to be Logan (the test was actually in the past, of course), as we learned that he survived after John Kramer had a change of heart and took Logan under his wing.

Whose Test Is This Anyway?

Every creative mind gets bored, so for Jigsaw to start layering tests upon tests… it makes sense. Also, with time running out, he needed to make sure some of his apprentices were on the up and up and worthy of taking over the mantle after his time ran out. One of the big “gotcha” moments in Saw III was that Jeff’s massive multi-level test, and also Lynn’s predicament, was actually truly Amanda’s test. Jigsaw was trying to see if Amanda was willing to let people survive after they completed their brutal game. Fair is fair, after all, and Amanda wanted to be the only survivor. She wasn’t following the all-important Jigsaw code.

We’d revisit this, in a tweaked and twisted way, in Saw VI, when we’d find out that smarmy health insurance deniar William, whose multi-leveled test ran the length of the film, was coming face to face with not his own family, but the family of a man who died thanks to William’s cruel refusal to help him get insurance. Now they’d get to decide, after all William had been through, if William should live or die. They’d choose the latter. Because Saw.

Also at the end of Saw VI, in keeping with the tradition of Jigsaw’s less than stellar apprentices being tested themselves, Hoffman was placed in the infamous reverse beartrap by his former master’s widow, Jill. As it turned it, it was one of Jigsaw’s dying wishes not only to put William in his game but that Hoffman be tested as well. His crime? Aside from just being meathead Hoffman? Well, instead of telling Jigsaw that co-apprentice Amanda had inadvertently caused the death of Jill and Jigsaw’s unborn son, he decided to blackmail her instead. Much like Hoffman and Amanda before her, Jill decided to make the test unwinnable, leaving Hoffman to die. Though ultimately, and unfortunately for Jill, he still managed to Hoffman his way out of it… only to finally be undone by, of course, another secret apprentice — Dr. Gordon — he himself had no knowledge of.

We’ll see which of these tried and true Saw touchstones return when Spiral: From the Book of Saw opens May 14.