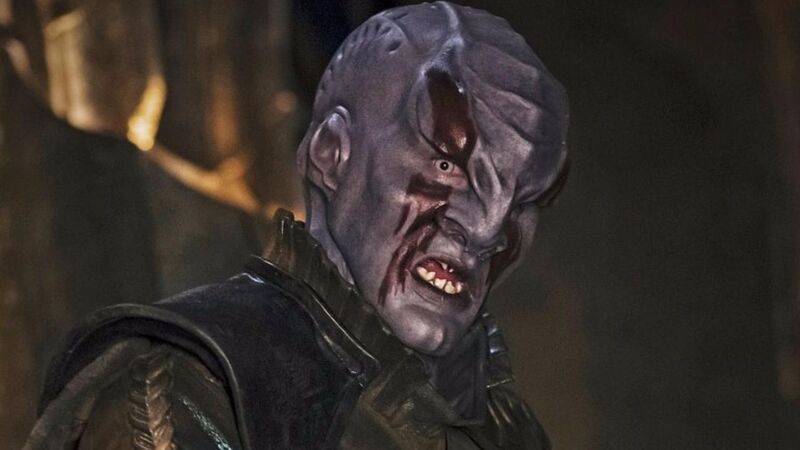 The ‘Star Trek: Discovery’ Klingons Are the Best in the Franchise

Star Trek: Discovery’s first season is now in the rearview. It was, perhaps, the best debut season of any Star Trek show, but also the most controversial. One of the biggest debates the series has sparked is over the changes made to the Klingons, both in their design and aesthetic and in their attitudes and actions. With season two set to continue the Klingon storyline, I want to throw out a bold take: on Discovery, the Klingons are the best they’ve ever been.

The Design Is Great

Let’s get one thing out of the way: complaining about the cosmetic changes to the Klingons is a waste of time. It is true that Discovery’s Klingons are a bit of a departure from the ones we saw throughout the 1990s and 2000s. They’re bald and beardless, with enlarged skulls and purple-grey skin. But no Star Trek race has undergone as many changes as the Klingons. They started out without ridges, and were updated for The Motion Picture in 1979. They went through another transformation for The Search for Spock in 1984, and again for Into Darkness in 2013. There are in-canon explanations for the retcon, but the truth is that they were updated based on whims of the creators. And that’s fine.

It may not be everyone’s cup of tea, but there’s no denying that the new design makes the warrior race look alien and fierce while retaining an element of relatability. Most crucially, it gives them an air of verisimilitude that previous designs could not. These are the first Klingons ever that don’t look like humans wearing rubber masks, but instead like true extraterrestrials. That fits the show’s theme of struggling to find common ground with an enemy. If they looked like the old Klingons, the audience would never see them as a threat.

Previous iterations of Star Trek have thoroughly documented Klingon religion. We know all about the life and teachings of their messiah, Kahless, about Sto-vo-kor and Gre’thor, their versions of heaven and hell, and their code of honour. Yet, depth is different from diversity. Star Trek has always been guilty of too much homogeneity in its races, and Klingon culture has always seemed a bit one-note: a race of warrior-poets with a code of honour, drinking and fighting their way across space.

Discovery opens with T’Kuvma espousing his xenophobic philosophy. He criticises the Klingon ruling class for turning away from the true teachings of Kahless. His followers call him “the Unforgettable” (a title previously reserved for Kahless himself). His martyrdom fuels the Klingon appetite for blood.

While Star Trek has flirted with the idea of restoring the proper teachings of Kahless before, this is the first time we see a Klingon religious leader who can compete with “the Unforgettable” Klingon prophet in the eyes of his followers. T’Kuvma becomes a kind of Klingon Martin Luther — the leader of a reformation that some embrace, others reject, and who triggers a tumultuous change within a community.

But Discovery doesn’t stop there. In the mirror universe, Voq’s counterpart provides a theological justification for cooperating with other races. He inverts the logic of T’Kuvma’s nativism but remains Klingon. The explanation offers a glimpse into the competing philosophies at play within Klingon society. And in the season finale, Ash Tyler identifies some Klingons on Qo’noS as followers of Molor. Molor is the tyrant whom Kahless overthrows to unite the Klingon people. It’s the first time we’ve seen modern Klingons who reject Kahless as their saviour. What’s more, they do it in the open, seemingly free from persecution. It would be wise for the Discovery writers to continue adding such complexity to Klingon culture.

A Way to Reconcile Inconsistencies

Discovery’s showrunners promise that they will explain canon violations in Season 2, including the Klingon redesign. They aren’t obliged to do that, but if they do, there are some older issues they can fix as well.

Chief among them: if Klingons value honour, why do the Klingons in the original series act so dishonourably? Fans rarely complain about this, but it’s bizarre. Kor massacres defenseless civilians on Organia (although they are later revealed to be immortal energy beings, and are unharmed). Krell engages in a Vietnam-esque proxy war, dealing weapons to a primitive civilization. Koloth is likely aware of the plot to poison the grain on Sherman’s Planet and goes along with it. The Klingons assassinate the High Teer of Capella IV and try to do the same to the Dohlman of Elas. Of the Klingons on the original series, only Kang shows a shred of honour — and even he has his men torture Chekov for no reason.

L’Rell’s ascendance to the leadership of the empire, however, could provide an explanation. L’Rell is a daughter of the House of Mo’Kai, described as “watchers”, “deceivers” and “weavers of lies”. Perhaps her influence is what leads to the Klingons of Kirk’s era acting so treacherously? Alternatively, perhaps her efforts to unify the warring houses fail so spectacularly that Klingons turn their back on Kahless’s teachings for a generation.

If the writers really want to be bold, such a failure could also explain why, ten years after Discovery, only ridge-less Klingons make up their defense force. Perhaps L’Rell is deposed and the balance of power is upended in favour of this stigmatized group. The possibilities are endless, but Discovery has a real opportunity to clarify an exciting chapter in Klingon history.

You don’t have to love the new Klingons. Many fans still don’t. But it’s hard to deny that Discovery has added new and interesting details to the story of an alien race we thought we knew. The Klingons are one of the oldest races in Star Trek, dating back to Season 1 of the original series. The only species that is perhaps more iconic and well-known are the Vulcans. That Discovery can keep the Klingons fresh and fascinating while honouring what went before, is an incredible achievement. Let’s hope Season 2 keeps up the momentum.

Season 1 of Star Trek: Discovery is now streaming in its entirety on CBS All Access in the United States, on Space.ca in Canada, and on Netflix internationally.