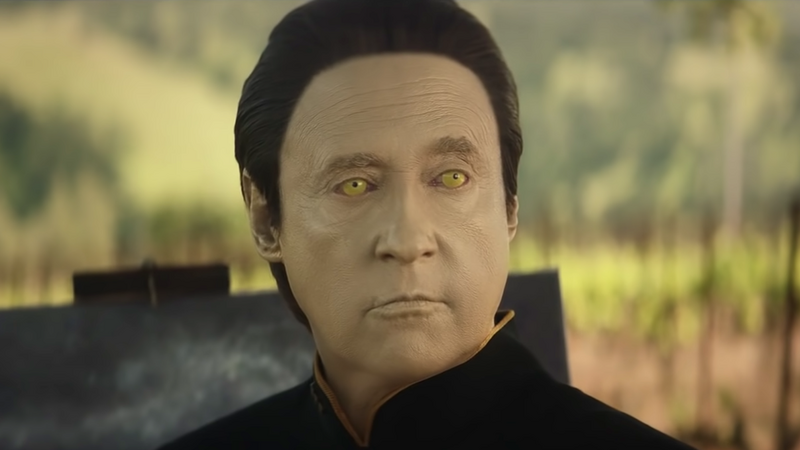 How ‘Star Trek: Picard’ Paid off Data’s ‘Next Generation’ Storylines

SPOILER WARNING! Full spoilers for the finale for Star Trek: Picard Season 1 below.

In the ensemble of every Star Trek series, there’s typically one character whose unique background allows the show to explore and challenge what we understand about humanity: In The Original Series, it’s Spock (Leonard Nimoy); in Deep Space Nine, it’s Odo (René Auberjonois).

Perhaps the most emblematic of this character type, though, is Data (Brent Spiner), a self-aware android, who, after being introduced in Star Trek: The Next Generation, has persisted as a key part of the Trek universe for over 30 years, most recently appearing in the Season 1 finale for Star Trek: Picard.

If you go back to creator Gene Roddenberry’s initial 1987 story bible, Data’s backstory differs from what would become established canon — rather than being created by Dr. Noonian Soong, he was “manufactured by highly advanced (and never seen) aliens.”

But the core drive of the character is consistent: “he is a machine who is eager and enthusiastic about the adventure of life. To that end, he is an inquiry into the question, ‘What does it mean to be a human being?'” Over the course of his history, many of Data’s storylines focused on that question — including what might now be his very last appearance.

Data Wants to Be Human

From the earliest days of TNG, Data was meant to serve as a Pinocchio-esque figure. In fact, one of his first scenes in the TNG pilot, “Encounter at Farpoint,” makes this pretty explicit, as he and Riker (Jonathan Frakes) discuss:

RIKER: Your file says that you’re a…

DATA: …Machine. Correct, sir. Does that trouble you?

RIKER: To be honest, yes, a little.

RIKER: Now that does trouble me. Do you consider yourself superior to us?

DATA: I am superior, sir, in many ways, but I would gladly give it up to be human.

RIKER: Nice to meet you, Pinocchio. A joke.

Sure enough, over the following seven seasons, Data would regularly seek out experiences that he felt would help him understand his friends and crewmates better. There were the little things, like learning how to dance, teaching himself how to sneeze and adopting a cat named Spot. Then, there were bigger choices, like creating a cybernetic daughter named Lal (who tragically passed away shortly after her creation), Data’s existence was packed full of moments that anyone would consider an important part of a full and rich life. (Heck, in only the third episode of the series, he proved that he was, ahem, “fully functional.”)

All of it came down to his core desire to embrace the best aspects of being alive — while being very conscious of the fact that he wasn’t.

Not Quite Human, But…

There was, however, always the unanswered question of how human he could actually — or should actually — want to be. This was perhaps best seen in Star Trek: First Contact, when he was pulled back and forth between his desire to be human and his cybernetic nature, a conflict largely triggered by the Borg Queen (Alice Krige), who offered him the opportunity for sensation well beyond anything his newly installed emotion chip (easily turned off) could provide.

It was, he admits at the end of the film, a situation which caused him pause. “She brought me closer to humanity than I ever thought possible. And for a time, I was tempted by her offer,” he tells Captain Picard (Patrick Stewart).

When asked how long “a time” that might have been, Data’s answer: “0.68 seconds sir. For an android, that is nearly an eternity.”

Just because Data is an android, though, doesn’t mean he’s less alive. The real answer to Data’s existence was revealed by Next Gen in the classic Season 2 episode “The Measure of a Man,” a courtroom drama in which the question of whether or not Data is a sentient life form, or the property of Starfleet, is raised.

While Riker, asked to serve as the prosecution, makes some good points about how Data’s nature differentiates him from biological life, it’s Picard, arguing in Data’s defense, who delivers the winning line: “Your Honor, Starfleet was founded to seek out new life. Well, there it sits.”

Picard wins the trial, and Data lives on… until tragedy, followed by an unexpected coda, unfolds.

What could be the final chapter of Data’s tale arrives rather unexpectedly 18 years after Star Trek: Nemesis, in which he bravely sacrificed his life for Picard’s.

But before he did so, he had downloaded his lifetime of memories up until that point (that part there is key) into a more primitive model known as B-4. In the first episode of Picard, we learned B-4 was eventually disassembled, but more about Data himself would be saved for the season finale. In “Et in Arcadia Ego, Part 2,” Picard sacrifices himself for a newly discovered colony of synthetic beings. Upon dying, Picard finds himself not in a dream, but in a “massively complex quantum simulation,” as Data appears to explain.

Picard has been haunted by dreams of Data since Data’s death, and is grateful to finally tell his dear friend how much he loves him. But Data is there to deliver some good news: Picard’s mind has been saved, and a new synthetic body is waiting for him. Picard has now experienced death but has a new chance at life.

Data, however, doesn’t remember his own sacrifice, because the construct speaking to Picard in the simulation is based on the memories saved on B-4. The android who wanted to be a real man has no idea what it is like to experience the final defining moment of human life — its end.

Thus, before Picard leaves, Data asks a favor: that he “terminate my consciousness.” It’s not that Data wants to die, though, but rather that he wants “to live, however briefly, knowing that my life is finite… Mortality gives meaning.”

It’s a request Picard grants, literally unplugging Data in the real world while, in the simulation, Data’s face transforms into wonder. Then, he fades away into stardust, his hand being held by his captain and friend.

While understanding what it means to be alive is a journey that might take most of us our entire lives, in Data we see a character who represents all the very best aspects of that journey, embracing every aspect for the gift that it is — even its bittersweet ending, making us grateful to have even been on the journey at all.