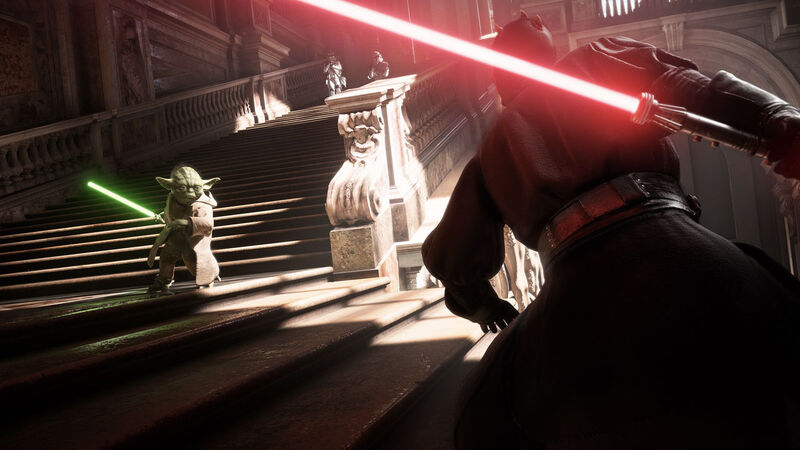 Like pretty much everyone else in the world, we’re huge Star Wars nerds here at FANDOM. With the last two movies restoring everyone’s favourite space fantasy to its former glory, when it comes to Star Wars in our other favourite medium, video games, the brand has been significantly lacking in the force recently. But hopefully Star Wars Battlefront II is about to change that.

Despite Star Wars fitting video games more snuggly than Vader’s gloves, incredibly the last six years has only seen two licensed game hitting consoles. The most notable of those two releases, of course, was 2015’s Battlefront. Developed by the Swedish shooting maestros behind the hugely popular Battlefield series – DICE – Battlefront looked to be a gamer’s Star Wars dreams come true.

Unfortunately though, when the anticipated game finally hit the shelves, it left many fans feeling a little disappointed. While stunningly rendered visuals and audio from the original films delivered a game that looked and sounded uncannily like Star Wars, an overly simplistic multiplayer mode and the complete lack of a story left many gamers wanting more. Thankfully, after sitting down with the Star Wars Battlefront II E3 preview it looks like EA is more than making up for it with this ambitious sequel.

When the last game was released, Battlefront players everywhere (including The Force Awakens’ own Jon Boyega) expressed their disappointment at the game’s lack of a single player Star Wars adventure. With Battlefront 2, however, we were relieved to see that not only does the game feature a fully playable campaign, but its story also looks to fill in a few of the franchise’s gaps. Set in between Return of the Jedi and The Force Awakens, EA’s latest gives players a welcome taste of the dark side, putting them in the shoes of decorated Imperial soldier – Iden Versio.

The first thing that struck us about the game’s campaign was just how good the cutscenes looked. As Iden walked apprehensively across the deck of a beautifully rendered Star Destroyer, brilliant facial capture tech meant that we could really see the emotion on her face. Following the destruction of the Death Star, Iden is ordered to carry out the last ever wishes of the dead Emperor – a plan called Operation Cinder.

Before she can find out any more about Palpatine’s fail-safe mission, however, a surprise Rebel attack sees her jumping into a TIE Fighter. The segues between each cutscene and the resulting gameplay were brilliant, with a switch to a cinematic first person view showing Iden climbing into the cockpit and then seamlessly transitioning into space-fighting gameplay.

After crash landing on the Rebel fleet’s capital ship, the mission saw Iden hopping out of her fighter and engaging in some typical boots on the ground Battlefront combat. The gameplay here felt enjoyable, if overly familiar, but didn’t quite seem to match the grandiose quality of its cutscenes.

Multiplayer is better than ever

Interestingly, where Battlefront 2’s  gameplay did feel suitably cinematic was in the series revamped online multiplayer. Taking control of the Federation’s droid army, a new mode called Galactic Assault saw us bringing the fight to Naboo’s city of Theed. Here,  it seems like DICE has taken a healthy bit of inspiration from its other shooting series, Battlefield. In the Rush-esque Galactic Assault, teams are tasked with either attacking or defending as they advance through the map, completing different objectives. As we allied with our teammates to attempt to storm the city, we form into a squad, watching each other’s backs in a tight-knit formation.

The task was to destroy the enemy’s mounted guns and escort our troop carrier to the palace door. With blaster fire raining down on us from all angles, the mode felt far more cinematic than the arcadey gameplay of the last game. Thanks to the introduction of four customizable classes, we were pleasantly surprised at how much more in depth and team-focused each match felt.

Here, the Officer is your standard support class, Assault is your best bet for medium range gunning, the Heavy is… well, the heavy weapons class, and the Specialist is what you spawn as for all your sniping needs. Each has their own unique abilities, ranging from placing sentry turrets to healing, meaning that playing as different classes changes how you approach each situation.

In a nice touch, battle tokens have been replaced by Battle points, meaning that making strong plays will give you the option to spawn as hero characters and different vehicles. They’re going to be much more accessible than they were in the last Battlefront.

Is Star Wars Battlefront II going to be good?

From what we’ve seen so far, the addition of squads, character classes and infinitely improved shooting means that Battlefront 2 is shaping up to be a far more satisfying and in-depth multiplayer experience than its predecessor. We were impressed with just how Star Wars the campaign felt too, and we can’t wait to jump back in and finally learn discover what happened after the battle of Endor.