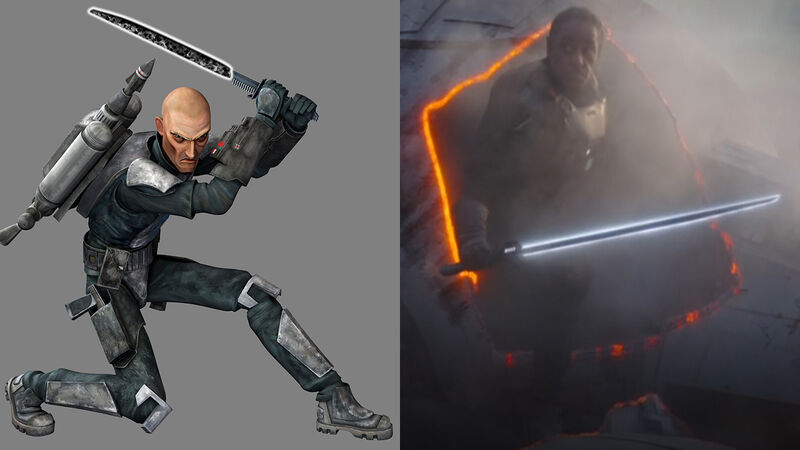 Star Wars: The History of the Darksaber

As Star Wars moves away from the Skywalker Saga that anchored the franchise since its inception, Lucasfilm has been dropping hints about what part of a galaxy far, far away fans can expect to spend time in next. In January of 2021, the next phase will begin. Audiences will be transported 200 years before the events of the Skywalker Saga; to the age of the High Republic.

But that doesn’t mean Lucasfilm will abandon the current timeline or that the High Republic will be a self-contained era. After all, quite a few beloved characters were alive for the entire breadth of Star Wars’ narrative. Events happening in the past will no doubt be tied to the present. For proof of that, you have to look no further than the mysterious Darksaber.

Whether you were first introduced to this one-of-a-kind weapon years ago or only learned about it after its appearance in The Mandalorian, the Darksaber is unforgettable. In anticipation of its return — and hopeful plot relevance — in Season 2 of The Mandalorian, let’s take a look at what this weapon is, why it’s special, and visit a theory on where it might have come from.

Making its first appearance in the animated series Star Wars: The Clone Wars, at first glance the Darksaber appears to be the antithesis of the lightsaber. The blade is pure darkness, laced with crackling white lightning. It emerges from its hilt in a flattened, angled blade reminiscent of European swords wielded by earthbound knights, in contrast to the rounded softness of a lightsaber. Notably, it has been wielded by those who are neither Jedi nor Sith. Everything about the Darksaber signifies that it is a unique and important weapon.

Since the Darksaber was introduced in the Clone Wars episode “The Mandalore Plot” and subsequent episodes of that series, it has appeared in the animated Star Wars Rebels, as well as making its much-talked-about appearance in The Mandalorian. Each time fans learned a little bit more about it. The Darksaber is a critical part of Mandalorian culture. It was utilized in the transfer of power, with House Vizsla wielding it as the ruling family of Mandalore. At one point, the Jedi stole the weapon, perhaps because they knew that while anyone can wield the Darksaber, only those with a strong will can maintain control over it. Somehow the Darksaber responds to the emotional state of its wielder, growing in size and becoming wild with electrical activity as the handler becomes more agitated. The blade emitter is in the shape of a slit, not a circle. A variant only seen one other time; in concept art for the blade of Darth Bane that was never used.

THERE AND BACK AGAIN

According to Mandalorian lore, the Darksaber was forged over one-thousand years ago by a Mandalorian named Tarre Vizsla. Vizsla holds a unique place in the history of the Star Wars galaxy as the first Mandalorian ever inducted into the Jedi Order. As of this writing, he was also the last. While the details have yet to be revealed, we know that Tarre Vizsla also became the first ruler of a unified Mandalore. It would appear he had a falling out with the Jedi Order as it would be against their way of life for Tarre Vizsla to establish a kingdom. That would further explain why the Jedi stole the Darksaber upon Tarre Vizsla’s death. If they believed the Darksaber was dangerous, the Order would not be above stealing. Especially since the weapon is one-of-a-kind, even among lightsabers. However, at some point, House Vizsla stole it back. The tale has become part of Mandalorian cultural legend.

The Darksaber remained in the custody of House Vizsla up until the Clone Wars. In an attempt to overthrow the new, pacifist Mandalorian government, Pre Vizsla and his Death Watch insurgents were rebuffed but not entirely defeated. Determined not to fail a second time, Pre Vizsla and his people found unlikely allies floating through space: Maul and Savage Opress. With their help, Death Watch successfully overthrew the Mandalorian government and installed Pre Vizsla as the new leader. With the Darksaber by his side, it seemed a return to the old ways.

But Pre Vizsla made one crucial mistake: he double-crossed a former Sith. No one makes that mistake twice…because they’re dead. After a gruesome duel, Maul dispatched Pre Vizsla and took up both the Darksaber and leadership of Mandalore. Flush with newfound power, Maul would use the Darksaber to murder the pacifist Mandalorian leader — Duchess Satine — in front of her former lover, Obi-Wan Kenobi.

Maul’s meddling in the Grand Plan, however, drew the attention of Darth Sidious. In the ensuing battle, the Darksaber was lost to Maul temporarily, though upon his escape from the Sith Lord, it was returned to him by his loyal minions. Maul would keep the Darksaber with him for years, even after constructing another red lightsaber for himself. It was still in his possession when the crew of Star Wars Rebels entered into an uneasy alliance with the  Machiavellian Dathomirian. Notably, Maul did not use the Darksaber, even when fighting Ahsoka Tano or the crew of the Ghost, leading one to wonder if the rage Maul felt kept him from being able to master the weapon. During an opportune moment, Mandalorian Rebel Sabine Wren stole the Darksaber back for her people.

What followed was a painful journey for Sabine as she confronted her past sins and learned to control the power of the Darksaber. She used the weapon to save her mother from an assassination attempt, to rescue her father and other resistance fighters from prison, and during the climactic battle in the Mandalorian civil war. By the end of Star Wars Rebels, Sabine had gifted the blade to Bo-Katan, sister of the deceased Duchess Satine and new de facto ruler of Mandalore.

After that, the Darksaber disappears from current stories in the timeline until it reemerges in The Mandalorian, now in the possession of Grand Moff Gideon. He most likely acquired it during an off-screen event known as the Great Purge that virtually — or perhaps even literally — destroyed Mandalore. At this point, Occam’s Razor suggests Gideon took the Darksaber from Bo-Katan, either after her imprisonment or death. But there’s nothing definitive yet on the story of how the Darksaber fell into the hands of an Imperial leader.

Now that the history and importance of the Darksaber have been laid out, how does this connect with the High Republic? One word: Revan.

For those who don’t spend their days immersed in the lore of Star Wars, Revan is a character much like Thrawn or Mara Jade. One created for the Expanded Universe who then became a cult fan favorite. In the case of Revan, he was first introduced in the Bioware game Star Wars: Knights Of The Old Republic. But he would grow to become one of the most influential historical figures in the lore, somewhere between a demon and a demigod. Revan began life as a Jedi, before falling to the dark side and becoming a Sith, only to claw his way back out and return to the light side. Balance. At one point, his soul was split in twain by having held both sides of the Force. He was a critical player in the Mandalorian Wars, with some players choosing to see him as a native Mandalorian (though his home world is never revealed).

Of course, all of this was before the acquisition by Disney. But traces of Revan have shown up from the beginning of Disney’s tenure. Kylo Ren’s entire look is lifted almost entirely from Darth Revan’s aesthetic. Then, the Star Wars: The Rise Of Skywalker: The Visual Dictionary was released in 2019 and Revan entered the official canon once again. As a throwaway line hidden near the back of the book. Darth Sidious named the Sith Eternal’s 3rd Legion after the infamous Sith Lord known as Darth Revan. While that could just be an Easter Egg thrown in for fans, Lucasfilm has left other breadcrumbs to indicate Revan, like Thrawn before him (and hopefully Mara Jade eventually), is about to return to the stage. Revan, and other famous characters from that period such as Bastila Shan and Darth Nihilus, are the only Legends characters to have appeared in official Star Wars games. Revan has also recently received an official Black Series action figure and high-end Force FX Elite lightsaber with Revan’s purple blade. Maybe Lucasfilm just likes money…or maybe they’re quietly boosting Revan’s visibility.

Now, why does this matter? Star Wars: The Rise Of Skywalker was heavily influenced by the lore from Revan’s time period. How Palpatine survived the explosion of the Death Star in The Return Of The Jedi was basically lifted directly from the Emperor of the Sith during Revan’s life — Darth Vitiate. From the secret Sith Empire to the ability to hold his essence together long enough to shove it into a new host body to the long-term political manipulations on a galactic scale, Vitiate’s fingerprints are all over Palpatine. Which would make sense if Palpatine’s assertion that he is “all the Sith” is literal; that the reason for the Rule of Two was to constantly have a new supply of powerful host bodies to possess. Yes, that’s correct. I believe Palpatine is Darth Bane and vice versa. A single entity body-skipping across time and space.

So let’s say Revan was from Mandalore. The original story had him, as a Jedi Knight, take up the cause of defending the Republic from the aggressive encroachment of the Mandalorians. After a long, bloody campaign, Revan succeeds in his mission by defeating the leader of Mandalore. With his dying breath, the opposition leader reveals Revan and the Jedi have been tricked; Vitiate had orchestrated the entire war, clouding the mind of the Mandalorian leader. All to test the military strength of the Republic to gauge if the secret Sith Empire would be able to defeat them. It was in searching for — and finding — this hidden Sith Empire that Revan would be seduced to the dark side of the Force. If he was from Mandalore, Revan’s justifiable rage at being manipulated into slaughtering his own people would be fertile ground for the Emperor to exploit.

Perhaps, like Ahsoka Tano’s white-bladed lightsabers, the Darksaber is a unique visualization of Revan’s unique life trajectory. Perhaps he is Tarre Vizsla. Perhaps he returned to Mandalore to fix what he had broken, disillusioned with the Jedi Order for not sensing a Sith manipulating the situation. This might also explain why the Mandalorians and the Jedi are ancient enemies. Perhaps the war that is often alluded to was the same war Revan fought in. If so, that would fit the High Republic timeline, which has squished the meandering and extensive Legends timeline into something easier to digest. That would easily explain away why Sabine said Tarre Vizsla lived a thousand years ago, instead of slightly over 200. At the time, Star Wars was still using the now out-dated dating system.

Of course, this is pure speculation. But the pieces fit. If the big reveal for the High Republic is that Revan will play a pivotal role, luckily we only have to wait a few more months to find out.