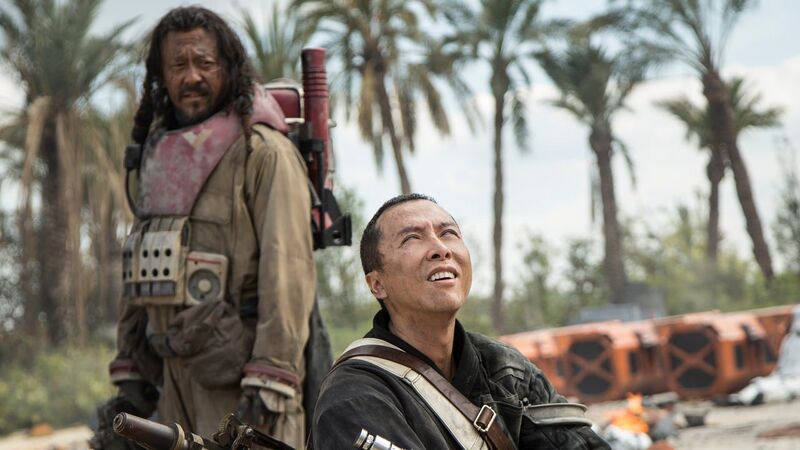 Star Wars: How the Force Got Its Mysterious Groove Back

When Lucasfilm hit the big, red “reset” button, it opened up the universe to redefine the nature of the Force. In the new canon, alternative Force traditions, new Force powers, revelations about lightsabers, and powerful beings have given us more mysteries to explore in the Star Wars universe.

The Mystery of The Force Becomes Clinical

The character who best expressed the mysterious nature of the Force in the prequel trilogy was Jar Jar Binks. When Qui-Gon Jinn says that they should trust in the Force to guide them through Naboo‘s treacherous waters, Jar Jar exclaims derisively, “Oh, maxi big, da Force.” A mystical energy field that controls our destiny? He doesn’t buy it. Neither did Han Solo. “Hokey religions and ancient weapons are no match for a good blaster at your side,” he famously quips in A New Hope. The average citizens of the Star Wars galaxy find the Force mysterious and often mythical.

The prequels shook up the mysterious nature of the Force by controversially introducing the concept of midi-chlorians. Seemingly, a Jedi with a blood sample kit, an iPhone, and a secure wifi connection can determine how strong someone is in the Force. Even powerful Yoda, whose wisdom inspired a generation of youngsters to do instead of try, was reduced to nothing more than a biometric. It seemed we were destined to be stuck with a new definition of the Force. One that could be understood scientifically, as even the prophesied Chosen One, so it was suggested, was nothing more than the product of an unwelcome in vitro fertilization. The Expanded Universe started to course correct, and conversations about the Force became much more clinical or forensic. The new canon seems ready to change the conversation once again.

Midi-chlorians are an important metric in deciding someone’s potential to become a Jedi. On that, the Jedi Order of the prequel era was right. Where they were wrong was in the idea that it was the only metric, or that it was a factor in someone’s spiritual connection to the Force. There was a time when the Jedi knew this, but as they grew more government-oriented and militaristic in their final days, they lost touch with their spirituality.

Other sects of Force worshipers continued those spiritual ways. Star Wars: The Force Awakens introduced Lor San Tekka, a member of the Church of the Force. George Lucas himself created this concept for an un-produced live-action television series. The members of the Church of the Force were firm believers in the ways of the Jedi and the power of the Force, but they were not Jedi themselves. Their practices and beliefs were outlawed during the Empire’s reign, so they went underground to continue their way of life. San Tekka eventually settled in a spiritual village on Jakku, where Poe Dameron found him and the piece of the map that led to Luke Skywalker. When the First Order found him too, he died protecting Luke’s whereabouts, knowing that the return of the Jedi was vital to the future of the galaxy and in bringing balance to the Force.

Rogue One introduces Chirrut Îmwe. He is one of the Guardians of the Whills, the protectors of the Temple of the Kyber on the ancient holy world of Jedha. Like members of the Church of the Force, they are not Jedi. They believe strongly in the Force, however, and in protecting the kyber crystals that lined the temple walls.

Chirrut has a strong faith in the power of the Force. He calls it the Force of Others, a term dating back to some of the earliest drafts Lucas wrote for Star Wars. In calling it that, Chirrut recognizes the interconnectedness of all life. It harkens back to what Obi-Wan said, that the Force is an energy field created by all living things. His oft-repeated mantra, “I am one with the Force, the Force is with me,” is a prayer that emboldens not the strength of his powers but the strength of his convictions and his faith. His connection to the Force is strong because his belief in the Force is strong. He may not be a Jedi, but he shows a new side to worshiping the Force by using faith to propel his actions.

Lor San Tekka and Chirrut Îmwe showed how powerful faith can be and how a person can serve and worship the Force without being a Jedi or a Sith. Chirrut, in particular, showed us just how powerful faith in the Force alone can be, bringing a new layer of mystery to the workings of the Force.

The Clone Wars introduced us to many new aspects of the Force. Mortis and the Nightsisters are obviously unique, but so is Quinlan Vos, a Jedi with a strange ability to learn about a living being just by touching an object they used or carried. Vos’ abilities, called psychometry, raise some interesting questions about the nature of the Force. Just how does the energy created by living things affect inanimate objects? Sure, Jedi and Sith use some first-class telekinesis. Levitating rocks, pieces of fruit, astromech droids, and X-Wing fighters is old hat. But seeing someone’s memories by picking up a wine glass? That’s some serious X-Men nonsense. It was totally new territory for Star Wars, but it is right at home in a universe where Ben Kenobi felt a planet die and Luke has premonitions of doom for his friends.

The new baddie in The Force Awakens shook up our expectations as well. When Kylo Ren freezes a blaster bolt in midair during the raid on Jakku, he challenges what we feel is possible. Abilities like Ren’s and Vos’ jump headfirst into the metaphysical waters that made the Force compelling. It gets to the heart of the interplay of matter and energy. How do they do it? It doesn’t really matter. We don’t need an explanation to appreciate that it is possible. We’re once again reminded that characters in this universe are, as Yoda put it, “luminous beings,” who exist in a world where there are no boundaries, even between life and non-life. Everything is connected.

When you go to see a sci-fi movie set in space, you’re expected to accept many impossible things as reality – Starships that travel faster than light, blaster pistols, and laser swords. But it takes a different kind of leap of faith to accept a man with the power to choke the life out of someone with his mind or a kid who makes a one in a billion shot with his eyes closed. And yet, we do accept it because sometimes it feels good to believe in the exceptional, even the magical.

You probably thought you had lightsabers all figured out. After all, the original trilogy and the prequels gave you a pretty good idea of what a lightsaber is. They come in blue or green, or if you are Mace Windu, purple. There was a science behind them. The lightsabers consisted of a plasma blade powered by a kyber crystal that was emitted from a usually metal hilt.

But then the first teaser trailer for The Force Awakens dropped. It showed Kylo Ren walking through a snowy forest on Starkiller Base with a three-pronged lightsaber, and that threw everything we thought we knew about lightsabers out of tune. After all, since when was a crossguard lightsaber a “thing”? In the original trilogy, lightsabers and the Force had a kind of mystique. But the sheer number of Jedi wielding lightsabers in the prequels turned the elegant weapon of the Jedi into something totally mundane. And with that crossguard lightsaber, the mystique has returned.

Without a doubt, Bendu has revived the mysterious nature of the Force. Introduced this past September in the season three premiere of Star Wars Rebels, Bendu represents neither the light nor the dark side. Instead, he is the self-proclaimed “one in the middle,” operating in the overlap between the Jedi and Sith philosophies. The etymology of Bendu’s name dates back to 1973 when George Lucas was developing early story treatments for the first Star Wars film.

Bendu’s very existence indicates that neither the Jedi nor the Sith possess a complete understanding of the Force. Voice actor Tom Baker, best known as the Fourth Doctor on Doctor Who, brings a calming yet inscrutable tenor to the character. Perhaps what makes Bendu so intriguing is that as a non-humanoid Force wielder, he draws parallels to Abeloth, the omnipotent antagonist of the Fate of the Jedi novel series. Abeloth’s own history intersects with that of the family of the Ones from Mortis. But both she and Bendu have an almost supernatural quality from the ways they wield the Force.

Whose side is Bendu on? If Kanan Jarrus or Ezra Bridger asked him that, Bendu would probably say something like, “Both… and neither.” Bendu proves that the Force defies definition since it certainly cannot be defined in terms of a binary. There’s more to the Force than light and dark, for Bendu can open a Sith holocron without succumbing to its tempting darkness. Fans may never know who (or what) Bendu is, exactly — and that’s fine. Not having all the answers about the Force means that characters like Bendu have a reason to exist.