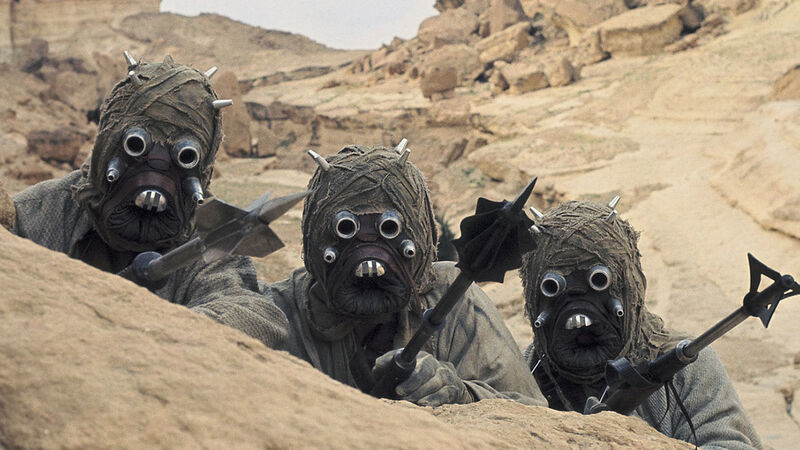 Even though the main story of Star Wars has always focused on the human Skywalker family, George Lucas populated his world with dozens of unique alien species. Over the decades, more were added to the lexicon while fan favorites had their cultures and customs fleshed out. One of the most iconic and enigmatic of those alien species are those of the Tusken Raiders, also known as the Sand People.

In the recent episode of Disney+ series The Mandalorian, entitled “The Gunslinger,” the Tusken Raiders returned, adding another layer of depth to the Tatooine denizens.

During the episode, the Mandolorian successfully barters for safe passage across the Jundland Wastes with a couple of Tusken Raiders using sign language – the first time we’ve seen peaceful interaction with Tusken Raiders and outsiders in any live-action Star Wars story. But the Mandalorian’s understanding of Sand People customs is rooted in a long and winding narrative arc that brought the aliens from “savages” to displaced indigenous people.

In the original Star Wars, a small group of Tusken Raiders played a significant role in kickstarting Luke Skywalker’s journey. If not for them attacking Luke and knocking him unconscious, it’s possible Obi-Wan would have let R2-D2 continue to fruitlessly search for the old Jedi rather than reveal himself to Luke. Due to the pace of the narrative, not much more consideration was given to the Tusken Raiders in A New Hope, but their distinct features and language would quickly cement them in our collective minds.

When The Phantom Menace arrived in 1999, Lucasfilm once again returned to Tatooine to show the origin of Anakin Skywalker. The Tusken Raider returned as well, albeit for a glorified cameo. A small group of them fired upon the contestants in the podrace. One of their shots hit the Pod belonging to Teemto Pagalies, causing him to crash, and the Tusken Raiders were seen celebrating.

Thus far, Star Wars had painted the native inhabitants of Tatooine as savage, primitive creatures. This would bleed over into the rest of the prequel trilogy, culminating with the kidnap, torture, and death of Shmi Skywalker in Attack of the Clones. In the film, Anakin’s inability to save his mother from death at the hands of the Tusken Raiders nudged him further down the path to the Dark Side. The killing of the Jedi younglings began with the slaughter of Tusken Raider children.

But throughout the Star Wars films, the motivations of the Sand People themselves were never explored. They were simply trotted out to be convenient, faceless villains for the Skywalker family to face, generation after generation. Yet surely the alien race had reasons for doing the things they did.

THEY ARE THE LOCALS

As part of the Outer Rim, Tatooine is off the beaten path. As a desert planet, it doesn’t draw a lot of settlers. Sparsely populated by moisture farmers, scoundrels, criminals, and the economy necessary to keep the gears of civilization oiled, it isn’t hard to deduce that humans are not native to Tatooine. They and the other species inhabiting the likes of Mos Eisley are imports. Immigrants. Colonists.

Beyond the rocky outcroppings where the settlers eke out a living, the dunes of the Jundland Wastes belong to the Tusken Raiders (and Jawas). As Disney and Lucasfilm began to streamline the lore, motive and cultural reasoning were retconned in to flesh out why the Sand People are the way they are. From the comics to the encyclopedias to the novelizations, a picture began to emerge. One of a people bound by a catastrophic history, a deep-seated fear of outsiders, and a cultural Force connection to the land and creatures of Tatooine.

The people of Tatooine call the twin suns above the planet the Skybrothers. They believe that water is the most sacred resource and should be treated with reverence. Their masks are designed specifically to retain moisture and keep it from being lost. To that end, Tusken Raiders see moisture farmer colonists as sacrilegious interlopers. By harvesting water from the planet, they outsiders are committing a grave sin. One that must be purged through any means necessary. StarWars.com goes so far as to say Shmi Skywalker was being “ritually tortured,” implying her fate may have been an attempt to undo the damage the Tusken Raiders believed was being caused by the Lars’ family farm.

The Sand People are a deeply hierarchical society, split into manageable clans of 20-30 individuals, each with its own idiosyncrasies. Some clans will occasionally deal with outsiders, others kill on sight. The culture is determined by the chieftain, an honorific that is earned through combat, not inherited. Men and women dress in distinctly different styles, with men in what we would think of as “traditional” Tusken Raider attire. Women wear far more elaborate face masks and shawls that hang down nearly to their waists. Children wear asexual robes until they reach the age of fifteen. At that point, each Tusken Raider, regardless of gender, must prove themselves an adult by killing one of the most dangerous predators on Tatooine: a Krayt dragon .

Now things start to get interesting.

Fifteen is a milestone age in the life of a Tusken Raider, regardless of gender. It is the age at which they are sent out into the canyons as a group to slay a Krayt dragon and remove the pearls from within its body. The youths are observed from a safe distance by the clan elders and are granted the full autonomy of adulthood should they succeed. The Krayt dragon horn will then be harvested by the triumphant Tusken Raiders to be fashioned into a traditional Gaderffii Stick. Each newly minted adult Tusken was also told to choose a Bantha mount.

Then there’s the Krayt dragon pearls. Krayt dragons have popped up several times throughout the Star Wars lore. One of the more recent appearances was on an ancient artifact in Thrawn’s office in Star Wars Rebels. The stylized dragon appears to be traveling through a portal of some kind. Combined with Lucasfilm confirming Krayt dragon pearls are basically organic kyber crystals, as they can power a lightsaber, opens up all kinds of possibilities. To date, Lucasfilm hasn’t said what the Tusken Raiders do with the Krayt dragon pearls, but considering one is needed as part of the rite of passage to adulthood, there must be a deeply important reason.

Finally, we know now that the Tusken Raiders can sense the Force. In Star Wars: From a Certain Point of View author John Jackson Miller contributed the short story “Rites.” It told the story of A’Koba, one of the Sand People who attacked Luke Skywalker in A New Hope. It wasn’t Obi-Wan waving his arms about that scared off the attacking Tatooine natives. It was the sensation they experienced when the Jedi mimicked the sound of a Krayt dragon queen. A’Koba and his companions felt the presence of the queen, despite her not being there. They knew of Obi-Wan as a shaman and called his abilities desert magic. Whether they know it as the Force or have another name for it, there is no doubt the Tusken Raiders have a natural connection to it.

Hopefully, Lucasfilm explores more of their culture in future content. Especially whatever they’re doing with those pearls.