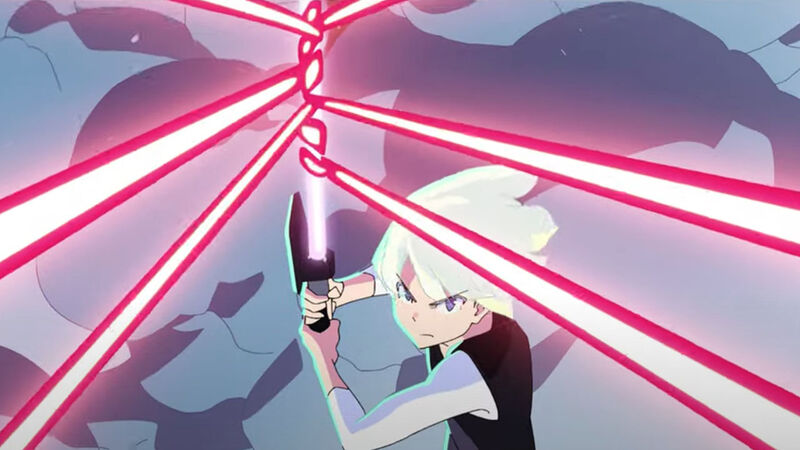 If ‘Star Wars: Visions’ Has Got You Psyched, You Should Try These Anime

Disney is expanding the Star Wars universe with a new anthology series of anime-inspired shorts. Created by several of the leading Japanese anime studios, >Star Wars: Visions features nine all-new stories. The format follows in the footsteps of other celebrated animated series such as The Animatrix, Halo Legends, and Netflix’s Love, Death & Robots, which you might have caught. As a Disney+ exclusive, Star Wars: Visions will showcase new non-canon stories that promise to excite audiences. But what should you seek out if you want to watch more anime titles that have inspired the likes of Star Wars: Visions? Check out our list below for some essential works.

What if you spontaneously combusted into flames when angry? Now, what if that happened to everyone? That’s the premise of Studio TRIGGER’s Promare. 30 years after the event known as The Great Burning, there is a dedicated force, known as the Burning Rescue, established to stop fire outbreaks. Galo Thymos is part of that team, but he’s about to meet his nemesis in Lio Fotia, the head of a group of villainous Burnish (the name given to those with the ability to combust). A Studio TRIGGER production wouldn’t be complete without giant, elaborate robots and flashy visuals. Promare has both in spades.

Studio TRIGGER is responsible for two Star Wars: Visions episodes, “The Twins” and “The Elder.” The Twins is intriguing in particular because director Hiroyuki Imaishi’s style, as seen in Promare, is all over the images that have been released. Studio TRIGGER has been one of the premier animation houses since 2013, and their high-octane stories are always worth your time and attention.

Ride Your Wave answers that eternal question of what you get when you mix a firefighter, a surfer, and director Masaaki Yuasa, who just recently has been showcasing his latest film, Inu-Oh, at the Venice International Film Festival. When illegal fireworks threaten to burn down keen surf fan Hinako’s apartment complex, she’s in great peril until she is rescued by firefighter Minato Hinageshi. The catastrophe brings them together and on New Year’s Eve, Minato envisions what the next twenty years with Hinako could be like. Sadly, a tragedy takes Minato’s life, leaving Hinako alone to pick up the pieces of her life.

At first glance, it’s a fluffy rom-com, but Ride Your Wave evolves into a story about overcoming loss and moving forward. What’s so wonderful about the works from Yuasa and studio Science Saru is the variation. There are some signature animation flourishes, such as the exaggerated figures and expressions, but each film has the ability to expand our imaginations. Their collaboration on two Star Wars: Visions stories, “Akakiri” and “T0-B1”, promises to deliver on each aspect.

Winner of Anime of the Year at 2018’s Crunchyroll Awards, Made in Abyss is a lot more serious than its art style and young protagonists let on. Riko, a girl who lives in Orth, dreams of venturing into the giant hole known as The Abyss. Explorers delve into the abyss in search of treasures, but each layer presents new challenges. The deeper you go, the more likely you’ll suffer physical ailments you’ll never recover from. Riko believes her mother is still alive deep in the abyss, and along with her robot friend Reg, they begin their dangerous journey. If you like thrilling adventures, Made in Abyss could be your new favorite title.

Kinema Citrus, the studio responsible for Made in Abyss and the Star Wars: Visions episode, “The Village Bride”, has continued to rise in popularity among anime fans. Their other titles include Revue Starlight and The Rising of the Shield Hero, but Made in Abyss is still their greatest accomplishment, due to its ability to defy all expectations and its horrifying spin. It’s a modern-day masterpiece in the anime genre.

A Whisker Away, from Studio Colorido, Toho Animation, and Twin Engine, starts with frightening implications, but behind that premise is a message about opening your eyes to the love around you. Miyo has a strained relationship with her parents; her mother abandoned her when she was younger, while her father has chosen to remarry. Despite these complications, she puts on the facade of a carefree, spirited, teenager. When she is gifted an enchanted mask, she finds she is able to transform into a cat and disguises herself to get closer to her crush, Kento Hinode.

The feelings of the teenage Miyo are intense. She becomes obsessed with her crush, so much so, that she might lose her grasp on humanity forever. A Whisker Away could easily send the wrong message to audiences, one that says if you stalk your crush enough, they’ll grow fond of you. Fans of Hayao Miyazaki’s Spirited Away might enjoy this feature as Miyo’s story has more in common with it than just the title, in how she must repair her relationship with her family, and mature. Studio Colorido is a subsidiary of the production company Twin Engine and they mostly work on feature-length anime. For Star Wars: Visions, they’ve collaborated on the episode “Tatooine Rhapsody”.

The newest series on the list, Fena: Pirate Princess, looks beautiful, with crisp animation and great character designs. The anime follows the exploits of Fena, a young princess who escaped her father’s burning ship only to find herself in a precarious position — she’s to be sold to a suitor. On the eve of the exchange, the past catches up to her and she’s rescued to embark on a new journey — discovering the true nature of the artifact that led to her father’s death. It’s still early in Fena’s run, but it’s already an anime worth a look.

Quality is a word synonymous with Production I.G. The company has been around for over 30 years and has worked on seminal titles like Eden of the East, Haikyu!!, and the Ghost in the Shell series. Usually, when they’re involved, there is a good reason to be excited about the outcome. Expect to see their talents showcased in the Star Wars: Visions episode “The Ninth Jedi.”>

Based on the award-winning manga series, Golden Kamuy takes place after the Russo-Japanese War in the early 20th century. As a veteran of that war, Saichi Sugimoto needs some money. He stumbles upon an old man with an interesting tale; it’s said there is a huge fortune hidden by the Ainu people. In order to keep the location secret, the map was painted on the backs of various convicts and Saichi must locate each one to complete the map. He’s not the only one looking though. On his journey, he’s joined by a young girl of Ainu descent named Asirpa, who accompanies Saichi so that she can get revenge for her father’s death.

Geno Studio is another subsidiary of Twin Engine and most of their attention is devoted to Golden Kamuy. Fans of the manga originally had concerns that the anime would never meet their high expectations, but as it now enters its fourth season, Golden Kamuy has proved its mettle. Geno Studio has worked on the Star Wars: Visions episode, “Lop and Ochō”.

How does one even begin to explain the madness of Pop Team Epic? One part sketch show, another park utter nonsense, Pop Team Epic is absolutely crazy. The show features two leads, Popuko and Pipimi, as they spoof other anime and pop culture with their nonsensical antics. It’s a show that was made to become countless memes. The show is a typical anime TV episode length at a half-hour, but the first half is repeated in the second half of the episode with different voice actors and subtle differences. It’s an endurance test, but also unlike anything you’ve ever seen.

Kamikaze Douga has contributed some animation to Jojo’s Bizarre Adventure, but they’re probably best known for their work on Pop Team Epic. With such a bizarre pedigree, you should definitely look forward to seeing what they do with their episode, “The Duel”.

Love the idea of turning live-action favourites into animation? Check out our interview with the designers of Marvel’s What If…? on how they pulled off this amazing feat.

Max Covill
Mhcovill
Max Covill is freelance journalist and podcast host for @itsthepicpod. He has written for Polygon, Film School Rejects, Playboy, SyFy, and many others since 2011. You can find him on Twitter @mhcovill discussing all things Video Games, Movies, and Anime.