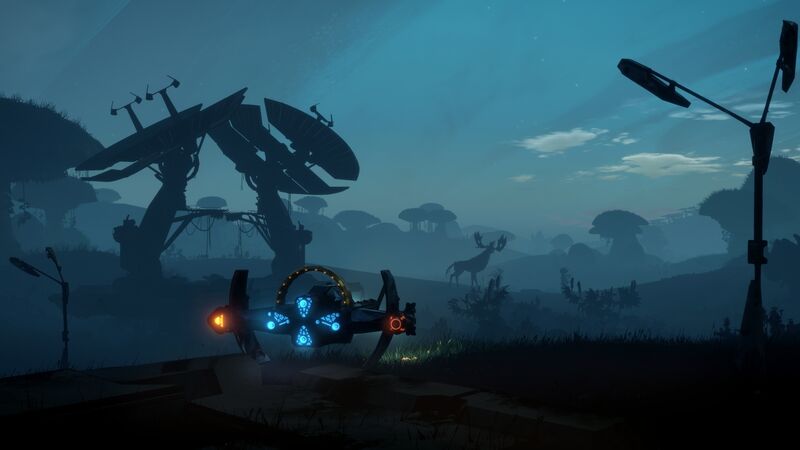 ‘Starlink: Battle For Atlas’ is an Open World ‘Star Fox’ But Struggles on Switch

Out of all the games we expected to turn heads at E3, it’s fair to say that Starlink: Battle For Atlas wasn’t one of them. Announced during last year’s Ubisoft’s conference to very little fanfare, this year’s show gave us a deeper look at this intriguing space exploration meets toys-to-life experiment.

And much to our surprise, it actually kind of won us over.

With a sleek and exciting on-stage demo showcasing a mix of intergalactic exploration and frantic space battles, Starlink looked like the blend of Star Fox and No Man’s Sky we never knew we wanted. It seemed that we weren’t the only ones who noticed the similarities to a certain Nintendo franchise.

A Star for Sore Eyes

The news was the icing on an already appetizing-looking cake, so we happily went over to Nintendo’s booth to give it a whirl. Unfortunately, when we excitedly picked up our JoyCons though, our experience with the Switch version didn’t exactly match the high-budget epic we expected.

While the core gameplay seemed pretty promising, Ubisoft’s usually stunning Snowdrop engine was clearly struggling to keep up with Starlink on Switch. Running at a sub-HD resolution, the beautifully designed worlds glimpsed in the trailer looked less like a visual treat on Nintendo’s hybrid and more like an eyesore.

With the docked version demoed on a sharp-looking 50-inch TV, the sprawling planet we found ourselves soaring across featured the kind of jaggies that we hadn’t seen since launch-era Xbox 360 games.

It’s a shame, because the actual gameplay here shows a lot of promise. Combining fast-paced dogfights with sprawling planetside exploration, our demo hinted at a refreshingly unique and surprisingly deep little adventure game.  Yet, it seems to be Starlink’s ambition that mars the experience on Switch. In Starlink, there are no loading screens between entering a planet’s orbit and soaring across its surface.

Tasked with taking down some alien generators, we shot and rolled our way through enemy laser-fire, ducking and weaving through their path as we fly across the nameless planet’s surface.

It’s simple stuff, but a ton of fun regardless. And thanks to the ability to do this all from Star Fox’s Arwing, it seems like a Nintendo fan’s dream. Yet, thanks to the lack of visual fidelity we saw during our demo, it’s hard not to feel like you’d be getting a lesser experience on Switch.

While Ubi’s Snowdrop engine shined brightly on Switch exclusive Mario and Rabbids: Kingdom Battle, that was a very small-scale affair. It looks like the problem here is manage seamless exploration is in Starlink.

Still, the game’s launch is still a few months away, leaving the team more than enough time to optimize the game for Nintendo’s platform. While we’re yet to test out the game in portable mode, what we’ve seen so far makes the Switch version of Starlink difficult to recommend as a home console experience.

Let’s hope that Ubi manages to further optimize Snowdrop for Switch, then fans might finally have the open world Star Fox game they’ve long been pining for.