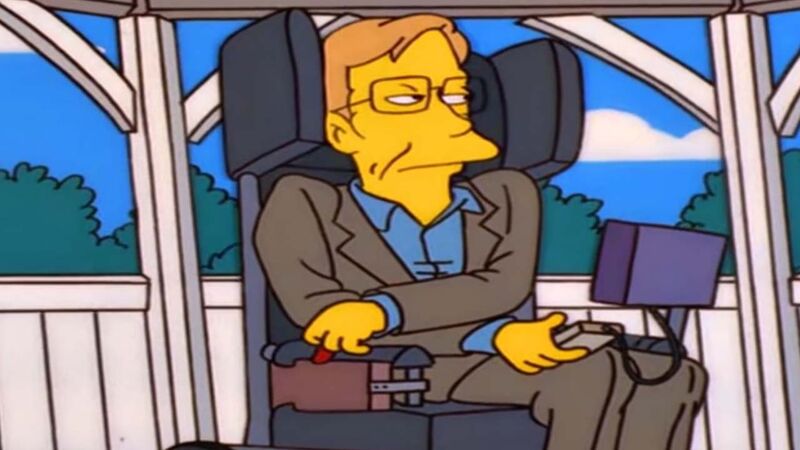 The Most Memorable Stephen Hawking Cameos

Stephen Hawking passed away today, peacefully at the age of 76. He was a brilliant and innovative scientist who forwarded our understanding of physics. He created groundbreaking theories, then replaced those with even better theories, and then made them all accessible enough for us to read them.

But he also had an endearing sense of humour. Stephen Hawking loved a good gag, and was always willing to make fun of himself — which is why there’s a wealth of cameos in popular culture.

While his iconic, synthesised voice could be replicated, it often wouldn’t have to be. He was happy to be in on the joke himself.

Many sci-fi shows pay homage for its own sake, but of course any sci-fi worth the “sci” in its label will have a hard time avoiding one of the biggest names in astrophysics. It’s common for sci-fi shows to explain how their universe got from our 21st century level of technology to where they are.

Such bouts of exposition might name famous scientists like Stephen Hawking with a comment like “He was almost right, but not quite…” The technique serves to ground whatever fantastical elements that universe may have, and legitimise it. By rooting it in real science, it seems less like magic and more plausible.

Let’s start with the one everyone should be familiar with…

‘The Simpsons’ and ‘Futurama’

Stephen Hawking had so many cameos on these shows you’d think he had a red phone next to his bed with Matt Groening on the other end.

In actual fact, Hawking’s daughter Lucy knew a scriptwriter working on The Simpsons, who said he’d love to include Hawking in a show sometime. In an older interview, Hawking said:

I accepted immediately. Because it would be fun, and because The Simpsons is the best thing on American television. The episode was very funny, and almost as many people know me through The Simpsons as through my science.

All of the times you saw Stephen Hawking on these shows were voiced by the real man. He was pleased with his depiction, which he described as “good-humoured.”

In one of Stephen Hawking’s funniest skits, he invades Little Britain for a variation on its recurring sketch in which the man in a wheelchair can actually walk.

Though it turns out Stephen Hawking can do much, much more than just walk…

Simon Helberg (who plays Howard) was a little nervous about doing his Stephen Hawking impression while he was on set, but he was assured that Hawking was fine with it.

There was a large gap of several seasons during which Hawking had no cameos, but they came back in earnest from Season 8 onwards.

He was even happy to introduce TBBT panel at ComicCon.

‘Star Trek: The Next Generation’

Hawking may have appeared as a hologram in the episode Descent, but his performance was very real. In an effort to see how the greatest human minds would behave in the same room together, Data assembles Sir Isaac Newtown, Albert Einstein, and Stephen Hawking for a poker game.

Who can blame him? We’d do the same.

The hand sees Stephen Hawking squaring off against Albert Einstein.

Hawking played himself in the episode, and a tour of the set allowed him to sit in the captain’s chair. When he saw the Warp core, he is reported to have said, “I’m working on that.”

Season 5 of Atlantis had a later episode named Brain Storm, several astrophysicists of renown gather to witness the technological achievement of Dr. Malcolm Tunney. Unfortunately Hawking was played by an actor in this episode though the nod is nice.

The device on show is able to cool the planet, countering climate change. At the black tie event, we can see real science personalities such as Neil deGrasse Tyson and Bill Nye, the latter of whom helps save the day when the climate cooling device malfunctions.

Stephen Hawking is seen from behind in his chair, as the device is unveiled.

Of course, Hawking was always up for a completely random bit of playing around, like when Jim Carrey just phoned him up for a bit on Conan O’Brien:

Hawking didn’t limit himself to broadcast and film, of course. Stephen Hawking cameos stretched into the realm of online comedy as well. Check out this great video from Comic Relief:

Then of course, there was that time Paul Rudd took on Stephen Hawking in a game of Quantum Chess:

Of course, there are countless other references and homages to Stephen Hawking — from stars and ships being named after him in various sci-fi properties like Mass Effect, to stand-up comedian jokes, to an entire rapper’s persona — but we tried to collect the most memorable cameos in which he’s actually involved. As it happens, those are the funniest anyway.

Vale, Stephen Hawking. A titan of science, a pillar of comedy, and an exemplar of not taking oneself too seriously.