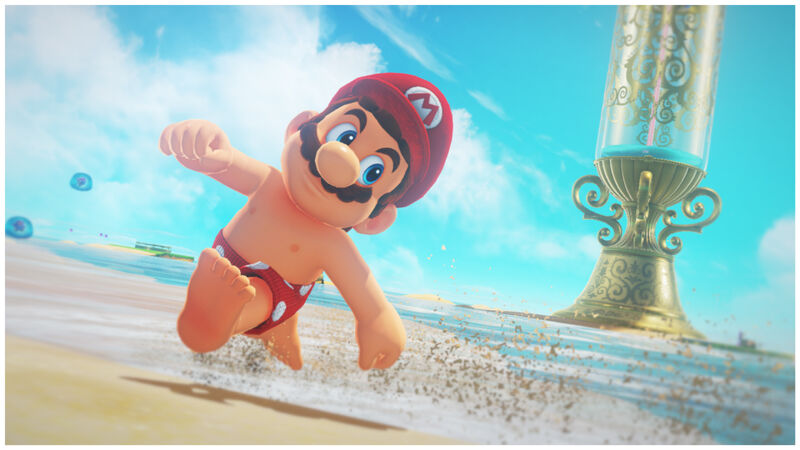 When the plucky plumber’s Wii U outing was first announced, most fans reacted with slack-jawed disappointment. Looking back, it’s hard to blame them. After the wonderful ambition and creativity shown in 2007’s interstellar epic Super Mario Galaxy, Super Mario 3D World’s familiar-feeling environments seemed like a bafflingly step backwards for the mustachioed mascot.

As it was developed by Nintendo’s untouchable Mario team, though, 3D World ultimately turned out to be just as much fun as you’d rightfully expect. Yet, despite this Wii U offering giving fans their Mushroom Kingdom fix, many gamers were left yearning for a more meaty platforming adventure.

Now, after spending three hours with the plumber’s first proper Switch outing, it looks like that epic Mario adventure is finally here.  While we’ve played Super Mario Odyssey before — and came away impressed — this time, we were with the game long enough to truly explore several of its wonderful sandbox worlds.

This Is The Epic Mario Adventure Fans Have Been Waiting For

To any fans looking at gameplay videos and worrying that there won’t be enough to do in Super Mario Odyssey, you can now breathe a sigh of relief. With each Kingdom containing a boss, a silly amount of Power Moons to find and a wealth of mini games and secrets, there’s more to do here than in any other Mario game to date.

Thankfully though, Super Mario Odyssey doesn’t seem to be a matter of quantity over quality. Like in Galaxy, each world players visit somehow manages to look and feel refreshingly unique. Whether you’re climbing the Manhattan-esque skyscrapers of New Donk City, or running across the colourful turnip-filled Luncheon Kingdom, each new area serves as a nice palette cleanser from the world you were in before. With kingdom-specific mechanics and a range of NPCs to interact with, so far, no two worlds we visited really felt the same.

Yet despite being smitten with the game’s expansive environments, there was one new addition that left an even bigger impression.

Cappy Is Far More Than Just A Gimmick

As you’ve probably seen in trailers, Mario’s new pal Cappy is more than a weird outfit choice. Thanks to this new googly-eyed hat, our hero can now briefly take control of any enemy he pleases. In what can only be described as a creepy new mechanic, chucking Cappy on a nearby foe lets you temporarily posses them, giving Mario access to all of their abilities. It’s this eyebrow-raising mechanic that makes the plumber’s latest adventure feel fresh and unpredictable.

As each world in Super Mario Odyssey is littered with enemies of all shapes and sizes, chucking Cappy at your nearest adversary quickly transforms traditional Mario platforming into something completely unrecognizable. With some enemies able to swim and others capable of bouncing buoyantly on streams of lava, taking the time to chuck Cappy at foes often rewards players by giving them fun and surprising new ways to play.

As you’d expect, suddenly gaining a new move set can often help Mario reach different areas. Yet, even when we ended up possessing seemingly unimportant enemies, we often found a way to use their skills to discover the game’s most sought after collectables: the Power Moons.

Even when it serves absolutely no purpose to lob Cappy at an enemy, shuffling around as a Goomba is just a wonderfully joyous gaming experience. In fact, we were so preoccupied with inhabiting the bodies of Mario’s foes, that we found ourselves neglecting many other aspects of the worlds we visited.

The first place we explored was the aforementioned Luncheon Kingdom. Ruled by a world of Rick and Morty-esque fork people, Mario finds Luncheon’s inhabitants fleeing from a deadly bird. If a giant flying monster terrorizing the Kingdom wasn’t bad enough, this winged scamp has also stolen the Luncheon’s Kingdom’s prized stewpot, stopping the land from making its famous stupendous stew. Unsurprisingly, its up to good-guy Mario to take care of this little problem.

After running through the populated town of Peronza Plaza, we spin some turnips into a stew, delighting a few local chefs and earning us a nice Power Moon to boot. With the bird perched on a nearby mountain and our path blocked by a suspiciously breakable-looking wall, it was time to call on Cappy. Flinging him at a frying-pan-wielding Hammer Bro we used the enemy’s seemingly infinite amount of frying pans to destroy a nearby wall, allowing us to advance up a precarious-looking path.

From then on, it was largely business as usual, with some great platforming sections seeing Mario advance through pools of lava as we hopped between inhabiting his body and that of some nearby lava-proof enemies.

Life’s a Beach in The Seaside Kingdom

The next world we got to visit couldn’t have been more different. Set on an idyllic-looking beach, Bubbalaine in the Seaside Kingdom is a source of sun, fun and yes, THAT Mario nipple pic. Sprinting across the soft-looking sand, we were tasked with freeing this sun-soaked Kingdom from the clutches of a giant (and very angry-looking) Octopus.

In order to do so, we were tasked with filling up four water containers. With the nearest container in question buried deep on the ocean floor, we dove into the crystal-clear waters before us. While Mario is a pretty solid swimmer, unfortunately for us, he still needs oxygen. Spinning Cappy at a nearby fish, our respiratory problems became a thing of the past.

Thanks to the game’s surprisingly in-depth Uncharted-esque photo mode, we snapped some brilliant shots of our underwater adventures. We even put filters on our fishy and everything.

With the iconic Cheep-cheep under our control, swimming through the murky depths of the ocean and avoiding projectiles felt like the kind of underwater excursion you’d find in Crash Bandicoot.

Another thing that surprised us about Super Mario Odyssey was just how challenging the boss fights were. While we were too distracted by exploring each Kingdom to make it to all three bosses, the two battles that we did manage to participate in were hard as nails, requiring more thought than the usually simplistic series of dodging attacks and jumping on enemies.

For fans who have been itching for a more meaty Mario adventure, what we’ve played so far suggests that Nintendo has delivered, and then some. Odyssey looks to be the most ambitious Mario game yet, and we’re itching to dive into the full thing. Keep it locked to Fandom for our final verdict next month.