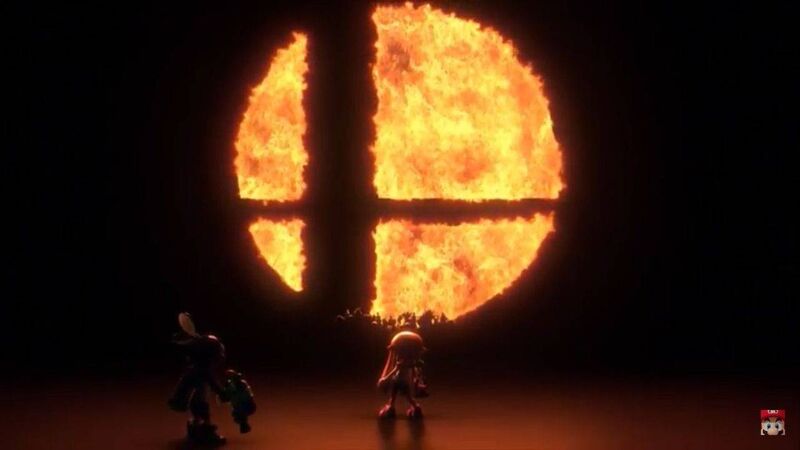 Super Smash Bros Is Coming To Switch – But Is It A New Game, or Just a Port?

After soaking fans with a sea of surprise third-party announcements for its latest console, 28 minutes in, it looked like we’d seen it all in yesterday’s Nintendo’s surprise Direct. Thankfully though, those devious folks over in Kyoto were saving one last surprise for fans — and it was doozy.

Segueing from a Splatoon 2-heavy section into a CG inkling battle, the two squid kids brightly-lit splatter fest suddenly turned dark – behind them rose the flaming circular symbol that can only mean one thing – It’s Smash time.

With E3 only a few months away, many fans assumed the big N would save its prized fighter until then. Unsurprisingly then, this unexpected reveal sent fans everywhere into a frenzy. And the best part of it all? Nintendo’s all-star brawler will be smashing its way onto Switch later this year.

While this small tease doesn’t give a lot away, we dug a little deeper and found some tasty clues about what’s in store for Super Smash Bros on Switch.

Yet, despite the excitement surrounding Smash coming to Nintendo’s new system, the key question fans are asking is will this be an entirely new game?

With the Switch, Nintendo has proved time and time again that it isn’t shy about simply polishing up Wii U games and shifting them to its more successful older brother. This has led many fans to wonder if Smash Bros Switch will be less stellar new entry and more iterative update like Mario Kart 8 Deluxe.

Yet, aside from the franchise’s first reveal of Splatoon’s inklings, there are a few other hints that lead us to believe that the upcoming fighter isn’t just a no-frills port. In fighting games, balancing is key. Ensuring that every character feels capable but yet counter-able is crucial to not only keeping a fighter’s fanbase happy, but more importantly – keeping the game feeling fun.

It would then have made sense to keep Link the same as he was in his Wii U outing. Yet as we can see from the silhouette, this isn’t your dad’s Link. Sporting the trademark pointy ears and sleek hairstyle he rocked in last year’s The Legend Of Zelda: Breath Of The Wild, this new and improved Link suggests we might be in for a more substantially re-worked Smash than fans expected.

The trailer also credits HAL Laboratory, suggesting that the team who developed Super Smash Bros: Brawl could well be making a welcome return to the franchise. With the studio bowing out for Super Smash Bros Wii U and leaving Bandai Namco to lead the charge, could HAL’s return mean that Smash Bros Switch is getting a subspace Emissary-style story mode?

We certainly hope so.

Super Smash Bros for Switch launches later this year. While no further reveal dates for the game have been confirmed yet, you can bet that Nintendo will be showing us more at its rapidly approaching E3 conference.