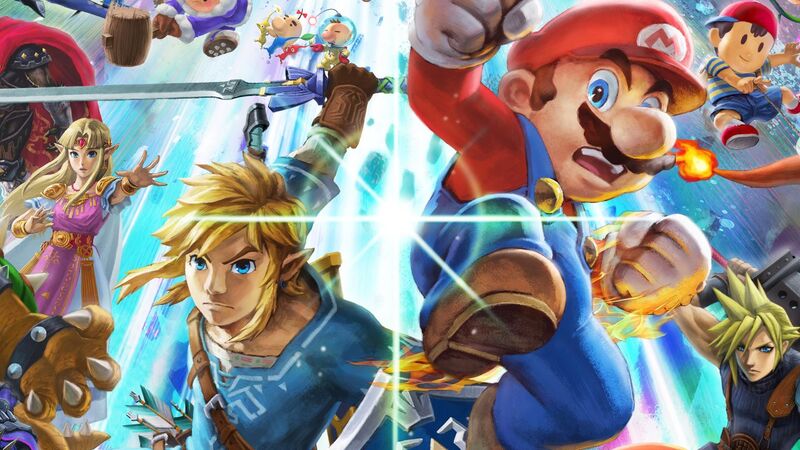 If you’re a video game fan, you need to have Super Smash Bros. Ultimate. Not only is it a robust, satisfying, deep, fun experience, it’s also the single biggest love letter to gaming we’ve ever seen. This is a game created by people that adore gaming, that know how to take ingredients from the biggest and brightest franchises in the world and combine them to make a product that is – somehow – even greater than the sum of its parts.

Masahiro Sakurai and his team of artisan developers have exceeded expectations in practically every way. This is not just a port of Super Smash Bros. 4 – no, this feels like a wholly new beast. It’s a credit to Nintendo and the constant lil’ box of surprises that is the Nintendo Switch that Super Smash Bros. Ultimate – seemingly out of nowhere – has become not only the best multiplayer game Nintendo has to offer, but also one of the House Of Mario’s best single player games, too.

World of Light – the mode that takes centre stage as Ultimate’s biggest new feature – acts as the game’s ‘story’ mode. Big bad Galeem has imprisoned all the Smash fighters and started cloning the poor blighters and sending their shadows across the world in a fit of frenzied destruction. It’s up to the now-canonically most powerful Smash fighter (read: Sakurai’s favourite), Kirby, to liberate the souls of the other 73 (!) fighters.

World of Light is astounding, but from the first hour — you wouldn’t know it. Smash’s new adventure mode starts off kind of slow – putting players through three nodes of what appear to be copy/paste challenges with a few modifiers that feel like less exciting versions of regular Smash bouts. Thankfully though, as you sink your teeth deeper into the map, something wonderful starts to happen. You realise that every node, every encounter, every iota of this mode has been carefully crafted and ordered in order to achieve something very specific.

Here, your mission is simple: unlock Spirits and use them to help you take out more powerful fighters. Spirits are essentially modifiers that you can equip to make battles easier – some might power up a weapon, others may make it easier for you to launch enemies, or even allow you to start the fight equipped with an item. But every spirit – and there are over 1000! – has a counter tailor-made to suit it, and the love it shows every game franchise you’ll find in Smash is, frankly, obscene.

Take Hal Emmerich from the Metal Gear series. His Spirit fight takes the form of a modified Dr Mario that can summon ROBs to fight for him, and whilst ‘Hal’ himself runs from the fight, his Metal Gear ROBs hunt you down aggressively. You only need to beat ‘Hal’ to win. Or take the Ho-Oh from Pokemon Spirit – with Ho-Oh not actually being a fighter in the game, this battle takes the form of a massive gold Charizard that’s got an almost-infinite Curry power-up, meaning it’s constantly spewing flames.

With over 1000 Spirits on offer, we were consistently amazed by the creativity Nintendo demonstrated in thinking up these bouts. Who would have thought that the conditions, items, stages and fighters in the Smash universe would let you mimic and pay homage to so many classic gaming moments? Unlike many adventure modes in fighting games, nothing in World of Light feels tacked on.

Just when you think you’re used to the kind of tricks the mode will pull off, you’ll suddenly uncover a whole new area of the map and be floored all over again. Midway through the mod, we stumbled upon an entirely separate part of the map that apes the Street Fighter II stage select screen, and the matches you’ll find there have conditions that briefly turn the game into a Street Fighter clone. It’s madness. Utterly brilliant madness.

The one downside to Ultimate’s staggering wealth of content is the frustrating way the game decides to drip feed each unlock to you. You’ll start Ultimate with the original eight Nintendo 64 Smash characters (Mario, Donkey Kong, Link, Samus, Yoshi, Kirby, Fox, and Pikachu) and from then on you’ll need to unlock every other fighter. This can be done by emancipating the characters in World of Light (good luck finding them all!) or being met with challengers after playing any of the other modes in single-player or multiplayer.

The conditions for unlocking characters seems random – and that’s quite sad. Say you and your mates pick up the game on launch and want to play as Bowser and Chrom, well, you’re out of luck. At the time of writing, we’ve sunk over 20 hours into World of Light mode, and yet, we’re still not even close to unlocking all the fighters. It’s a good indicator of how much content there is… but it’s not the most player-friendly way of doing things in 2018’s environment.

Still, it’s a nice nod to series purists. We ripped through Pikachu’s Classic Smash mode (which is a set of Pokemon battles, by the way!) and afterwards we were rewarded with a chance to battle Princess Peach. If you win, you unlock her, if not, you can challenger her again to unlock her later. This game really doesn’t make unlocking fighters easy for you – and we do admire that, but  it sometimes feels like Nintendo is walling off content simply for the sake of walling off content.

So, how does the actual fighting handle? You can immediately tell that the balancing in the game is better than the Wii U’s Super Smash Bros. 4: Bayonetta can no longer simply run rampant and effortlessly dominate all the other characters. Thanks to newcomers like King K. Rool and the Inklings mixing up the tier list, as well as properties being altered slightly in classic characters’ movesets, playing Smash Ultimate is like a re-education rather than a rediscovery for returning players.

Newcomers and veterans alike will bask in some small yet meaningful changes, too. Each character now has mass, for example: you won’t clip through each other in passing on the stage. Like ‘a real fighting game’, Smash fighters now connect with each other even when in neutral mode – it adds heft and consequence to moving around the stage, and makes you think even more carefully about recovery and stage zoning.

With 74 fighters in the roster, there are always going to be joke-tier characters, or those whose gimmicks just don’t fit into the meta. But we can safely say, in our experience with Smash Ultimate, we can’t see how one character is going to walk all over the others. It’s well-balanced, it’s well thought-through and the 11 new fighters all bring something entertaining and interesting to the table. Credit where credit is due: Nintendo has bottled witchcraft here, it boggles the mind thinking of how much playtesting it must have taken to make this roster harmonise the way it does.

Super Smash Bros. Ultimate is – in no uncertain terms – one of the best games on the Nintendo Switch. It comes brimming with everything that made the previous game in the series so impressive, plus more content, more fighters, more polish and most importantly — more love. The option to quickly and easily generate up to 32-player tournament brackets is baked into the game, the ability to play 74 different versions of Classic Smash comes as standard, and over 800 music tracks round out an obscene value-for-money package that celebrates everything that makes the Switch great.

Even from a technical standpoint, this game excels: during a review session in the Nintendo offices, we saw eight players on one console, all choosing Ice Climbers in a 5-stock Smash setup. That means 16 characters on-stage, filling up the screen, all going at each other with the tenacity and aggression you’d expect from competitive gaming enthusiasts. The Switch didn’t bat an eyelid: the game was smooth, responsive, colourful and chaotic… a perfect summary of everything Smash Ultimate is.

There are no two ways about it: this is one of the most impressive games on the Nintendo Switch and represents some of the best value for money we’ve seen in video games in years, whether you’re into single player or multiplayer. Buy this game, you will not regret it.