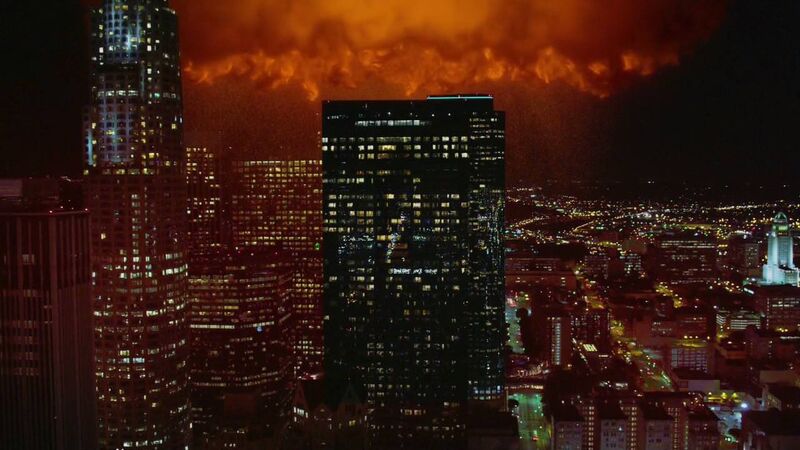 Have you ever had one of those unbearable Thanksgivings? The ones where your crazy uncle keeps going on about politics, various children of unknown relations keep running around screaming and your friends just stand there looking like they have no clue what is going on? It appears that it can happen to Supergirl too.

There’s a bit of a squabble going on between Alex and Jimmy and Winn. Alex is determined to come out to her family and isn’t going to let some minor vigilantism usurp her moment. Mon-El is having some minor culture clashes after being asked to bring stuffing – he took some from his bed. Just when things finally seemed to be settling down, a Breach flashes above the table to ruin the mood.

Determined to get to the bottom of the Cadmus events, Kara decides to use her reporter skills to probe Lena Luthor for answers. Just to be on the safe side, Alex has Winn hack everything he can. The interview falls flat and Lena calls her mother when she realizes what the investigative reporter was after.

Mon-El decides to go to his favorite hidden alien bar for a quiet drink and spots a familiar figure. But it’s not J’onn he encounters – it’s Hank Henshaw, the Cyborg Superman. After trading blows, Henshaw vanishes into the night. Back inside, a gaseous device erupts and kills all non-humans.

Back in the DEO, Mon-El is placed in isolation to avoid spreading any contamination he might have picked up. As only aliens can be targeted by the bio-weapon, Martian Manhunter and Supergirl are grounded indefinitely.

With the Luthor heart-to-heart going on, Lena appears to be the lesser of two evils as she tries to uncover her mother’s plot. Heartbreakingly, she realizes that her Lillian is lying the entire time because she claimed to love her adopted daughter.

Kara and Mon-El decide to pass the time with a game that destroys family love forever – Monopoly. With Mon-El still behind glass, Kara moves all the pieces as she tries to probe her opponent for information. Eliza Danvers mentioned that Mon-El appeared to have a crush on Kara. Unfortunately, cultural differences make tiptoeing around the subject impossible. Terms like ‘crush’ or the always clear ‘like like’ don’t translate into alien. She ends up having to ask if he wants ‘to mate’. Mon-El actually laughs hard enough to trigger a fit from his exposure to a bio-weapon.

Mrs. Danvers has uncovered a Kryptonian protein in the samples taken from Mon-El. Kara goes to the Fortress of Solitude to find any information she can. But it appears that Henshaw did more than simply read a few files – Kelex recognizes her as an intruder and she is forced to destroy him.

With pure plot convenience on her side, Henshaw left the files on Project Medusa open. A hologram of Zor-El reveals that he was part of the team to construct the original Medusa virus. It only targeted non-Kryptonians and would kill any enemy combatants in war.

Returning with this information to the DEO, Alex gets to work with breaking down the virus samples taken from Mon-El. Eliza arrives and asks what Alex has been trying to tell her. She has already figured out that her daughter is gay even if Alex was frightened it might disappoint her. Outside, J’onn reveals his White Martian disease to Kara. Alex and Eliza arrive and reveal a key component in the Medusa virus is only made by L-Corp and Supergirl soars off to keep it safe.

At L-Corp, a fight quickly erupts between Supergirl and the Cyborg Superman. A Breach saves her from an untimely death by Maggie takes a laser to her shoulder and Henshaw escapes. With no cure in the files Winn hacked and both Danvers unable to create one, Supergirl tries – and fails – to sway Lena Luthor to her aid.

As Alex stitches Maggie back together, she tells her friends how happy she is now that she has come out to her family. It’s not actually about either of them but how Alex is now happy being herself. It’s quite a deep moment for a superhero show.

Back in Mon-El’s room, Kara reveals that her father created the Medusa virus. Mon-El kisses her right before falling back unconscious. As it that wasn’t awkward enough, Lena readily hands over a large stockpile of Isotope-454 to her mother. The Dark Side is strong in all Luthors. Winn detects the movement of such a large shipment and J’onn take Supergirl to combat the threat.

By the time they arrive, Lena is ready to launch their doom. Despite Supergirl begging her to stop, the missile is launched. Kara flies off to deal with the virus as Cyborg Superman faces down the Martian Manhunter. Unfortunately, the White Martian cells have made him increasingly aggressive and deadly. He almost kills Hank with Kara preventing their respective deaths at last second.

Even though the Medusa virus detonated, Lena switched out the isotope for a fake and called the cops. In the confusion, Henshaw escaped again. Out in the stars, a pair of masked aliens continue their search for Mon-El with dubious intentions.

Luckily, the modified Medusa virus was so easily adaptable that it was able to target the White Martian cells in J’onn’s blood. The last son of Mars is back to his normal self, even if the procedure left him a little green. It also allowed the DEO to cure Mon-El, who claims convenient amnesia during his brief brush with death. Time will tell if he actually remembers kissing Kara or not but it appears to be a lie for now.

Relaxing back in her apartment, Alex is accosted by Maggie with pizza. The detective has been thinking since taking a laser. The fact that Alex came out to her family for Maggie terrified her but she wants to give them another chance. At least Maggie had the decency to knock on the door. By the time Kara gets home, a familiar pair of inter-dimensional travelers are waiting for her. Barry and Cisco have come to call in a favor.