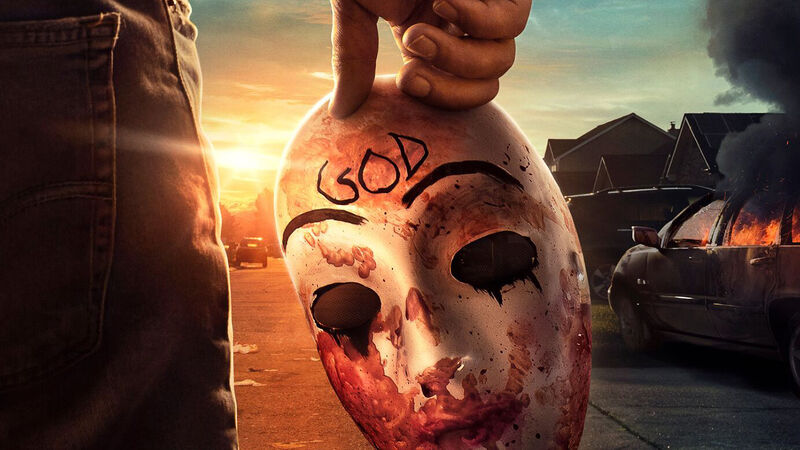 5 Ways People Adapt to The Purge

The Purge TV series returns to USA Network on October 15 with a brand new set of sinister stories set in the diabolically dystopian alternate America run by the fanatical New Founding Fathers.

Season 2 will be bookended by Purge nights, with the middle episodes tracking our new characters as they deal with the awful aftermath of the most violent Purge in history during the other 364 days of the year. Some will face harrowing mysteries. Some will be unable to escape the trauma they recently experienced. Others will uncover far-reaching conspiracies. But all of them have one thing in common: They’ll all have to go through it again in a year’s time.

So where did the idea come from to tell a Purge story about the time in between Purge nights? “It was totally the fans,” franchise creator and writer James DeMonaco told Fandom at NYCC. “They really just handed me the idea. At every Comic Con, and in a lot of interviews, I had people asking me,‘So what happens the day after?’ The big question after Purge 1 was ‘So how does Lena Headey’s character [Mary] interact with her neighbor, who tried to kill her, the next day? Three weeks later, how do they send their kids to the same bus stop? And where do the bodies go?’ You can’t do that in a movie. With the TV show, we have the real estate to tell this story.”

So how do you live in a society where something as awful as the annual Purge constantly looms in the background? How would you adapt to life and do your best to survive? How would you prepare for the Purge, knowing that it’s going to happen every year like clockwork? I asked DeMonaco, along with the showrunners and cast of Season 2, for their best Purge world tips.

Pondering the best decision to make while living amongst the Purge, DeMonaco remarked, “It’s almost an impossible question to ask, because imagining living in a society where this is real, it’s almost too nightmarish to think about.”

“My first answer is always that I’d leave the country,” he added. “And that’s either the silly answer, to go to Canada, or the real answer. Because to live in that type of world, you’d want to get far away.”

But would other countries be open to taking in Americans fleeing the Purge? “When it comes to going to other nations, it’s probably super hard for to get a Visa around Purge time,” executive producer Krystal Houghton Ziv said. “Because everyone’s trying to get out. And they also might see us as these violent Purge-loving Americans.”

Executive producer James Roland chimed in, “There was a pitch on the table too, that never made it onto the show, about how airfares would be astronomical. The NFFA wouldn’t want people leaving en masse. So there’d be these weird rules and regulations that would keep people in.”

So with leaving America possibly being tricky, what other options might there be? “I’d maybe try to go to the country,” Houghton Ziv shared. “I feel like the Purge movies are always very urban so maybe it’s a little safer in the woods. You can still get Purged there. You just have a better shot per square acre.”

BE NICE… EVEN IF IT’S FAKE

One of the storylines in The Purge: Season 2 involves Derek Luke’s character, Marcus, evading a killer on Purge night. Once he discovers the man was hired to kill him, and that there’s still a bounty on his head, he becomes desperate to find out why he’s a target. And he’s only got one year to solve this.

“That’s why I think Season 2 is so great,” DeMonaco said. “You have to look at everyone and ask, ‘Is there someone who will target me?” That’s what makes the Purge society unique. It’s a very polite society because you live in a world where there are repercussions for every single action. It makes for a falsely polite society. It’s false civility.”

Rochelle Aytes, who plays Marcus’ wife, Michelle, has definitely added “fake nice” to her list of Purge-world musts. “You have to be really good to people all year long so they don’t want to harm you,” she told me at NYCC. “It’s like the social media episode of Black Mirror where everything is paid off in likes. And the more likes you have, the better you can live. You always have to be pleasant, but it’s a fake nice. It’s never really genuine.”

Of course, the number one way people would prepare for an upcoming Purge would be to spend the year fortifying their home. Even DeMionaco, though he admits it doesn’t work out well for those in the movies, says it’s probably best to hide inside a secure place. “I’d try to make a lot of money and buy the best security system you can get,” he said.

Joel Allen, who plays the tormented Ben in Season 2 — who finds himself forever changed (in all the worst ways) after Purge night — took it a step further, stressing a need to spend the year creating layers of safety. “You need to keep your house tight,” he said. “But with the movies and the TV show, people keep making it through, so you need to have that extra layer, and extra weapons for safety. Like a trap door inside the bunker. It’s just like a nesting doll of safe rooms.”

Of course, the safest place to be on Purge night, perhaps, would be with the NFFA itself. One character this season, Esme, played by Paola Nunez, spends her night in an NFFA surveillance station watching everyone else Purge. “I broached this subject a little in Purge 3,” DeMonaco said, “where they’re in this grand cathedral having this Purge ceremony, with Kyle Secor’s character. In the movies, our guys breach the place, but if it were reality, yes, behind the walls of the NFFA would be the greatest safe room of all time.”

What if you could stay put during the Purge but somehow trick everyone into avoiding you?

“You’d need some YouTube videos of David Blaine, man,” Derek Luke said. “I’m serious. I think for a Purge you’d want to create the illusion of dying. I would try to contact that guy and say, ‘You gotta help me out.’ It would be interesting trying to escape the Purge, but somehow you’re still there and you’ve created a type of illusion for those trying to take you out.”

Nunez had a similar, but different idea, in which she’d just lay still, outside, and play dead. “What if you knew someone who was really good at makeup and horror effects?” she asked. “You could make yourself bloody. Because you’d want people to immediately think you’re dead. But also it would be incredible if the makeup allowed me to see from behind it, with my eyes open, so I could watch what was happening. I can see if someone’s coming but also I would like to see other stuff. Like the murders and the chaos. I could be in the Purge but be safe.”

Of course, everyone wants to fortify themselves behind barriers and wait out the night. But what if, no matter what, you’re forced outside? All the security systems in the world can’t help you.

What can save you then? Said Roland, “Cardio. You spend the year getting fit. Because people always wind up getting trapped outside in the franchise, so I’d say cardio.”

He added, “You have to be able to run for more than 20 minutes at least. You have to get in shape.”