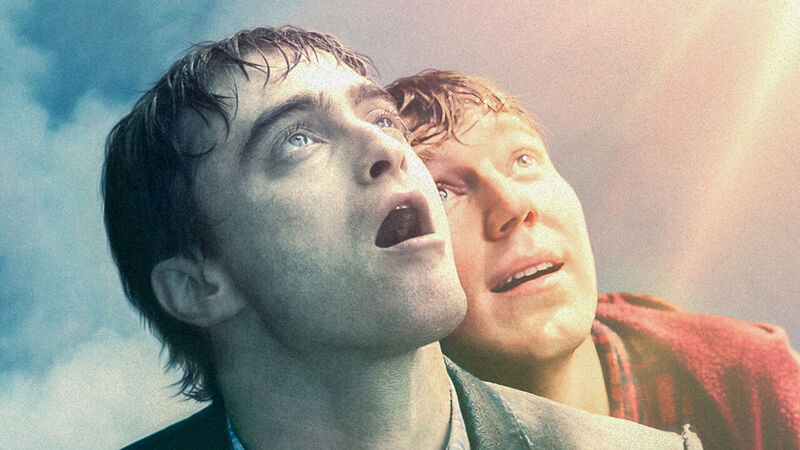 What is ‘Swiss Army Man’?

This weekend at U.S. cinemas is by far the most flatulent of the year. Steven Spielberg’s adaptation of The BFG brought giant farts to giant screens, but Swiss Army Man wins the fart contest by being the longest, most beautiful, and most heartfelt fart joke in cinematic history. Starring Daniel Radcliffe and Paul Dano, the film divided audiences at Sundance and SXSW earlier this year only to be picked up by indie powerhouse A24. The film was just given a summertime release in over 630 theaters across the nation.

Dano stars as Hank, a young man marooned on a small island in the Pacific. Just as he’s ready to call it quits and hang himself, he sees the body of another young man (Radcliffe) wash up on shore. As luck would have it, the corpse turns out to be an endless source of high-pressure flatulence. So Hank, in a genius bit of survival, pulls the body’s pants down and rides him across the Pacific like a farting jet ski. And before you ask — I’m not kidding.

Hank and the body eventually reach a distant shore somewhere in Northern California or the Pacific Northwest. Stranded in the wilderness with this violently flatulent corpse, Hank can’t help but form a close bond with the deceased, whom he calls Manny. Things change when Manny starts to talk, revealing himself to be a blank slate with no memory of the world and no concepts of decorum or social anxiety. Manny’s other talents make themselves known, which include (but are not limited to):

And throughout all of this, both Dano and Radcliffe are riveting and hilarious. Dano’s performance finds an anchor in deep sorrow and shame, but his moments of raw exhilaration make you want to whoop along with him. As the titular Swiss Army Man, Radcliffe shows his chops as a deadpan comedian and a great dramatic actor who’s only getting better. Manny is brimming with childlike curiosity. He is a vessel into which Hank can pour his knowledge and beliefs and insecurities. Together, the chemistry between our leads burns brightly. They’re both doing what could be their best work so far. Mary Elizabeth Winstead shows up in flashbacks and photos as Hank’s unrequited love. It’s great to have her around, even though she only flits through a handful of scenes.

Directing these great performances are Daniel Kwan and Daniel Scheinert, the guys behind that infamous music video for “Turn Down for What.” The writing/directing duo have taken to calling themselves Daniels. Together, their flair for the absurd and penchant for disarming images of the human body make Swiss Army Man something that feels wholly unlike anything else I’ve seen this year. Kwan and Scheinert have a lot going for them in Swiss Army Man, especially the skilled eye of Director of Photography Larkin Seiple. Seiple’s lighting and photography make sure that every fart looks impossibly beautiful in the woods of Northern California.

The film’s score, composed by Andy Hull and Robert McDowell (members of Manchester Orchestra) is one of the year’s best. Evoking the faux-sacred a-cappella harmonies of Brian Wilson and The Beach Boys, the score often features Paul Dano and Daniel Radcliffe singing the melodies. The score is also unique in that it acknowledges the on-screen actions of the characters in a meta fashion, even at times using lyrics to describe what we’re seeing. Sometimes we even see the characters singing the score. It’s yet another way the film acknowledges the absurdity of its premise.

In the end, that absurdity is what saves Swiss Army Man from falling into the quagmire of twee indie filmmaking and white guy ennui. The film is ultimately about a feckless white nerd who seeks acknowledgment and validation for his feelings. Swiss Army Man is not a subtle film, so all of this is said outright in the film’s dialogue scenes. So even though the movie veers into familiar indie white guy territory, the film’s crude humor and satisfying performances lend an odd truth to everything.

Whenever the film threatens to take itself too seriously, it reminds you that you’re watching a paean to the fart gag. It examines the reality that we are walking bags of gas and excrement. It also acknowledges that our heads are full of emotion, illness, pop culture, insecurities, and sincerely held beliefs that shape us and mess us up. Not everyone will find that universality and depth in Swiss Army Man, but if you’re looking for the best movie ever made about a flatulent corpse, look no further.