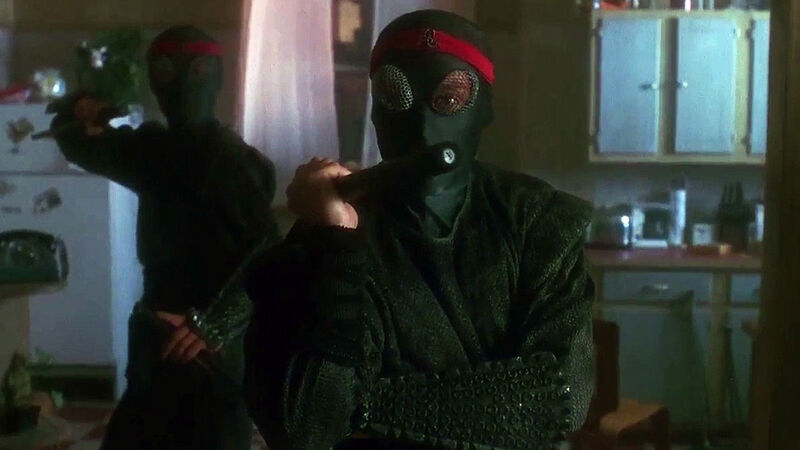 30 years ago, on March 30, 1990, the film Teenage Mutant Ninja Turtles opened and proved to be a massive success, cementing the Ninja Turtles as a pop culture powerhouse who were more than ready for their expansion into live-action.

Of course, where the Turtles go, the Shredder and the Foot Clan usually follow. This group of villains was depicted as ruthless Ninja warriors in the original black and white TMNT comics, while the popular late-80s cartoon imagined them as far less intimidating robot warriors under Shredder’s control.

However, the 1990 movie had its own take on the Foot, preserving the Ninja roots of the comics, but with the addition of the Foot undertaking quite a youth-driven recruitment initiative.

With that in mind, and in celebration of the 1990 TMNT movie’s 30th anniversary, here’s a look at an average day for the Foot, as depicted in that iconic film.

There are two basic levels inside the Foot hierarchy. The juvenile delinquents (let’s call then JDs going forward) who commit crimes — both of the petty and more dastardly nature — and the full members of the Foot Clan, who have been trained as ninjas. But all play a role when it comes to stealing property, and that work begins bright and early in the day. While a random JD is the first to take someone’s wallet, after that item has been passed to two or three or four other JDs in rapid succession, it eventually makes its way into the hands of a Foot Clan ninja. From back alleys to rooftops, New York has way more ninjas then you’d expect; they just do a decent job of not being spotted.

Anything from boxes in the back of a delivery truck to TV sets placed on fire escapes are fair game for the Foot and the kids working with them.

After a day spent committing crimes across the city, Team Foot reassembles at the east warehouse on Lairdman Island, at their headquarters/clubhouse. The huge amount of youths present has been accounted for in a big way, with the warehouse set up with a large skating area, video games, and even walls for those who wish to artistically express themselves via graffiti. You can crank the volume on some MC Hammer, you can play some guitar, and this place certainly doesn’t card either, as anyone can smoke and drink as they wish, regardless of age – or play a game of roulette if that strikes their fancy.

As the JD orientation leader – who sure looks like a young Sam Rockwell – will let any new recruit know, “Anything you guys want, we got it. Anything you wanna do, do it.”

But just because you’re in the warehouse doesn’t mean you necessarily are off the clock, as there is still plenty of sorting and inventorying to do as well, to go through all of those newly acquired illicitly-gained items. So grab some Burger King to keep you fueled up and start going over that loot!

The Foot Clan’s leader, Shredder, enjoys his TV time – so much so that he’s got a display of dozens of TV sets playing the same station, all at once. But what he doesn’t like to see on TV is anything that could be about his operations.

It’s important that any specifics about the Foot aren’t known publicly, which is why Foot Clan Ninjas are dispatched — at night if possible, but sometimes circumstances may require it earlier — to put a stop to any driven reporter who is getting close to the truth with her stories about how the recent crime wave in New York is reminiscent of a secret band of ninja thieves who once operated out of Japan. In retrospect, it would have been better if you’d kept the secret band of Ninja thieves more of a secret back in Japan, but there’s no use dwelling on the past.

Suffice to day, if you’re a Foot ninja, you need to be ready to be sent to a subway platform or an apartment over a secondhand store at any time to silence a reporter of that sort – along with i she might have, Ninja Turtles-included.

If you’re a wayward teen taken in by the Foot, not shockingly, you don’t have to worry about standard schoolwork. But there are still lessons to be learned during the night, as some of the older kids begin their very special training to become full-fledged Foot Clan ninjas.

Shredder’s right hand man, Tatsu, heads up the training and some would describe him as tough but fair… Well, maybe just tough. Okay, sure, he will sucker punch you after you do well against him in training, but look, it’s only to make you a better ninja, right? Never lower your eyes to an enemy!

While he doesn’t spend too much time with the recruits, and, unfortunately, hasn’t used the available ramps to show off any of the sick skateboard skills some secretly suspects he has, Shredder does make evening appearances in front of everyone, with all understanding it’s time to put a pause to anything else you’re doing when he’s there to speak.

Like a proud Dean of Students, he’s there to celebrate any newly inducted member of the Foot into the Clan, personally placing their Foot mask upon them for the first time. And you can count on Shredder to give an inspiring speech about the importance of effort, discipline, and loyalty – and how the Foot can stand united against these creatures, these turtles, that have been giving them so much trouble of late.

FINDING FAMILY… OR NOT

As a young Foot recruit, you’ve found a community of like-minded individuals, where you can share your interests, cultivate your skills, and enjoy stealing things together. You’re a family, just as Shredder tells you you are, with him serving as the proud poppa.

You stand united against your common foes, the Teenage Mutant Ninja Turtles, and nothing can stop that. Unless, late into the night, it’s a convincing, albeit brief, few words from a hockey mask-wearing vigilante and a talking, human-size rat who point out that maybe a dude who randomly beats you up when he’s pissed off about something you didn’t have anything to do with doesn’t have your best interests in mind.

But until such a day comes, enjoy that skate ramp!