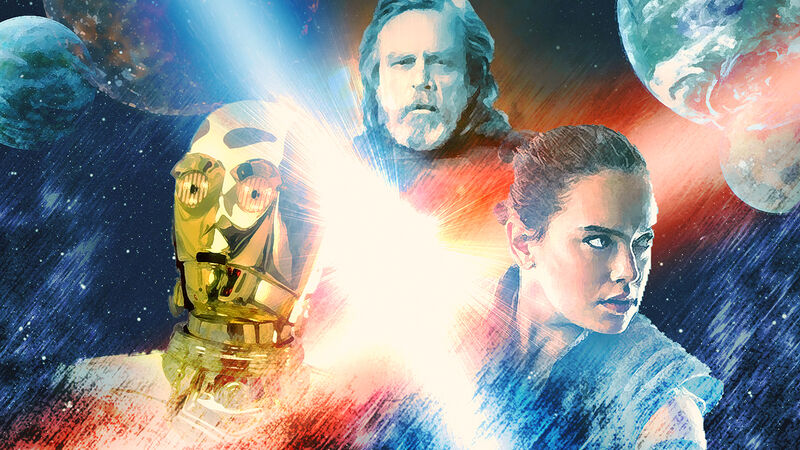 SPOILER WARNING: The following article contains SPOILERS for Star Wars: The Rise of Skywalker. Proceed at your own risk.

We know that The Rise of Skywalker is the end of the Skywalker saga, but it’s not the end of Star Wars — chances are there will still be stories told of a galaxy far, far away long after we’re dead and buried. President of Lucasfilm, Kathleen Kennedy, has claimed that there are no plans for Episode X right now, but then we got used to hearing that there would never be an Episode VII, and Kennedy herself is on record as saying the story group meets regularly to discuss the further adventures of Rey, Finn and Poe.

So, high-powered Lucasfilm executives and Star Wars fans alike, take a look at some of these ten suggested storylines that could one day form the basis of Episode X. These potential plots imagine the universe of Star Wars continuing post-Rise of Skywalker, so beware of spoilers. The following hypothetical storylines pick up and capitalise on loose threads, focus on underdeveloped characters and make real some of the best non-canon Star Wars Expanded Universe legends. We’ve also included thoughts from members of Fandom’s Star Wars community, Wookieepedia, on where a tenth episode could go.

Episode X: The One Where Rey Rebuilds the Jedi

In a way, come the end of The Rise of Skywalker, the Star Wars universe has done a full 360: the circle is complete, and we are poised to journey once again into an era of peace and prosperity. But that doesn’t mean the story is over.

Rey, now going by the name General Skywalker, is best positioned to bring together the universe’s best, brightest and most Force-sensitive citizens in an effort to bring about the return of the Jedi, to restore lasting peace throughout the galaxy. Granted, galactic harmony doesn’t exactly sound like fertile ground for drama, but wherever there is law and order, there are those who seek to profit from disorder and chaos.

The many crime syndicates and unsavoury individuals who sprung up during the reign of the First Order will not go quietly into the night — Benecio Del Toro’s Last Jedi turncoat, DJ, could return to rally the forces of Star Wars’ underworld, whose very way of life is threatened by General Skywalker’s new regime.

“I personally would like the next movie to not focus on a force-user, rather someone who was best friends with a Jedi and was jealous of their power and resulting fame. I think that this could be worked in with the controversial Canto Bight, taking the perspective of a former stable boy who was friends with the force-user shown at the end of TLJ. I think that this would add a nice change of scenery from what we’ve had so far in the main storyline, and having the change presented like this has been shown to work with the success of movies such as Rogue One and Solo. It would also serve to make the Canto Bight scene less of a “filler” because it would have a larger purpose in the series.” — Wookieepedia member, Chad Chipotle

Episode X: The One With Finn The Jedi

Poor FN-2187. Positioned as one of the key characters of the new Star Wars trilogy, Finn turned out to be little more than a plucky Resistance fighter with some skill in the Falcon‘s gunner seat. Those kinds of dudes are ten-a-penny in the Resistance, guys! That’s why they’re the Resistance!

However, The Rise of Skywalker ends by suggesting Finn is Force-sensitive, which makes total sense given past actions (Kylo recognising him as a Stormtrooper in The Force Awakens; Finn knowing when Rey has ‘died’), and it’s by far the most interesting thing to happen to him all trilogy. So let’s start another series of movies with Finn at its heart: the former Stormtrooper-turned-resistance-fighter-turned-Jedi-legend, righting wrongs throughout the galaxy and bringing some South London style to the Outer Rim.

Episode X: The One With The Love Triangle

One story thread that was introduced, toyed with and then very much abandoned by the new trilogy was the romantic relationships between Rey and Finn, and Finn and Rose, neither of which bore interesting fruit. In The Rise of Skywalker, when Finn thinks he’s about to die, he claims he has a secret to tell Rey… but then never discloses it.

Rose, on the other hand, barely shares a scene with Finn in Episode IX, leaving their lingering kiss at the end of The Last Jedi unexplored. Maybe with Kylo Ben finally out of the picture, Episode X is the perfect opportunity to pick up this thread again: Rey, Finn and Rose defeated Emperor Palpatine and the Sith, but can they defeat their feelings for one another? What was Finn’s big revelation? Also, why is Poe watching all of this from the sidelines, biting his lip? What’s the deal there?

Episode X: The One With Jannah and Lando

One of the most intriguing new character dynamics in The Rise of Skywalker was introduced right at the death, with ex-Stormtrooper-turned-resistance-fighter, Jannah, meeting old smoothie, Lando Calrissian. When Jannah reveals she doesn’t know who or where she comes from, Lando simply says with a smile: “Let’s find out.”

Adventures ahoy! From what corner of the galaxy did Jannah hail? Is there an ex-Stormtrooper support group out there? Was it destiny that she met the Resistance when she did? Does Lando know more than he’s letting on? Star Wars excels at journeys of self-discovery, but all too often they resort to cheap reveals of bloodlines and lineage — how about we explore some corners of the galaxy we’ve never been to before with characters who aren’t Skywalkers, Solos or Palpatines?

Episode X: The One Where Maz Kanata Explains It All

The character of Maz Kanata has been frustratingly flighty throughout Episodes 7-9. In The Force Awakens, she decides that the story of how she happens to own the lost lightsaber of the most powerful Jedi in the galaxy is one for another time, and that time sadly never comes. In The Last Jedi, we see a holo-vision of her fighting off unseen adversaries for unknown reasons. Finally, in The Rise of Skywalker, she appears to have knowledge that Chewbacca never received his medal after the destruction of the Death Star.

Out of all the characters and creatures introduced in the post-Jedi trilogy, Maz seems to possess more information than most. A join-the-dotted-lines movie following Maz throughout the events of the entire Skywalker saga might not make for a particularly enticing Episode X but it’d certainly tie up a lot of the loose threads left dangling.

Episode X: The One Where The Jedi All Live In Rey’s Head

“Come to me,” pleads Rey to the lost Jedi at the end of The Rise of Skywalker. “Be with me.” And turn up they do: every Jedi in Star Wars canon makes a vocal appearance in Rey’s vision, from Qui-Gon Jinn to Obi-Wan Kenobi to Yoda to Mace Windu to Kanan Jarrus to Ahsoka Tano.

It’s a cool ability to have, to be able to summon the wisdom of the greatest minds of the galaxy, but Rey’s consciousness is liable to get pretty crowded, packed arse-to-elbow with half the Jedi council like some mad flat-share comedy. What kind of toll does that collective responsibility take on a person? What if Rey was so overwhelmed by the Jedi’s accumulated conscious that she rejected its philosophy? And what if this was what her grandfather, Emperor Palpatine, had been counting on the whole time?

Episode X: The One With Rey’s Parents

First things first, hypothetical Episode X: please explain to us how Chancellor Sheev Palpatine, big shot Senator of Naboo before he was The Most Evil Guy In The Galaxy, managed to have children and keep them secret? Next, can we please learn a little more about Rey’s mother and father? Because a story revolving around the renegade children of an evil Emperor sounds awesome — especially if we can keep Jodie Comer in full Villanelle mode as Rey’s badass runaway mum. It’d expand on the Palpatine bloodline, fill in some blanks on the timeline and give us new heroes to root for — even if we know they’re already done for.

Episode X: The One With The Yuuzhan Vong

If the Galactic Empire, the First Order and the Sith Lords are all defeated, who provides the threat in the ongoing Star Wars universe? Why not look to the non-canon Star Wars Legends expanded universe for clues?

The villains in all manner of Star Wars EU novels and comics were the Yuuzhan Vong, a brutal race of bio-engineered extragalactic invaders who wore armour that could deflect lightsaber blades and, crucially, could not be detected by the Force. Who better to prey upon a universe now pacified and purged of all war? It’d be a new beginning for the Star Wars universe and a grand threat for Rey Skywalker, Finn the Jedi and General Poe Dameron to square off against.

“I don’t think we’ll be getting ‘A Star Wars Story’ on the big screen for a while. I think lots of those singular stories will make their way to Disney+ as TV. As for an idea I’d like to see, the continuation of the Crimson Dawn storyline [seen in Solo: A Star Wars Story]. Although I have been thoroughly enjoying The Mandalorian, it has not been as dark and gritty as I’d initially thought it would be. A Crimson Dawn show set in the criminal underworld has the potential for this imo.” — Wookieepedia user, ArchieKE

Episode X: The One With All The Kenobis

A permanent presence throughout the original trilogy and the prequel trilogy, the lack of Obi-Wan Kenobi in the new movies was noticeable, save for a few Force flashbacks and muttered visions. With a Disney+ spin-off starring Ewan McGregor already confirmed, we’re about to learn so much more about what Old Ben got up to before his days as a hermit.

Could it be that he wasn’t as closed off from the Force as he claimed? Is it possible that he took a wife and had children, and that the Kenobi bloodline lives on post-Skywalker saga? Would you watch a movie about the Kenobi Kids? Could any offspring ever hope to own quite such a luscious beard? Yes, yes, yes, yes and no.

Episode X: The One With Rey’s Kids

Let’s not wait another three decades for a new trilogy — how about we fast forward the next 30 years and skip straight to the next generation of Star Wars heroes? Much like the way Shmi Skywalker fell pregnant with Anakin without a father, it’s not inconceivable that Rey could have managed to conceive twins through her reciprocal bouts of Force healing with Ben.

The children of Rey and Ben would cross the bloodlines of the three major Star Wars families: they’d be of Skywalker, Solo and Palpatine stock, and therefore the most Force-sensitive beings ever born. As per the duality of the Star Wars universe, one would inevitably lean towards the light side, and one towards the dark. Brother and sister fighting for control of the galaxy, you say? Where do we sign?