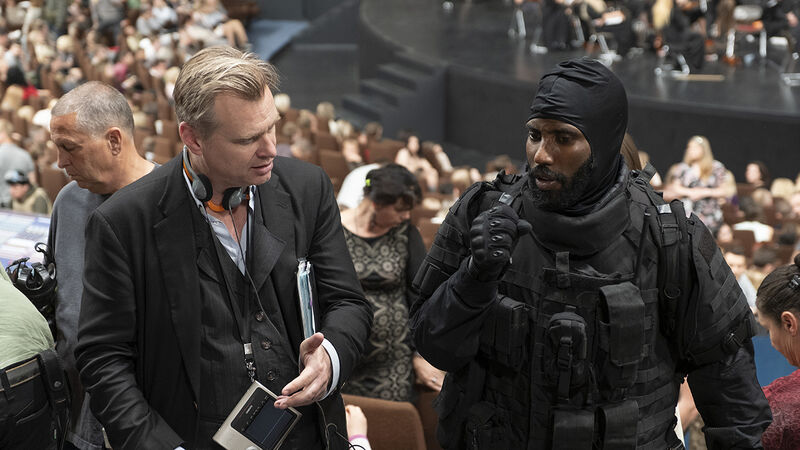 If, as you’re watching Tenet, you’re struck by an urge to compare what you’re seeing to the Season 3 premiere (“Backwards”) of British sci-fi comedy Red Dwarf, it wouldn’t be misplaced. Not that writer-director Christopher Nolan cites it as an influence, but the concept of time travel as depicted in both isn’t dissimilar. And you might wonder if the episode stuck in his brain, watching it as he might have done as an impressionable youth.

In the thirteenth Red Dwarf instalment, Arnold Rimmer et al pass through a ‘time hole’ and find themselves on a future version of Earth where time is running in reverse. Rimmer and sidekick Kryten take advantage of their ‘forwardness’ while marooned there, while space-travel companion Dave Lister finds himself caught up in a backwards bar fight – after suffering the after-effects before it takes place — and Cat struggles with the notion of what happens when you need to take a bathroom break.

Thirty-one years after that episode first aired, Tenet explores similar territory — what it would be like if a way to time travel were discovered meaning that the action took place in reverse. Christopher Nolan recently spoke about his interest in the concept at a press conference to promote the release of Tenet, and how it’s been bubbling away in his brain for “decades.”

“There’s certain images and certain devices in the film that I’ve been thinking about for a long time — you know, decades, really,” he said. “People who know my earlier work or recognize some of the tropes, like the bullet coming out of the wall and going back into the gun, [will know] it’s something that’s portrayed metaphorically, or used for metaphorical purpose, in [my 2000 thriller] Memento. But here, we try to actually make it concrete, make it a real thing. I’ve been playing around with some of these ideas for a very long time, this particular script and the idea of taking the spy genre and really trying to use it as a vehicle for taking the audience on this journey, through all of these bizarre concepts of time. We’ve been working on that for about six or seven years in specific terms.”

In that time, Nolan says, he was mainly working on crafting an engaging spy story, and finding ways to reconcile the concept of time travel he wanted to explore with the story, and more widely, genre.

Tenet focuses on a character called the Protagonist (John David Washington), who is recruited from the CIA into a mysterious organization hellbent on preventing a global threat. The premise might sound familiar. Nolan admits to being influenced by classic spy film, 1977 Bond adventure, The Spy Who Loved Me, and you’ll detect 007 DNA while you watch.

The Influence of James Bond

“The first James Bond film I remember going to the cinema to see was The Spy Who Loved Me with Roger Moore, and that still is a great favourite of mine,” said Nolan.

He watched the film again recently with his children.

“That’s a film that … you can sort of tap back into the early experience,” he explained. “I think I was about seven years old when I saw it, and I went with my dad to the cinema to see it. What I remember, and what I’ve tried to retain from that experience is the feeling of possibility that you could jump through that screen and go anywhere in the world and see the most amazing things. It had such scale and such possibilities. It was pure escapism and [had] an excellent fantasy component to it as well. You know, the car that turns into a submarine and all that stuff. And I think I spent a lot of my career trying to get back to that feeling, and trying to give that feeling to audiences — taking it back to that sense of wonderment about the possibilities of what movies can do and where they can take you.”

In terms of other influences, Nolan references artist MC Escher and prints of the endless Penrose Steps – which made an appearance in Inception – rather than, say, philosophers or other movies like some directors might.

“I tend to think in diagrammatic terms when I’m writing and try and lay out directions of time and how they might fold in on each other and so forth. So I’d actually cite Escher as a main inspiration on the [Tenet] script, actually.”

Tenet is far from a straightforward spy thriller. As with Nolan’s other films, you’ll see spectacular stunts of the kind you’ve never witnessed before. On this scale, at least (Red Dwarf’s backwards bar-room brawl didn’t benefit from a Christopher Nolan-sized budget). The fight scenes in Tenet are pretty dazzling.

“The complexities of fighting that this concept of inversion of time presents were clearly going to be an important part of the story,” Nolan said. “And so I sat with the stunt team very early on — George Cottle, our stunt coordinator, and Jackson Spidell, our fight coordinator. We looked at a lot of different fight moves and how they can be manipulated through time and over time. And we actually had a very intensive rehearsal period.”

As with films like The Matrix and John Wick, known for their groundbreaking fight sequences, combat scenes have a balletic quality made all the more dance-like with the introduction of the backwards movement — some of which you can see in the trailer. It comes as no surprise to discover that Nolan also consulted dance choreographers.

“The physical choreography of the film was one of the things that we approached first and spent a lot of time [on] in prep, working with very talented stunt people as well as some dancers, looking at dance choreography and how that could inform things. We really put a lot of care and attention to it because we felt that the physical movement, the physicality of the piece — the Protagonist is an extremely physical character as is [Robert Pattinson’s] Neil – [was so important] … It felt like if we could crack that — and we’d start with the scenes in the vault where there is hand-to-hand combat — and crack how we approach filming that, the rest of the film would start to fall into place.”

John David Washington, who also spoke at the press conference, credited his sports background for helping him master the moves.

“Being an American football player, it’s very familiar to me to rehearse, to practice, the repetition … to where it becomes a familiar body language,” he said. “They say amateurs practice ‘til you get it right, professionals practice so you can’t get it wrong.”

Robert Pattinson, who plays enigmatic British operative Neil in the film, had this to say of Washington: “I just remember watching John David the first week. It’s some of the most extraordinary physical work I’d ever seen any actor to do. And then to see the movie at the end and just think his performance in every other aspect of it is so brilliant … so wait, you’re like Bruce Lee as well? It’s actually quite stunning. There’s not a lot of people in JD’s category at the moment.”

Tenet hits screens in the UK on August 26, and in the US on September 3.