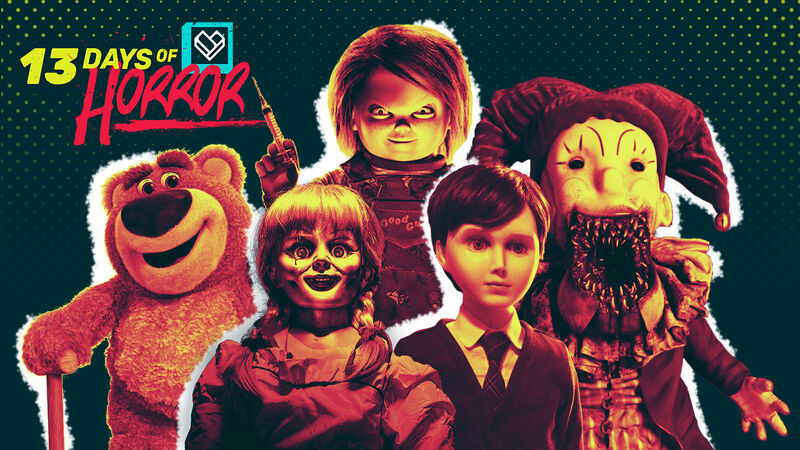 The 10 Scariest Dolls and Toys in Movies

“Another things about a shark, he’s got lifeless eyes, black eyes, like a doll’s eyes…” When one of the most feared monsters in movie history, Jaws’s Great White, is compared to a doll, it should really make you question the general appeal of these most common of kids’ toys. Perennially popular yet eternally creepy, it’s no wonder that horror filmmakers have played on their inherent uncanny valley-ness, and childhood fears, to make haunted dolls and toys a genre staple. Here are ten of the best. Just BEWARE OF SPOILERS AHEAD.

Tobe Hooper’s/Steven Spielberg’s (delete as your rumour mill fancies) canny haunted house movie update plagues its sunny California suburban family the Freelings with all sorts of evil spirits. The ghosts in the TV machinery get the most-quoted tagline — “They’re here…” — but for sheer jump-scare effectiveness, nothing beats young Robbie Freeling’s clown toy. One moment he’s sitting on the chair opposite your bed grinning at you; the next, he’s behind you, trying to throttle you with those freakishly extendable arms. Clowns: crying on the inside, while you’re screaming on the outside.

“Do you like toys?” asks the creepy old toymaker in the creepy old mansion on the creepy stormy night during which he takes in a bunch of stranded tourists. The late 1980s were the heyday of moviesx about possessed playthings (see below, or Puppet Master), and Stuart Gordon’s droll doll morality tale, with the souls of nasty folk imprisoned in the toymaker’s creations, has a lot of fun with various familiar figures. There’s Mr. Punch and a mutant giant teddy, but we’re partial to the wooden toy soldiers who turn into a crack shot firing squad.

The big cheese of cinematic devil dolls, Chucky is now basically the plaything version of A Nightmare on Elm Street’s Freddie Kreuger: the sinister villain of an unexpected horror hit that spawned a spate of increasingly tongue-in-cheek (and meta-)sequels and turned its antagonist into a wisecracking anti-hero. Not that this first outing plays it straight — a serial killer using voodoo to transfer his soul into a Cabbage Patch Kid wannabe is hardly Psycho territory to start with — but it’s a far cry from later spoofy, goofy entries, now seven and counting, with a reboot in development.

Lucky McKee’s artful indie has deservedly become something of a cult item. It’s a plaintive, disturbing study of loneliness that charts a damaged young woman’s homicidal descent, laced with wicked humour. Inspired by her birthday gift of a glass-encased, ghostly-faced doll, Suzie and her mother’s adage, “If you can’t find a friend, make one,” May (an outstanding Angela Bettis) makes these ideas gruesomely literal, stitching together ‘Amy’, a more lifelike replacement for spoiled Suzie, using… well, take a playdate with May and find out. But you’ll never look at a patchwork doll the same again.

Why should kids have all the fun? Though initially made for his unborn (and then, tragically, stillborn) son by Jigsaw killer John Kramer, little puppet Billy regularly gets to play with the assorted unfortunate adults forced into Jigsaw’s life-or-death traps, either announcing their fates on grainy video, or, occasionally, gracing them with his dapper tuxedo/bow tie/gloves combo presence. In truth, Billy has little direct involvement with Saw’s elaborate torture contraptions. But he’s become popular enough to act as the neverending, insanely convoluted franchise’s mascot, presumably because a bear trap facemask isn’t quite as appealing.

A furry, strawberry-scented CG teddy bear from a family blockbuster on a Horror list? Pixar’s masterful series had previously featured a doll nemesis (Toy Story 2’s Prospector), but the finale’s Big Bad is something else: a vindictive monster who takes out his own rejection torment on others, turning a nursery into a totalitarian prison. Lotso is responsible for the entire series’ most horrific moment, ruthlessly dispatching heroes to a fiery doom (before a magical claw ex machina rescue) moments after they saved his life. And he’s all the more frightening by concealing his twisted nature beneath that child-friendly, avuncular façade.

So far the Annabelle films are like a collection of nested Russian dolls, each one set further back on the timeline and exploring just where, why and how the spooky, grinning doll with the needle eyebrows, rouged cheeks and penchant for playing vintage records at the eeriest moments, came to be. They’re all familiar tales of possession by ghastly ghouls, but the filmmakers bank on that blank face and glassy stare to convey much of the malevolence. So far, box-office success means that — seriously — an Annabelle Cinematic Universe awaits.

He’s making a list, he’s checking it twice, he’s going to find out who’s naughty… and, well, that’s it, basically because anyone getting a Xmas visit from this evil European goat-demon and his minions is in for a ho-ho-horror show. One special Krampus gift: a wind-up music box unleashing a jester-outfitted clown with razor-sharp teeth reminiscent of It’s Pennywise. Der Klown’s first victim is cornered outside in Krampus’s eternal winter. But it really comes into its own in the family attic, metastasizing into a giant worm-like creature that can swallow kids whole. Merry Christmas!

As many of the previous entries here prove, possessed dolls are a horror movie specialty. The Boy plays on this trope, with an American nanny (The Walking Dead’s Lauren Cohan) hired by an old, eccentric English couple to look after their young son, Brahms – who is a small porcelain-faced doll that still has a list of requirements, including regular feeding, music and companionship. When Brahms seemingly starts to move and act up, nanny fears that he’s somehow real – and the film sets up to subvert certain genre conventions, while adhering very tightly to others.