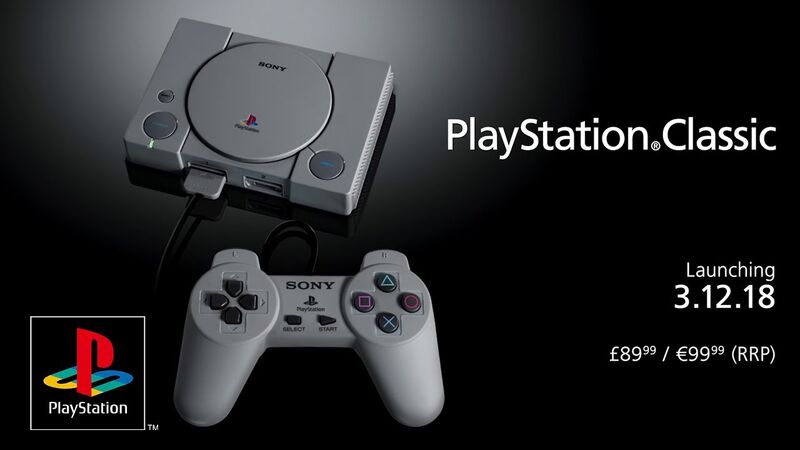 The 15 Games That Need to Be on the PlayStation Classic

In a move that has shocked absolutely no-one, Sony has waded into the ‘mini-console’ market with the PlayStation Classic, following in the footsteps of Nintendo’s extremely popular (and terribly scarce) NES & SNES Mini.

The 45% smaller console will retail at £89.99/$99.99, with two classic controllers in the box that have been stripped of the DualShock analogue sticks to really bake in that nostalgic feel.

Strangely, Sony decided to announce a paltry five of the 20 games coming to the system in the reveal trailer. So far, we have Final Fantasy VII, Ridge Racer Type 4, Jumping Flash, Tekken 3 and Wild Arms. With 15 left to be announced, we decided to do some theory crafting on what essential games are currently missing from the PlayStation Classic line-up.

Come on, you knew this one was coming. As one of the games heard in the same breath whenever the PlayStation is mentioned, Hideo Kojima’s Metal Gear Solid still stands up as a defining moment in the history of video games, characterizing the stealth genre and breaking narrative boundaries.  Proving that games could tell stories every bit as bombastic as your high-concept Hollywood thriller, it’s no exaggeration to say that this 1998 classic raised the bar for storytelling in interactive entertainment. This one is pretty much a dead-cert, but the real question is, what will Psycho Mantis find on our memory cards this time around?

Whilst we’ve already seen the polished return of Crash Bandicoot with the PS4’s N.Sane Trilogy, the immensely popular racing spin-off is still famously missing the remaster treatment. Until that day comes, it would be great to go hands-on with one of the finest racing games of the period. With two controllers in the box, this game is a natural fit, but even if you’re solo, you can enjoy one of its best innovations, the experimental ‘Adventure Mode’, a clever open-world story housed within a racing game.

A foggy psychological horror vignette that is still unnerving to this day, Silent Hill is one of the most revered survival horror titles ever made. Its impregnable plot and eerie, Twin Peaks-inspired soundtrack bores its way into the player’s mind, making for an unforgettable introspective experience. Its notoriously hard to pick up and play it nowadays beyond the out-of-production PS Vita, meaning a re-release on the PlayStation Classic would be the perfect way to get to grips with it if you missed it in 1999.

Easily one of the most inventive titles to grace Sony’s first console, Ape Escape was an instant hit with its satisfying haptic controls and charming, wonderfully absurd tone. Chasing cheeky, pop-culture inspired monkeys with a net has never been so satisfying. Whilst there is a sticking point here (the current controllers don’t have Analogue sticks), hopefully, Sony will allow for Bluetooth and make a compromise so that it can bring the much-loved game back into the public eye. Who knows, if it gets a good response on the PlayStation Classic we could even get a sequel!

Whilst skateboarding games have gone the way of the dodo in the current console generation, there was a time when they were all the rage in the late 90s and early 2000s. Tony Hawks Pro Skater 3 was the second last entry in the series to release on the original PlayStation, marking a wonderful mid-point between generations which led to refined arcade gameplay and the ability to skate in iconic locations, from Calgary to Rio. Also, as far as the much-loved novelty characters go, you can’t really top busting out kickflips to “96 Quite Bitter Beings” as Darth Maul…

You may have noticed that Sony has already released a pretty successful Spider-Man game this year, so it only makes sense to take players back to where Peter Parker got his first big break on the PlayStation 1. The delightfully silly plot is ripped straight from the comics and packed to the brim with fan service and famous faces. The simple but effective minute-to-minute gameplay of Spider-Man also holds up pretty well, and its narrated by none other than Stan Lee! What more could you want?

Whilst the original 1996 Tomb Raider was a landmark moment in the history of adventure games, the second instalment resolved some of the quality-of-life teething issues of the first title and worked out the difficulty kinks, following Lara as she travels the world to find the illustrious Dagger of Xian. Really though, all we want to do is mess about in Croft Manor and lock the butler in the freezer again. Make it happen, Sony.

The first in a now bustling genre, PaRappa the Rapper was the original rhythm game, and still stands out as one of the most unique titles in the genre. Exploding onto the scene with its catchy rap tunes and unforgettable paper-thin visual style, this is a timeless game that would fit perfectly on the PlayStation Classic and introduce a whole new wave of gamers to its absurd world. Chop chop, Master Yoshida.

Whilst we wait for the terrifyingly pretty remake dropping early next year, it would be great to return to the far more polygonal original to appreciate its origins. Still retaining a palpable atmosphere 20 years later, Resi 2 was one of the first and most effective early cinematic video games, building on the groundwork laid by the original Resident Evil. An undeniable survival horror triumph, it gave the world Leon Kennedy, which is enough on its own, to be honest.

Cut from the same cloth as Resident Evil, Dino Crisis is another Shinji Mikami directed game that ramped up the pace by switching out sluggish zombies for ravenous raptors. T-rex jump scares aside, Dino Crisis was a tremendously fun twist on survival horror, sending you reeling through claustrophobic corridors to evade Jurassic jaws. Unlike Resident Evil, Dino Crisis is a series that is currently lost in time and deserves to be thrown back into the public eye. Who knows, maybe a positive response will coax out a well-deserved follow-up. Go on Capcom, you know you want to.

This woefully hard platformer deserves a spot on the console mainly so that parents can show their Rayman Legends loving kids just how rough it was back in the day. Besides the punishing difficulty though, Rayman stands out for its inspired character designs and gorgeous 2D worlds that are still a delight to lose yourself in to this day. Just make sure you have a lot of patience, and a couple of replacement controllers knocking about…

Castlevania: Symphony Of The Night

A cult classic that needs no introduction, Castlevania: Symphony Of The Night is a favourite amongst critics and fans. Commonly referred to as one of the best games ever made, Symphony is a meaty title that masterfully combines side-scrolling platforming with RPG elements, set against a compelling non-linear backdrop: Count Dracula’s Castle. Symphony’s success helped popularize the genre of Metroidvania, and with games like Dead Cells and Hollow Knight still cropping up and performing well in over 20 years later, this would be an enticing addition to the roster for fans looking to see the origins of the genre.

Another game that spawned an iconic series, Abe’s Oddysee was a groundbreaking 2D platformer that utilized pre-rendered 3D to craft an enrapturing, oppressive world. Developers Oddworld Inhabitants brought the brutalist, apocalyptic setting of RuptureFarms to life, creating a character in Abe that you instantly wanted to root for, even if it meant selflessly saving a remarkable amount of Mudokons with the unique command system, GameSpeak. Undoubtedly a PlayStation Classic.

It wouldn’t be a PlayStation console without paying homage to the best selling sports franchise in video games. FIFA found its feet on PlayStation at the turn of the century before becoming the worldwide sensation it is now. 2003 introduced the delightful Freestyle Control system and marks a ‘Goldilocks Zone’ in the franchise where the graphics and animations aren’t so unapproachable for modern gamers. The features are also fleshed out enough to retain the unbeatable one on one match-ups and the addictive career mode that the series is known for.

Created by Spyro Reignited Trilogy developers Toys for Bob in 1996, Pandemonium! is a stylish 2.5D platformer with a memorable fantasy aesthetic where you play as Jester and Sorceress duo Fargus and Nikki. To save the world from an evil spell you have to master the distinctly acrobatic platforming and mostly, run like the wind from a variety of increasingly evil traps. As obstacle-based platformers go, this was one of the PlayStation’s finest and a colloquial hit among those who grew up playing it. This would be a crowd-pleasing, light-hearted addition to the roster, ensuring that there is something for everyone on the PlayStation Classic.