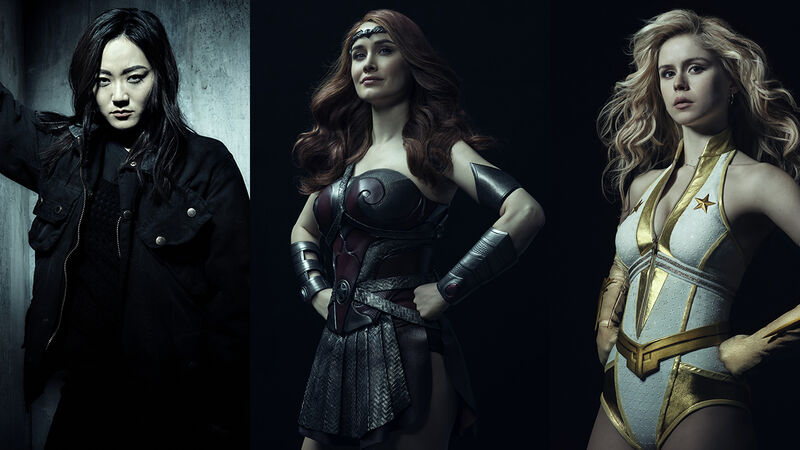 Don’t Mess With The Girls of ‘The Boys’

Warning: The following contains SPOILERS for The Boys Season 2 through episode seven.

With Stormfront joining The Seven in The Boys Season 2, the PR team at Vought International started spinning overtime, hyping the historic addition with a “Girls Get it Done” media tour in order to draw attention to the super-group having three female members for the first time.

Of course, the series presents this buzz as the kind of hollow, money-grabbing ploy that Vought specializes in. On top of this, Stormfront is secretly a psychotic Nazi who’s whipping up a xenophobic frenzy in the country so she can get Compound V injected into adults with the purpose of creating an Aryan army of Supes. So maybe we don’t want this girl to get anything done.

That being said, scathing satire aside, The Boys has some wickedly great female characters with various axes to grind and as we head into the Season 2 finale, these women are on a mission. Some seek justice while others are out for revenge – but all of them are not to be messed with!

As we head into Season 2’s finale, here’s where things stand for several key female characters, all of whom at least probably agree on one thing: Stormfront sucks.

Who She’s After: Vought International

Trying to take down Vought and The Seven is a near-impossible task, even when you’ve got the inside track. Starlight’s big play, to reveal the existence of Compound V to the public, backfired big time when Stormfront used Kimiko’s brother Kenji to create a swell of racism and hate in the U.S. that distracted from the news.

But now Starlight and Hughie are on the same page and both know about Vought’s plans to stabilize Compound V in adults. In the wake of the House Committee massacre, what will Starlight’s next move be? She’s already been labeled a traitor by Homelander so now she’s on the run just like The Boys are. She’s got a bone to pick with Homelander, Stormfront, and — basically — all of Vought. As a member of Butcher’s crew now, will Starlight become the hero she’s trained her whole life to be?

Who She’s After: Stormfront

From a feral captive in a cage to a mourning sister caught in a rage, the super-strong Kimiko’s had a rough go of things. She’s naturally out to take down all of Vought like the rest of her team but with Stormfront, things are ultra-personal. Will Kimiko be able to act, and not freeze up, the next time she sees the fascist Supe who viciously murdered her brother?

There’s no doubt Kimiko is a formidable force, of course. To assuage her guilt, in the wake of her brother’s death, she started doing contact killings, peeling mobsters’ faces off with grotesque ease. Will she be able to rip Stormfront limb from limb, if the situation presents itself? For the sake of the world and for the memory of Kenji?

Who She’s After: Homelander and Stormfront

Becca doesn’t possess any superhuman abilities but after Homelander and Stormfront took off with her son, Ryan, she’s become a mother possessed. She was already strong enough to refuse Butcher’s rescue, knowing that he never intended to keep or protect the boy.

Clearly, Ryan’s her number one priority over everything else and now, after trying to play nice with Homelander, pretending to be a “happy family” for the sake of her son’s safety, she’s been betrayed and shut out. And then there’s Homelander’s girlfriend, Stormfront, who’s righteously ready to become Ryan’s “new mom.” Obviously, this can’t stand, but what can Becca do? Whatever it is, it better happen quickly. A mother’s love is not to be trifled with. Becca just might be stronger than any of us realize.

Who She’s After: Homelander

How long can Maeve sit on the sidelines? Unlike the other women on this list, she has no real interest in dismantling Vought or the group she belongs to, The Seven. She would, however, like to dispatch and dethrone Homelander, her leader, who’s been tormenting her for years – first forcing her to live a lie and now forcing her bisexuality out into the public on his terms while also cruelly controlling her relationship with Elena.

Maeve’s attempt to blackmail Homelander, using The Deep to unearth footage in the ocean of the Season 1 plane she and Homelander abandoned, went down in flames when Elena saw it and promptly left her. Now Maeve’s hit an all-time low and her loyalties seem all over the place. After stepping up, stepping in, and saving Starlight from Black Noir (by poisoning her silent, lethal teammate with an Almond Joy) can Maeve be counted on for the big fight ahead?

Who She’s After: Vought International

Congresswoman Victoria Neuman is out there taking huge risks in the name of America. As a very public figure waging war on Vought and its crazed corruption, she’s placed a big target on her back for any Supe out there with ties to the company who might want to take her off the game board.

After the shocking and bloody massacre during the televised trial, which claimed the lives of dozens (including star witness Dr. Vogelbaum ), Neuman’s headspace is probably a swirl of fear and anxiety. Will she waver in her mission to topple Vought, after coming so close to getting taken out, or will she now double-down on her efforts to end Vought’s chokehold on the country?