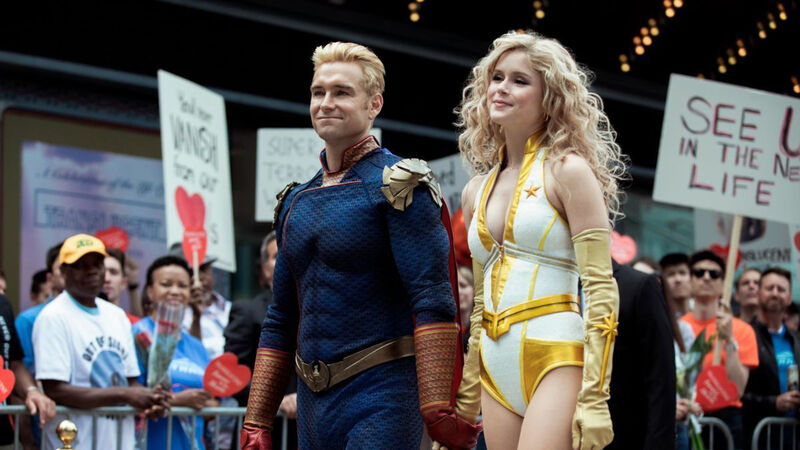 ‘The Boys’: The Most Shocking Moments in Season 2 So Far

Warning: The following piece contains full spoilers for the first four episodes of The Boys Season 2!

With four epic episodes down, The Boys is halfway through its Supe-busting second season and Billy Butcher and his crew might have just stumbled onto a bigger threat to the world than Homelander!

Yup, we knew Stormfront was going to be a thick thorn in everyone’s side but it turns out she’s got an even more diabolical plan than anyone anticipated. As a full-fledged hate-spewing, fear-mongering racist, who ruthlessly took a bunch of innocent lives right before she murdered Kenji, Stormfront is raising an army of supporters for her awful xenophobic agenda. And it’s a plan that she’s probably been crafting for decades as a Compound V subject who apparently also ages at an alarmingly slow rate – and may have gone by the name Liberty back in the 60s and 70s!

At this point in the story, at the end of the Season 2 premiere, the last thing the Butcher-less Boys needed was one of their precious and rare allies to get her melon blown to bits. But that’s exactly what happened when Hughie, Mother’s Milk, Frenchie, and Kimiko contacted CIA Deputy Director Susan Raynor for intel on a Supe-Terrorist at large.

Right as Raynor started talking about a possible “coup from the inside” at Vought International — POP! — her head exploded, covering the curious crew with an ample amount of blood and brains. In a few episodes’ time, our heroes would start to suspect Stormfront as being the mystery assassin.

What wound up being more of a surprise? The fact that the esteemed founder of Vought International, Dr. Frederick Vought, was an escaped Nazi scientist who was brought to America, under the protection of the U.S. government, to continue his work on human subjects, or the fact that it managed to remain a secret from the public and media for almost 80 years?

Yes, when Homelander went straight to Stan Edgar to complain about Stormfront joining The Seven, Mr. Edgar gave Homelander a heinous history lesson about the company’s one true asset – Compound V. Now, with everything we’ve learned about Stormfront, it seems like she may have even known Dr. Vought herself, and bought into his vile ideologies.

In Season 2’s second episode, we found out that the telekinetic baddie being tracked down by The Boys (with Billy Butcher being promised his wife’s location in return) was actually Kimiko’s brother, Kenji!

The super-close siblings had grown up orphaned and in the grip of Shining Light, a supposed terrorist organization linked to creating Supes overseas. Kenji is the only person able to communicate with Kimiko as the two of them developed a personalized form of sign language after she stopped speaking.

Power to the People

Though it put a tremendous amount of emotional strain on them both, Hughie and Starlight managed to get a sample of Compound V out to the news – making it public knowledge that Supes were made in a lab, not born and blessed with divine purpose.

It was a huge win for Team Boys, though their celebration, and Vought Industries’ spiral, was short-lived due to Mr. Edgar’s devious plan to focus the media spotlight over to Kimiko’s “Supe-Terrorist” brother, Kenji, and The Seven being needed to bring him down and save America.

Since Supes were created by Compound V and not by actual genetic material, could a hero’s specific powers be passed down to a son or daughter? That’s a damn good question, but not one that Homelander bothered asking when he hurled his son off the roof of Becca’s house, only knowing the kid had some abilities, but certainly not the full extent of them.

Homelander, just assuming his offspring would be a God among men, like he considered himself to be, wanted his boy to show signs of having all of his powers pronto. Which meant he didn’t have time for any hemming, hawing, or hesitation. Poor Ryan landed with a scary thud on the lawn, knocked cold by the impact of plummeting 20 feet.

Of course, it turned out Ryan was able to brush off that fall, thankfully, and indeed could show off more of his power set – he just needed to get protective over his mother for them to manifest.

Whale of a Tale

When The Seven rushed into action to take down Kenji, The Deep, now attempting to heal his inner scars with the Church of the Collective, was told the time was right to make his return to the hero game. Using dolphins to attack and ram The Boys’ boat at sea, The Deep thought he had the anti-heroes cornered when he blocked a beachfront with a massive whale named Lucy.

Billy Butcher had other plans though. Whale ramming plans. And it wasn’t long before he plowed his speedboat, and his team, into the belly of the benign beast! With Lucy killed and The Deep distraught, and The Boys’ crashed cushioned by – er – whale guts, Butcher’s team was able to escape.

Raynor’s chatter, right before she was killed, about there being a “coup” going on at Vought started to take shape a bit when Stormfront revealed her true homicidal, and racist, rage while stalking Kenji through an apartment complex.

Blatantly targeting and killing African-American tenants left and right, Stormfront would deliver a vile bigoted slur to Kenji right before she killed him. The loss of innocent life was, naturally, blamed on Kenji while Kimiko, who witnessed her brother’s brutal demise, vowed revenge.

Even in death, Raynor was able to help the crusade when her notes helped lead Hughie, Mother’s Milk, and Starlight to a small town to find and talk to a former hero named Liberty, who was active in the 1970s.

But what they found was a woman who, as a young girl, witnessed Liberty coldly murder her older brother for no reason except that he was Black. Vought quickly covered the entire incident up but the woman insisted that Liberty was still active. It was then that she showed Hughie and the others a newspaper image of Stormfront.

So did Mr. Edgar know exactly who Stormfront was when he put her into The Seven or is Stormfront’s past a secret from even the top Vought brass?

After watching his spotlight be stolen by Stormfront, in her move to usurp his status as star of The Seven, Homelander found himself even more fragile and sensitive than usual. Relying on a Supe named Doppelganger to provide him comfort by taking the form of Madelyn Stillwell, Homelander eventually came face to face with…Homelander.

But in the end, Homelander killed “himself,” stating that he didn’t need to be loved by anyone.