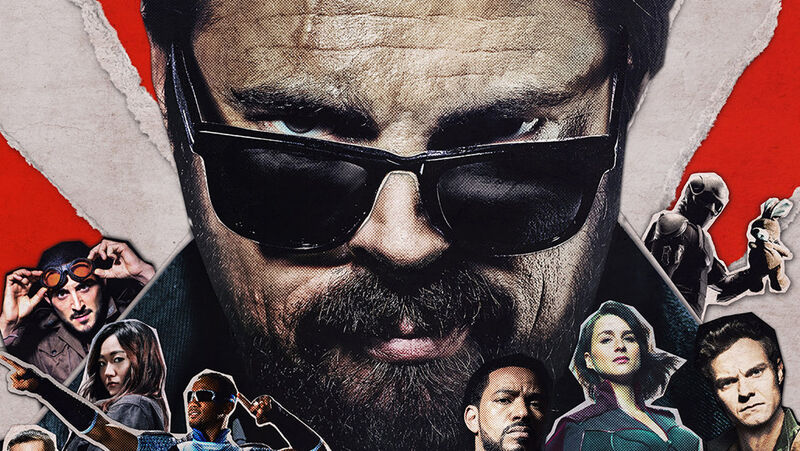 How Season 2 Changed ‘The Boys’

Warning: The following contains full SPOILERS for all of The Boys’ Season 2, including the finale…

The Boys just wrapped up its second season with a slew of stunning sequences, including one hell of a “Girls Get Things Done” showdown between our heroes and Stormfront, poor young Ryan losing his mom in a horrific manner, the reveal of a sneaky new Supe on the scene (who’s been behind all the heads going “pop!”), and – er – Homelander redefining the “caped crusader overlooking his city” moment that’s been presented in so many super-stories.

There’s no time to waste here so let’s dig into all the ways The Boys’ entire landscape just changed with the Season 2 finale, “What I Know.” Fandom spoke to The Boys Executive Producer Eric Kripke (Supernatural, Timeless) about Homelander raining down, um, vengeance (?) on the citizens he swore to protect, Billy Butcher’s decision to send Ryan off with Mallory, the surprise discovery of the “head burst” murderer, and Jensen Ackles joining the series in Season 3 as Soldier Boy !

Homelander thought he’d hit the jackpot this season. Not only did he discover he had a son he never knew about — one with super-abilities that were maybe even more powerful than his own — but he got himself a psycho girlfriend in Stormfront, who was someone who shared his homicidal contempt for regular people.

Together, given Stormfront’s ability to manipulate the media and create false narratives of fear to drum up a support base of hate, Homelander was closer than ever to playing by his own rules. After all, he literally killed an innocent person during a mission and got caught on film and nothing happened.

But then everything came crashing down when, simultaneously, Billy Butcher made a deal with Stan Edgar to rescue Ryan from his father and A-Train helped leak all the intel about Stormfront’s genocidal past to the public. Needless to say, Homelander was now back to having to let out his frustrations in private – which included an insane moment of self-pleasuring atop a skyscraper while screaming “I can do what I want!” It was…something.

“That was a scene from Season 1, actually,” Kripke shared. “It was the one scene from Season 1 that Amazon made us cut because they thought, during the early days of the show, it went too far. It was originally supposed to air in episode two. And for the record, also, it was [The Boys comic creator] Garth Ennis’ idea. He really thought Homelander would ejaculate over the entire city.”

“And so we had it in a shelf,” he continued, “and it was sort of this beautiful moment I always wish we could get in and now cut to Season 2 and we had a different final moment for Homelander and we got the note from Amazon of ‘We wish the last moment from Homelander had a little bit more punch’ and I was like ‘I have just the idea!’ I didn’t even tell them I put it back in. I put it in and sent it to them without comment. To their great credit they liked it in this context.”

In Season 3, Kripke explained that Homelander will be all out of sorts because “the woman he loved was cruelly ripped away from him, his son, who he genuinely loved, rejected him. Maeve, who he loved, and who at least assumed was his best friend, turned out to have betrayed him. He’s got Starlight next to him. From his perspective he’s persecuted. And he’s surrounded by vipers. He’s quite the self-pitying sort. I think in Season 3 there’s an incredible amount of pressure building inside of him that will explode.”

A Neu Supe in Town

Though it was never confirmed, Billy Butcher’s gang were all but convinced that it was Stormfront going around and making people’s heads explode. After all, who else would want to silence Susan Raynor while also faking a giant public Supe-Terror attack on the government? Someone who was trying to create an army of white suprmacist Supes, that’s who.

But it wasn’t Stormfront. Sure, she could burst open people’s melons with lightning if she wanted, but the Supe behind these malicious murders obviously used some type of telekinesis.

That Supe turned out to be none other than the young and charismatic anti-Supe warrior, congresswoman Victoria Neuman. Yes, the politician who rose to prominence after Compound V was revealed to the world. A crusader willing to take on Vought International and its privatised lock on superpowers.

“A big storyline in Season 3 is unpacking why she’s doing what she’s doing and hopefully it won’t be what the audience expects and there will be some more surprises behind her motivation.” Kripke explained.

“In terms of this season, I’d be lying if I said [the choice to make her the killer] wasn’t just screenwriting math,” he added. “You look for the character who people will least expect. We knew from the beginning it would be her. The writers’ room pitched the idea that the person we would least expect would be that character and then we started going into a backstory that would, in hindsight, once you hear it all, it’ll make perfect sense.”

Carry On My Wayward Soldier

Speaking of Victoria Neuman, played by Timeless’ Claudia Doumit, several stars from Kripke’s past projects have popped up on The Boys. And a big Kripke-verse name is coming to Season 3 when Supernatural’s Jensen Ackles, after playing Dean Winchester for 15 seasons, joins The Boys as a Supe called Soldier Boy, who was mentioned briefly by Stan Edgar in Season 2.

“Jensen is an amazing actor and an even better person and obviously we’re very close and I think I have as good an idea as anybody of what that guy can do,” Kripke said, of his decision to onboard Ackles into the crazy, warped world of The Boys.

“I’m constantly impressed because he can handle comedy, drama, action, and romance,” he added. “So he felt like the perfect choice for a guy, Soldier Boy, who’s really charismatic, who’s really been a fixture of American culture for decades. But of course, the show being the show, there’s darker stuff on the inside. And the other thing I think Jensen and I are excited about, beyond the ability for him to swear a lot, is presenting a different role for him. It’s a very different character and he has a lot of darkness in him but he’s also still charming and funny. I think people will be surprised and will love it.”

After a season of desperately trying to find his wife, Becca, so the two of them could run off and hide together, Billy watched Becca get killed – with Ryan somewhat responsible, even though he was attempting to save her from Stormfront, who was about to murder Becca herself. Would this be the tipping point for Butcher, who was quick to dismiss Ryan earlier in the season, only wanting Becca by his side, rather than Homelander’s kid as well?

Well, we don’t know how much personal responsibility Butcher will take for Ryan going forward. We do know that he loved Becca enough to honor her dying wish, which was to keep Ryan safe. So Billy winds up sending Ryan off in the care of former CIA head Grace Mallory.

“I think [Ryan will] be in a healthier situation guided by Mallory than Homelander was in a lab with Vogelbaum,” Kripke teased. “That said I think the Butcher we’ll find in Season 3 is really a man at war with himself because as we saw this season there are parts of him that are human. There are parts of him that know that the boy is the last surviving piece of Becca, and he wants to do right by him. But then there’s another part of Ryan that’s represented by his father that’s just toxic masculinity and rage and fury and violence. And those two sides of Butcher will really be at war in Season 3.”