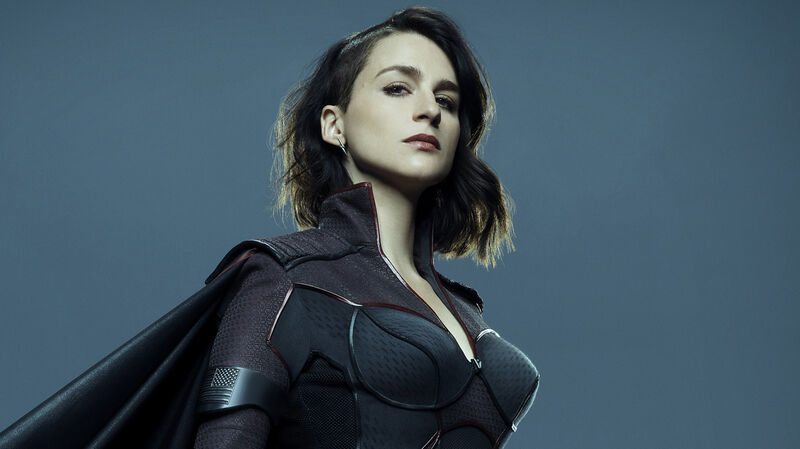 ‘The Boys’: Stormfront’s Importance to the Story in Season 2

Though there are many, ways Amazon Original The Boys is raising the stakes and sweetening the pot for its second season, the biggest wild card of the bunch is Stormfront, played by Aya Cash (You’re the Worst).

Introduced as a media savvy, seemingly “tell it like it is,” candid type, who couldn’t mask her disdain for some of the more controlling aspects of life as part of The Seven, she is now revealed as a lightning bolt-hurling, murderous hate-monger who’s more than willing to swipe the spotlight from The Seven’s unhinged leader, Homelander.

In Season 2, Stormfront is creating cruel crosswinds that neither The Boys or The Seven appreciate. But can anyone stop this pint-size powerhouse of pain? Let’s take a closer storm watch at The Boys’ new scandalous Supe and how she’s rocking the boat in all the right (er, wrong) ways.

With Translucent’s death publicly revealed and a heavily-attended funeral held so that the world could mourn, a slot officially opened up in The Seven. With Seven-wrangler Madelyn Stillwell also gone, Homelander naturally thinks he’ll get to choose the next member himself. And Madelyn’s replacement, Ashley, finds that out the hard way when she tries to make the pick herself and Homelander horrifically maims her hopeful recruit.

But then, on Mr. Edgar’s orders, Stormfront arrives on the scene, with neither Homelander or Queen Maeve having advanced knowledge of her official membership. As the newest member of The Seven, Stormfront almost immediately ruffles feathers with her insistence on live-streaming her arrival on social media and her callous manner of communicating to her teammates. And thus begins The Seven’s historic first era with three female members!

Right out the gate, Homelander has serious issues with Stormfront after she ambushes him, filming him no less, to announce the fact that she’d joined The Seven. Homelander thought he’d be in charge of picking his newest teammate so it took everything in his power to keep his composure when Stormfront saddled up to him and stole his thunder.

“That was a real punch for Homelander, having someone coming in,” Aya Cash said at the TCAM 2020 press tour this summer. “I think, irrespective of her gender, it would have been pretty much a huge problem for him no matter what but there’s definitely that old-fashioned attitude of not wanting to be told what to do by a woman.”

As for how Stormfront sees the situation, Cash added, “I lean more into it and more into the angle that Homelander just is an extremely weak figure emotionally and just can’t handle the fact that there’s this new, hot, young chick coming in with reckless abandon and doesn’t respect him and doesn’t fear him, and presents him with a whole new set of challenges that he doesn’t really know how to cope with. So she’s actually the instigator of tremendous evolution.”

By the third episode of Season 2, after Stormfront brutally murders Kimiko’s brother, Kenji, she shows her ultimate disrespect for Homelander, away from the cameras, by calling him “Gramps,” not caring at all that he gave an order that he should be the one to take care of Kenji.

The Storm and The Star

Homelander isn’t the only member of The Seven to recoil a bit at Stormfront’s blunt nature. Starlight, though actively trying to take down Vought International and The Seven from within, also collides with Stormfront’s unpolished prickliness.

While doing numerous media rounds, in order to promote Stormfront as The Seven’s newest hero, and hype up the fact that the team has more girl power than ever, Starlight discovers that Stormfront thinks of Starlight as a sellout.

Finding Stormfront’s honest, unrehearsed answers refreshing at first, Starlight soon realizes that Stormfront thinks of her as a ditsy shill for The Seven with no mind of her own. Through this chat, Stormfront reveals that the reason she acts the way she does is because she doesn’t care what anyone thinks of her. It’s a mindset that started when she was young and worshipped at the altar of Pippi Longstocking, and that fictional heroine’s fierce independent spirit, and not Supes like everyone else.

Of course, Starlight’s perspective on Stormfront is likely about to change considerably, given the truth about Stormfront’s tactics and beliefs.

In the Garth Ennis comic series The Boys is based on, Stormfront was a male fascist Supe, created by Nazi scientists under Hitler, using Compound V. Raised as a Hitler Youth, Stormfront grew up with a hatred of all non-Aryan races. Eventually shipped off to America, this psychotic, controlling Supe joined the world’s second-place hero team, Payback.

On The Boys TV series, Stormfront has been gender-flipped and is also now a part of The Seven. Regarding the gender swap, The Boys Executive Producer and Showrunner, Eric Kripke, explained, “We wanted to create Homelander’s worst nightmare and his worst nightmare would be a strong woman who wasn’t afraid of him and proceeded to steal his spotlight. I think that would hurt him way more than if it were a male character because he has a gaping hole of insecurity.”

Another reason for the gender change was to reshape some of Stormfront’s ugly hate-mongering. As Kripke put it, “She has certain hateful ideologies and the truth is there’s a lot of hate and negative thought these days if you look online that is packaged in really slick social media attractive ways. It’s not like old dudes with crewcuts in the 1960s newsreels anymore. It’s very real and slick. We sort of wanted to reflect how insidious that is.”

After three episodes, we’re still not sure what Stormfront’s full backstory is, and if it aligns with the comics, but the character’s vile racism has now been revealed. In the shocking finish of the third episode, Stormfront kills Kimiko’s brother, Kenji, but not before slingling an awful racist slur at him. And during her rampage to get him, she straight-up slaughters the African American residents of the apartment building she stalked through.

So not only does Kimiko have a massive vendetta against Stormfront, for the murder of her brother, but Homelander’s not too pleased with his new team member either. Will Stormfront, with her heinous ideology and disregard for public relations, rub too many people the wrong way to stay safe within the world of The Boys? We’ll have to wait and see.