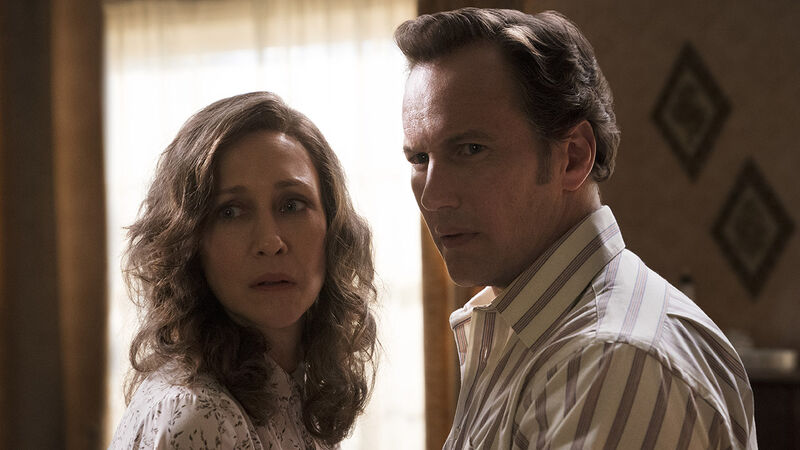 The Real Life Story Behind ‘The Conjuring: The Devil Made Me Do It’

Having become one of Hollywood’s most successful franchises in recent years, The Conjuring series’ next chapter arrives in June with the release of The Conjuring: The Devil Made Me Do It. The new release is simultaneously the third Conjuring-specific film and also the eighth film in the expansive Conjuring franchise, which now includes multiple spinoffs and has brought in $1.9 billion in combined ticket sales. Once more inspired by the real life cases of married paranormal investigators Ed Warren and Lorraine Warren (Patrick Wilson and Vera Farmiga), the new film is based around events surrounding the 1981 trial of Arne Cheyenne Johnson, who killed his landlord but claimed the reason was… well, it’s right there in the title of the movie.

I recently paid a visit to the Warner Bros. lot for Fandom, where I was among a small group of journalists shown the first 11 minutes of the new sequel, before speaking to director Michael Chaves, who previously helmed another film in the expanded Conjuring Universe, 2019’a The Curse of La Llorona.

I should note this was the very first in-person press event (drive-in screenings aside) I’d attended since the beginning of the pandemic, making it a very notable experience. The visit was done under strict Covid guidelines – essentially the same rules anyone working on a studio lot have to follow these days, which included a rapid Covid test prior to being cleared to come onto the lot and staying masked and socially distanced the entire time.

Read on for what was shown and discussed about the next step in the ever-growing Conjuring Universe, how much of the story is true, and how the film touches upon a time when law enforcement regularly worked with psychics like Lorraine Warren.

The intense opening sequence of the film was screened for us, which jumps right in with Ed and Lorraine present for the exorcism of David Glatzel (The Haunting of Hill House and WandaVision’s Julian Hilliard), a young boy who has become possessed. In the midst of increasingly chaotic events, Arne (Ruairi O’Connor) – the fiancé of David’s older sister, Debbie (Sarah Catherine Hook)  – makes a desperate attempt to save the boy by pleading for whatever is possessing David to take him instead.

In real life, just two weeks later, Arne would kill his landlord, leading to the oh-so unique turn of events of his lawyer standing up in court and saying his client was pleading “not guilty by reason of demonic possession.” Chaves stressed that he wouldn’t describe The Devil Made Me Do It as a court case movie, as the trial itself is more of a backdrop to the Warrens’ investigation, but that moment with the lawyer is in the film and the director recalled some test audiences being sure that really didn’t happen when “it 100% did – and his lawyer and the Warrens stood by that.”

While acknowledging they do take liberties in their version, Chaves stressed, “A lot of it is [real]. The crazy stuff, the most extraordinary stuff from the stories is in the movie.” This included that exorcism, which Chaves noted, “Was a catholic approved exorcism. They sent two priests there. We took the liberties of just making it one priest, and he’s Father Gordon because he’s the priest of The Conjuring movies — we need him in this movie — but it was based on a real event and there was a real recording of it and we actually play that recording over the end credits.” We were then shown the closing credits of the film with that audio recording of the actual exorcism, which makes for an unnerving experience to hear, and which Chaves revealed was played for the cast and crew before they shot their exorcism sequence.

Dramatically speaking, Chaves liked beginning the film with the big exorcism sequence one might expect would be a Conjuring movie’s conclusion and said that as the film continues, “The Warrens make an assumption about what it is [that is occurring] and they learn that they’re wrong and they learn that there’s actually something else going on and that’s kind of part of the journey; their assumptions are tested and their faith is tested as they go into this.”

Chaves was asked how much of this story, the two possessions included, he believed, and remarked how The Conjuring: The Devil Made Me Do It stands out from the other films in the series because typically, there aren’t any physical victims, but “With this, there’s a real victim, there’s a real man who was murdered, and even though I was elated when I got this script and I was losing my mind excited to direct this movie, I was also conflicted with the fact that there’s a real man who died here and I want to tell this story right. I want to, of course, make an awesome, terrifying story but I also want to be mindful of the real tragedy involved here.”

“It’s kind of easy when no one gets hurt to stake a claim in your belief,” Chaves remarked, adding, “It becomes a lot harder when you have real victims. Ultimately, what I decided for the film is that my personal belief of what happened has to take a backseat to the Warrens. This is ultimately their story and they believed in this guy and they stuck by him. They put their careers on the line, they went to trial, they testified in his defense and they believed in him deeply. His wife, Debbie, who just passed away, she believed in him as well, she was there at that exorcism, she was there at the murder, she testified in his defense that he was possessed, that he was behaving in a way that she’s never seen before and she stood by him up until her last days.”

Chaves said he felt, “These movies are always kind of stories about faith and the easy assumption is it’s just the faith in God, but as I was wrestling with this, it’s also the faith that we put in other people, the people that we love and our partners and the people that we choose to spend our lives with, and that personal faith and that leap of faith that we take.”

WELCOME TO THE 80s

The previous two Conjuring films were set in the 1970s, along with other Conjuring Universe films like Anabelle Comes Home and The Curse of La Llorona, but while some of the other movies in the franchise have taken place in earlier decades, The Devil Made Me Do It will take place further into the timeline than any other story has so far, in 1981.

As Chaves put it, “We’re seeing this new chapter in the Warrens’ life and in their career. In the early 80s, that was the dawn of the satanic panic and it was also a time in their careers in real life where they’ve become famous and infamous and Lorraine actually became so well-known she started working with police departments and detectives in missing persons cases. That’s one of the threads of the story that we get into.”

Chaves elaborated, “In the 80’s, you had psychics and clairvoyants actually working with detectives, so much that the Department of Justice actually issued this handbook for police departments to work with psychics. You can look on their site and it’s actually archived there, it’s a pdf you can get, and it’s really insane and it’s the backdrop of this movie.”

He added that while they didn’t choose the era as much as follow the events from real life, “I think there’s also something really welcoming about setting a film in that time period because you don’t have cellphones and you don’t have a lot of those distractions that we have now. If you look at a horror movie there’s usually some kind of conceit about ‘Why does the cell phone not work!?’ And it’s kind of just great to kind of tell a story in a time period where you don’t have to worry about that.”

There is a shot in The Devil Made Me Do It’s opening sequence, which can be seen in the film’s trailer, as Father Gordon (Steve Coulter) arrives to perform the exorcism, that is clearly meant as an homage to The Exorcist’s iconic image of Father Merrin walking up to the home in that film.

When I asked Chaves about embracing the fact that if you do an onscreen exorcism, people will think about The Exorcist, he nodded and replied, “it was impossible to dodge that. I think that, from the beginning, The Conjuring movies are these love letters to horror cinema. You can see so much of The Changeling in the first Conjuring. I was like ‘We can’t do an exorcism, especially the exorcism of a young child. without doing a little bit of a nod to [The Exorcist].”

Chaves actually then began to second guess himself, explaining, “It’s funny, because I was about to take it out. It was right before a screening and I was about to take it out because I was like, ‘Oh, it’s too much on the nose. That’s almost too bold of a move.’ But I left it in and I’m really glad I did because after the screening, I think the people who know and love that movie really responded to it because I think it’s a conversation. This is kind of a conversation with horror fans. We acknowledge our past and we’re also kind of referencing that [past] with these movies.”

The Conjuring: The Devil Made Me Do It debuts June 4th in theaters and on HBO Max.