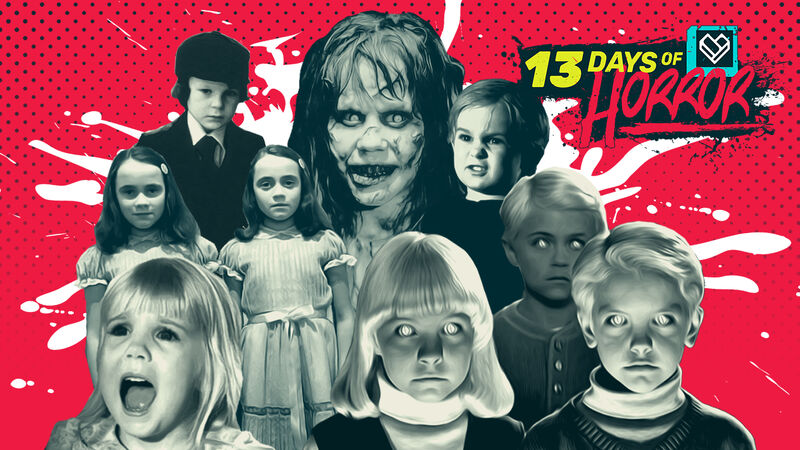 The Creepiest Kids in Horror Movies

Sometimes they’re used to project the notion of innocence. Sometimes they’re deployed as a plot twist, because you’d never expect Junior to stick a knife in your back would you? And sometimes, judging by the vast amount of young women on this list anyway, there may well be a big slab of institutionalised misogyny at play in their usage too. Whatever the reason for their omnipresence, children have been a fixture of horror movies since video cameras first started rolling, and in many cases, they’re the most terrifying things about said films.

In tribute to that most recent child-centric horror, Hereditary, and the remarkable turn of young Milly Shapiro, what follows are 16 examples of the creepiest kids in horror. There is, frankly, no better contraception than the examples that follow (this isn’t strictly true, condoms are miles more effective — please don’t use this list as your preferred method of safe sex, or you too may end up with a demon child in nine months’ time).

Of course, it isn’t really 12-year-old Regan’s fault that she’s frightening. The demon inside her has an awful lot to do with that. And we mean both the literal demon, Pazuzu, as well as the metaphorical demon of impending womanhood that is woven into the film’s subtext. As well as all the pea soup that she can’t keep down, of course. It’s a nightmare stain to get out, is pea soup. Gets right in the fabric, so it does.

The 1956 adaptation of William March’s novel of two years prior centres around the ‘nature/nurture’ debate, and concerns Rhoda, an all-American, eight-year-old fledgling serial killer, played superbly by Patty McCormack. In the book, Rhoda receives no punishment for her crimes, but thanks to the Hays Code – a pre-Motion Pictures Association of America (MPAA) ruling enforced in film studios between 1930 and 1968, meaning, among other things, that characters weren’t permitted to get away with their crimes — she ends the film being struck by lightning.

Who’s here, Carol? The delivery men? Jehovah’s Witnesses? The old lady from next door who’s a bit lonely and sometimes pops around under the premise of asking if she can borrow a “drop of milk”? Oh, none of those people. It’s ghosts. Bad ones. Great.

Twins get a rough deal in pop culture, and their utilisation as a horror trope has become a lazy one, thanks in large part, to the extremely effective use of Lisa and Louise Burns in Stanley Kubrick’s 1980 classic, The Shining. Kubrick’s framing of the real-life twins has been said to echo outsider photographer Diane Arbus’ 1967 iconic ‘Twins’ photo. Kubrick’s widow Christiane says that wasn’t his intention, but it seems well sus to us.

A basic rule of horror filmmaking is what you can’t see is normally scarier than what you can. And while we never get to actually see Rosemary’s baby, Adrian, Mia Farrow’s anguished cry of “What have you done to its eyes?” does everything — and more — a visual would have.

El, Let The Right One In

Long before he directed 2017’s The Snowman, aka the best-worst movie ever made, Tomas Alfredson’s 2008 adaptation of John Ajvide Lindqvist’s debut novel had him on track as one to watch. This romantic-tinged tale of a lonely boy and his vampire mate, was adorable, if you were to overlook undead El’s solution to most problems: to dismember anything that gets in the couple’s way. And, if we’re being honest, poor old Oskar was totes being groomed to be El’s mortal servant.

Who would have thought that wet hair could be so frightening? Yet the lack of plug points at the bottom of that cursed well helped create a horror icon. One who inspired a batch of copycats.

It’s never really made clear why the ‘666’ birthmark that reveals Damien to be Satan’s son, wasn’t discovered when, y’know, Damien was a newborn. He can’t have been born with that nest of brown hair up top. Note to all parents: if your child’s nanny leaps to his or her death, shouting, “Look at me, Damien! It’s all for you!”, take your child for a short shave immediately, even if they’re not called Damien.

In fairness, poor little Tomás isn’t the villain in J.A. Bayona’s debut feature. What he most certainly is, however, is this 2007 horror film’s defining, and indeed, most chilling image. My god, child, that sack you have put on your head really is the most upsetting thing we think we have ever seen.

Burying your child in a creepy graveyard for pets is literally one of the most stupid things a parent can do, as the scalpel-wielding zombie child Gage proves in this 1989 adaptation of the Stephen King novel. Incidentally, the song that plays over the credits, the Ramones’ specially written “Pet Sematary”, is an absolute jam.

Oh look, it’s Gertie from E.T! She was so cute and so nice. Oh no, why is there fire coming out of her? By the way, this 1984 science-fiction horror is another Stephen King adaptation, suggesting that Stephen’s view on childhood, might just be a little bit more nuanced than most.

The Children, Village Of The Damned

With apologies to John Carpenter, it’s the 1960 Wolf Rilla-directed version of this John Wyndham novel (published as The Midwich Cuckoos) and the film’s blonde mini-moptops that chill us most. They’re aliens, yes, but give us a xenomorph over these horrible pre-school bastards any day.

There’s a twist in this 2009 movie that basically renders Esther, played remarkably by Isabelle Fuhrman, as being ineligible for this list. Yet said actress was a child at the time of doing so. This is quite confusing, isn’t it? Good movie, though terrible advertisement for fostering.

It’s worth pondering whether the words ‘porcelain’ and ‘doll’ have ever sat next to each other at any point in history without the end result being terror. This underrated 2016 horror features a porcelain doll named Brahms, who, for the majority of the movie, the viewer is led to believe might be possessed. The truth is much more frightening, and comparatively, makes Annabelle resemble a Barbie Doll.

This proto-slasher movie from 1976, features a 12-year-old antagonist who wears a yellow raincoat and a translucent mask. A porcelain doll – See! See! — features early in the movie, and nothing in any way, shape or form that could be described as nice follows from that point onwards.

Probably the most adorable fixture in this list, Toshio loves cats, and doesn’t even physically hurt anyone. He’s more a stand-around-and-spook-you sort of dude. He’s kind of a forewarning that something terrible is about to happen, rather than actually being the person who’s going to be doing the terrible thing. Sort of like the guy who voices the opening to Love Island, if you know what we mean.